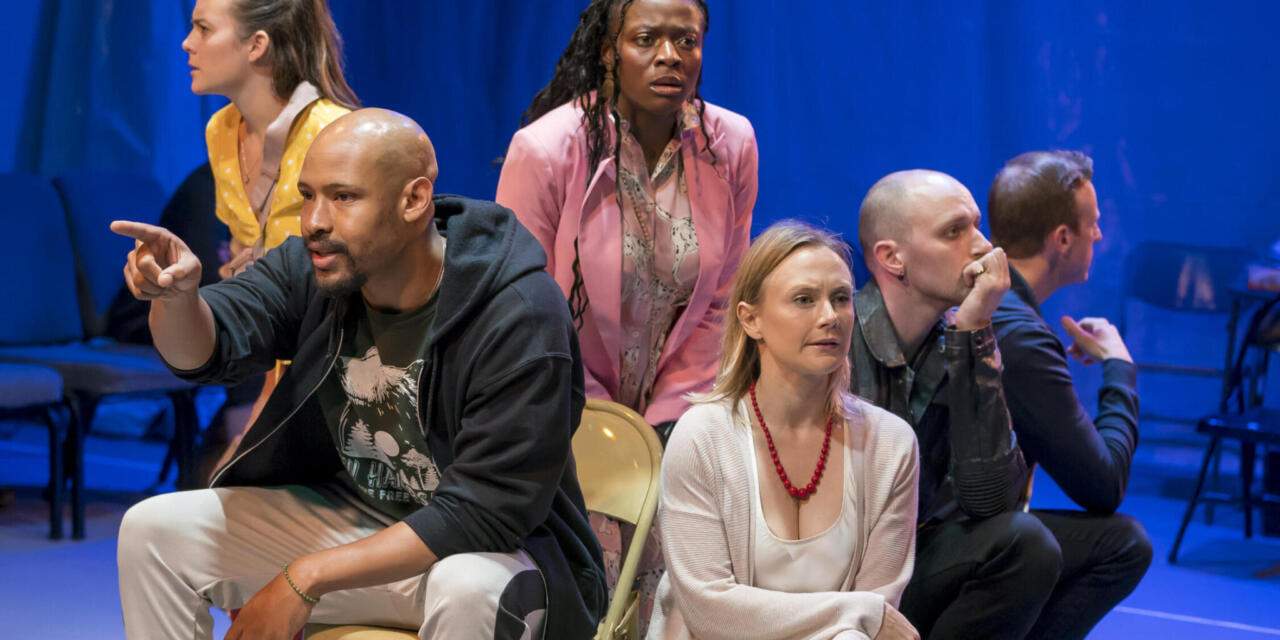 Cast of The Strangers Cane Today. Photo by SOCIETY.

How is theater like a support group? This question struck me upon entering The Strangers Came Today, which recently concluded its run at New Ohio Theatre in New York City. The play by Emily Zemba and directed by Violeta Picayo appeared in rep with Beginning Days of Jubilation, and both SOCIETY productions featured much of the same cast members. And yet, this cast seemed perfectly suited to this play and its conceit. The play begins just as a meeting of a unique support group is about to begin. Margaret, played by Caroline Grogan, and Matt, played by Tim Nicolai, welcome audience members and characters alike into the space to hear stories. I’m a big proponent of “experiential dramaturgy,” the dramatic structures that weave audience experience into theatrical narratives. This process starts with onboarding, bringing the audience into the world of the show.

The Strangers Came Today offers a masterclass in onboarding. First, the front-of-house staff encourages audience members to write down a mystical experience they had on a provided notecard. Then, once audience members enter the space, Grogan goes around the semi-circular with a jar and collects the responses and offers a second, third, and at the performance I attended, even a fourth chance for people to write down their memories, providing notecards and pencil and finally a button as a little prize upon receipt of the notecard. The onboarding works so well because it contains multiple catch-points. The extroverts in the audience may write their memories down immediately, while the introverts may do so only when they see others do so and receive a small prize. As an extroverted introvert, I provided my memory after seeing the jar, knowing then that I wouldn’t get called on to deliver it myself.

Now, I don’t want to spend this whole review talking about the audience onboarding. Still, it does set a strong tone for the rest of the show and serves as a perfect example of how shows can tailor interactivity to various comfort levels. Regarding acting, Margaret’s role calls for someone who’s part performer, part improviser, and part front-of-house. Grogan juggled these effortlessly in welcoming audiences, interacting with them, and guiding them into the show. I genuinely wasn’t sure if she was cast or crew when she first appeared. Nicolai then takes over as Matt, the facilitator of the support group. While his opening monologue is delivered a little more actorly, Nicolai also engages directly with the audience, bringing us into the fold and confiding in us.

Once the rest of the performers arrive, the staging of Picayo has them sitting in chairs in a circle, effectively becoming the inner circle of the audience seated around them. I wouldn’t agree with the marketing that this is immersive theater-an overused term-but I definitely think the production blurs the boundaries between audience and performer. All of the characters are people who had some type of brush with something they couldn’t quite explain. And as the notecard prompt suggests, who hasn’t?

Most of the show consists of the various characters sharing their personal story of this kind of phenomenon, whether of a paranormal, spiritual, mystical, near death, or simply baffling experience. Here, Zemba’s script carefully walks the tightrope between the believable and the ridiculous. After all, that’s where a lot of these tales live. A particular standout involves Jennifer Mogbock as Gracie getting fired for nude pictures leaking. The HR Manager seemingly empathizes by saying that everyone has nudes, then corrects himself by saying that he didn’t mean that literally, as he never gets naked as a rule. Mogbock conveys the emotional whiplash of a clinical yet overcomplicated situation, aided by Picayo’s abstract yet humorous staging of a seated supply chain of interns and assistants passing down coffees.

Likewise, Lilly of the Valley, a self-professed “shamanista” played by Alexandra Templer, walks this fine line between the believable and the ridiculous. With a put-on “soothing” accent that suggests Canada, California, and Scandinavia, Lilly invites consumption of her meditative content and support through Venmo. Thanks to Zemba’s writing and Templer’s performance, Lilly simultaneously comes off as simultaneously a parody of the self-help gurus of the internet age and yet perhaps also the real deal. She’s the poster child of post-irony.

It isn’t immediately clear what she has to do with the plot, and alongside all the unexplainable phenomena that the play covers, The Strangers Came Today sometimes bites off more than it can chew. Halfway through the play, a new character named Carla joins the support group. An aggressive anti-authoritarian who carries around a large potted plant, Carla feels like the bizarre lovechild of John Goodman’s character from The Big Lebowski and The Log Lady from Twin Peaks. Rosa Gilmore appears to relish the delightfully enterprising role, really playing up their antics, yet the addition doesn’t meaningfully shake up the group dynamics. The collected notecards also feel like a missed opportunity, as only one gets read aloud, yet the cards do have an in-world explanation.

I won’t spoil it here, but the cards hint at one of the two ingenious twists that The Strangers Came Today offers. The first twist justifies the experiential nature of the show with its meta-theatricality. Meanwhile, the second twist entirely reframes the support group’s purpose, and Brittany Vasta’s clever scenic design literally pulls back the curtain on what inspired the gathering. The penultimate scene reigns in the show’s focus and ties everything together, although the final short scene does leave some questions unanswered. But for the most part, The Strangers Came Today poses thought-provoking questions about, well, what it means to have questions. Some things in life don’t have easy explanations or meanings, and The Strangers Came Today gleefully and thoughtfully plops down in this space of uncertainty and welcomes the audience to sit in it for a while. We may not always get answers, but The Strangers provides worthwhile company.