“Road” at The Royal Court 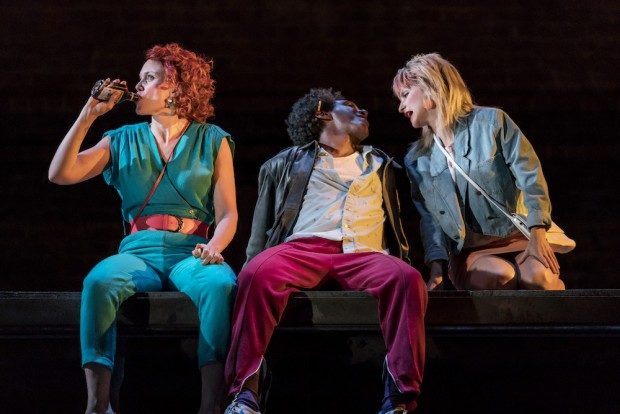 Some legendary plays are a disappointment when you see them again — they don’t live up to the hype, or to your memories of seeing them for the first time. Jim Cartwright’s Road is not, I repeat not, one of those letdowns. It remains as fresh, as powerful and as beautiful as its reputation says it is. It buzzes with energy and reaches deep inside you. It is funny, and at the same time so, so sad. It’s a masterpiece. So it’s great to see the Royal Court reviving a modern classic from its own past. Road was first staged here, in the studio space, in March 1986, before moving down onto the main stage in June that year, and then returning, with punk rocker Ian Drury in the role of the narrator Scullery, in January 1987. Now, this revival by the wonderful John Tiffany features broadcaster and poet Lemn Sissay as Scullery.

Set on a nameless road in a small Lancashire town on one hot night of bingeing, fighting, sexing and vomiting, the play presents a panorama of Northern working-class life in an era of mass unemployment, although, it has to be said, because it is poverty that is the key condition the piece hasn’t aged one bit since the mid-1980s. Cartwright uses the drink-loving petty thief Scullery to introduce his cast of characters, which include Joey and Clare, a young pair who starve themselves, Carol and her nagging mother Brenda, old Jerry, who longs for the past, Molly, a pensioner with Alzheimer’s, and Valerie, who despairs of her unemployed husband.

We watch as some of the characters prepare to go out, then visit the local pubs, then come home drunk. In one heartrending scene, Helen brings a squaddie home with her, but he is too drunk to speak, or to have sex. Similarly, when Brian brings Marion home with him, his clumsy seduction is interrupted first by the fact that she wants something to eat, and then by the appearance of his 12-year-old daughter (here played by the same actor who plays the OAP Molly). Then there’s Brink and Eddie, young men with a passion not just for women, but for soul music too. In another monologue, a young skinhead talks about violence. But equally strong are the quiet scenes which show characters marooned at home. Most famously, Joey and Clare slowly starve themselves out of a despair almost too deep for words.

Starting with a blast of Judy Garland’s ‘Somewhere Over the Rainbow’, which gives the show just the right feel of a certain kind of piquant nostalgia, Cartwright’s text is a punchy account of working-class experience, with its putdowns, its swearing and its catch phrases, but his writing also gleams with bright shards of poetry. Joey says, “The world’s a fat toilet”, while Carol complains, “Poverty wants me. He’s in my hair and clothes. He comes dust on me knickers” and her friend Louise says that the world is so tough “It’s like walking through meat in high heels.” The rhythms of the speech are realistic, but — like every great playwright — Cartwright has supercharged the content.

What’s both stunning, and in the end moving, is that this 1980s state-of-the-north play is still so relevant. Tiffany has cut the Professor character, whose “anthropological” study of unemployment dates things a bit, and the result is as fresh and febrile as any new play. What comes across most strongly is the dehumanizing effects of poverty and the social alienation of the road’s inhabitants. This is not a lame piece of journalism, but an impassioned and totally empathetic account of poor people, of how it feels to be at the bottom of the heap. The evening throbs with the resentments, the fantasies and the sheer anger of the urban poor. In the era of Brexit, this is alive with relevance.

On the one hand, there are the people whose desperation is close to boiling point, who are angry and near to the edge. On the other, there are those so impoverished that they have faded back into themselves, with only the consolations of nostalgia to keep them company. The old ones look back, not in anger but in grief, while even the youngish Valerie cries out: “Can we not have before again?” All of them drink not to get high, or for pleasure, but to achieve the solace of oblivion. Not to have to think any more. At one point, Clare asks Joey about their bid to starve themselves: “Are we protesting?” They are, in their own way, but this is not a play about collective struggle. It’s a vision of isolated human beings searching for connection, for meaning, for answers. And it ends, with a little help from pop music, on a glorious note of supreme transcendence.

Tiffany’s production, designed by Chloe Lamford, features a glass cube, which rises from the ground and suggests a claustrophobic room, in which the characters are trapped in what seems like a grubby goldfish bowl. He also adds some neat touches, mainly moments of balletic movement in the scene changes, and some delicious fragments: a young woman kicks off her heels and does a brief exercise in ball control with a battered football, Scullery dances with a supermarket trolley to the stentorian chords of Swan Lake. But, above all, it is Tiffany’s version of the climax, with Otis Redding’s ‘Try a Little Tenderness’, followed by a beautifully choreographed sequence, that stays in the memory. Brilliant. It’s simply magic.

And Tiffany’s cast is excellent. Sissay’s imposing Scullery swaggers smoothly and takes the audience by the hand, while Dan Parr (Brink), Mike Noble (Eddie), Liz White (Carol) and Faye Marsay (Louise) make the last scene really sparkle. Mark Hadfield and June Watson give the two older characters a convincing sense of solitude and depth, while Noble’s Skin-Lad monologue is mesmerizing. Shane Zaza and Marsay bring a gentle seriousness to the death-seeking lovers, while Michelle Fairley, who plays three women, is particularly memorable in her scene with the drunken soldier. This is a haunting, compelling and above all thrilling revival of a Royal Court classic.

This post originally appeared on Aleks Sierz on September 6, 2017. It has been reposted with permission.