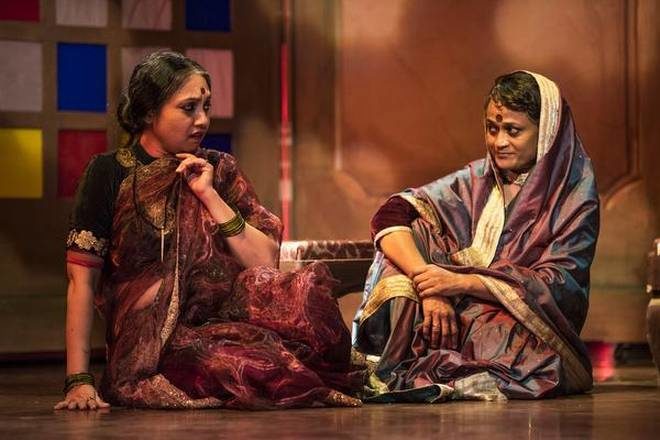 The various signposts of a woman’s life find striking expression in the songs that have graced the Mumbai stage in recent years. Often, they are sung by characters who are performing artists in their own right, sprung from the wellspring of classical traditions. From childhood to senility, women chart a musical journey that is complex and rich certainly, but also predictable and archetypal. Yet, the wealth of melodies bequeathed to these time-worn paragons cannot be as easily disregarded.

In Atul Tiwari’s Taoos Chaman Ki Myna, set in the strife-ravaged Lucknow of 1857, the most untouched of characters are Falak Ara (Vianca Verma), the daughter of a bird-keeper and perhaps, the befuddled Nawab Wajid Ali Shah himself, from whose royal aviary the former’s father borrows a mynah to keep his daughter company. The bird is immediately named Falak Myna (Afsana Ahmed). Verma and Ahmed sing two irrepressible ditties composed by Amod Bhatt — “Falak Ara Shezaadi ki Main Pyari Chhoti Behna” and “Le Jaoongi Tujhe Dikhane” — as their secret excursions take them across Lucknow in a giant sweep of imagination. It is an ebullient expression of childhood, full of the open-heartedness that comes as easily only to the truly young.

Similarly in Purva Naresh’s Umrao, based on the famous (if partly apocryphal) courtesan who flourished in 19th century Faizabad. The child Umrao (Trisha Kale) is sold into a bordello, but she is allowed to hold on to the innocence of a young dreamer, even if all she desires is a knight in shining armor (as represented by her rag doll). Later, Neetu Chandra, as the older Umrao, finds herself shuffled between men, even if they are all suitors after a kind. When Chandra “sings,” she is “backed” live by Kale’s more virginal vocals, as if to suggest that Umrao’s singing draws out her purest side. Two numbers composed by Rekha Bharadwaj stand out. The first is the mujra “Kadar Ulfat Mein” by Nida Fazli, that Kale sings when Umrao feels the first flushes of love. The second is the stoic “Ishq ke Sajde” by Niranjan Iyengar, a paean to unrequited love as it were.

Of course, as the tamasha artistes of Kali Billi Productions’ Sangeet Bari amply demonstrate, the narrative of desire can be controlled by women, if only ephemerally. The production benefits from the presence of formidable lavani doyenne Shakuntala Nagarkar, who conjures up an interface between men and women by breaking down conventional notions of propriety. There is a regal power to her coquetry, as she holds court with tried-and-tested routines embellished with improvisations that give them a quality that is impossibly “here and now.” But, the production’s rare lavanis perhaps find the most mellifluous expression in the voice of the understated Pushpa Satarkar. The lavani artiste sits herself down in the middle of the stage and negotiates the lower reaches of melodies with a delicacy of delivery that almost elevates this unmilled idiom into fine art. Some of her solo numbers include semi-classical lavanis, like the subtle “Naka Dharu Haath” (“Don’t Hold My Hand”), and “Kashi Kelis Majhi Daina” (“What Have You Done to Me?”) drawn the from traditional sangeet natak repertoire. At a recent performance of Sangeet Bari at Prithvi Theatre, helped in part by the venue’s wonderfully unplugged acoustics, Satarkar was able to create the illusion of an intimate and private baithak.

Similarly, softness is of the essence in Geetanjali Kulkarni’s quieter moments in the otherwise ribald Twelfth Night adaptation, Piya Behroopiya, directed by Atul Kumar. Her character, Viola, spends her time disguised as a man employed as an emissary for a lovelorn Duke, who she has herself lost her heart to. When she lets her hair down, and sings a lament of transfiguring beauty, her doleful vocals suggest not just the exertions of unrequited love but the strain of being denied her femininity. The song in question is “Chok Puravo Mati Rangavo,” the popular ballad by Kailash Kher.

Gagan Dev Riar and Sukant Goel’s riotous musical Ishq Aaha, based on the love legends of Punjab (like Sohni Mahiwal, Heer, and Mirza-Sahibaan), boasts of a strong ensemble in which female characters emerge as women of agency, even if they cannot wholly extricate themselves from an all-pervasive male gaze. The musical line-up, which includes folk numbers, qawaalis, and original compositions, provide the female actors a melodic land of their own, denied to the men. The zestful qawaalis especially, some most famous in Nusrat Fateh Ali Khan’s powerful tenor, acquire a strangely subversive quality when female actors robustly join in with considerable brio. This is especially true of the Sufi number, “Oh Disdi Kulli Yaar di Ghareya,” in which Avantika Ganguly (as Sohni) commandeers the interludes and turns on its head the usual trope of such spiritual ballads in which a man (usually Amir Khusrau) presents himself as feminine energy that must be subsumed by a divinity that is characterised as masculine.

Then there is the beautifully plaintive ballad, “Buriyaan Buriyaan” (performed alternately by Mansi Multani and Neha Singh), which is an exercise in self-flagellation by Heer, as she berates her lovers for yearning a woman as tainted as she is. Yet, it acquires a progressive bittersweet edge because it comes right after a latter-day Mirza-Sahibaan rendition (scripted by Naresh), in which Sahibaan has survived a “honor” killing and calls for the ill-fated Mirzas of this world to be similarly shored up.

Music through the ages

The cyclical patterns imposed by patriarchy on the lives of performing women is a thematic preoccupation of Mahesh Dattani’s Gauhar, based on the chequered life of Gauhar Jaan, among India’s earliest recording artistes. To underline this, director Lillete Dubey casts classical vocalist Zila Khan both as Gauhar’s mother (Badi Malka Jaan), and later, as Gauhar’s older self, who falls into a state of decrepitude almost foretold by the self-fulfilling prophecy her mother’s life is. Rajeshwari Sachdev plays the younger Gauhar as a woman whose desires and aspirations haven’t yet been quelled. It’s a study in contrast with Khan’s stentorian woman of firm resolve, who perfectly negotiates heavy-duty ballads, like Begum Akhtar’s sophisticated thumri “Kaisi Yeh Dhoom Machayi.” Khan’s performance is equal parts bombast and virtuosity, while a decorous Sachdev cannot always access Gauhar’s trademark earthiness. Yet, in the play’s final act, when its emotional core asserts itself more strongly, the younger and older selves of Gauhar create a genuine kinship, best experienced in the songs they flit in and out of, as if they were duets. This includes Gauhar’s thumri “Aaja Saanwariya Tohe Garwa Laga Loon,” and her much more upbeat dadra, “Aan Baan Jiya Mein Laagi,” at the end of which one almost expects the playful salutation, “My Name is Gauhar Jaan,” that was such a diverting feature of all her records.

An alternative history of India’s musical heritage in which the owners were once women is alluded to in Sunil Shanbag’s Stories in a Song*, which features compositions by Shubha Mudgal and Aneesh Pradhan. A fiery courtesan, played by the feisty Ketaki Thatte, includes the catchy song, “Chun Chun Ke Phool Lelo,” with a disguised nationalist message, in her program in order to surreptitiously participate in the freedom movement. Elsewhere, the qawaali, “Humne Teri Nazar Ke Ishare,” written by Begum Suroor, is elegantly rendered by Nishi Doshi who plays an ingénue being groomed for celluloid in a chapter taken from Qurratulain Hyder’s Urdu opus Chandni Begum.

Those were women who crashed and burned at the turn of the last century, but nonetheless were pioneers who inspired ensuing generations of female musicians and singers, who were able to escape similar denouements. Naresh’s new play, Bandish 20-20000Hz resurrects doyennes who may be past their prime, but still hold on to the vestiges of their musical legacies with unstinting pride. Classical vocalist Beni Bai (Nivedita Bhargava) and nautanki artist Champa Bai (Anubha Fatehpuria) meet backstage at a cultural event in which they are both to be felicitated for artistic longevity. The play’s irregular narrative does it no favors, but the music by Mudgal suffuses it with vintage cadences of an aching beauty.

Like in Gauhar and Umrao, once again the songs tend to flit between the singers’ older selves and their younger embodiment — Ipshita Chakraborty Singh standing in for both. While the singers combine well, Bhargava is the musical mainstay. Her output includes “Na Ja Re Balamva Na Ja,” from the collection of classical singer Naina Devi, and “Ja Kahiyo,” written by Bahadur Shah Zafar, for which Naresh executes a piquantly nostalgic throwback to the days when Beni Bai was a regular at All India Radio. This was before cultural sanitization elbowed out erstwhile courtesans like her from our airwaves. Given the play’s chronological liberties, the two doyennes could now well be nonagenarians, and the green room in which they are ostensibly stationed is more reminiscent of a waiting room in a traveler’s sarai, where perhaps old souls arrive waiting for deliverance. Once again, the cycle comes full circle.

*Disclaimer: the writer is part of Stories in a Song’s team of writers.