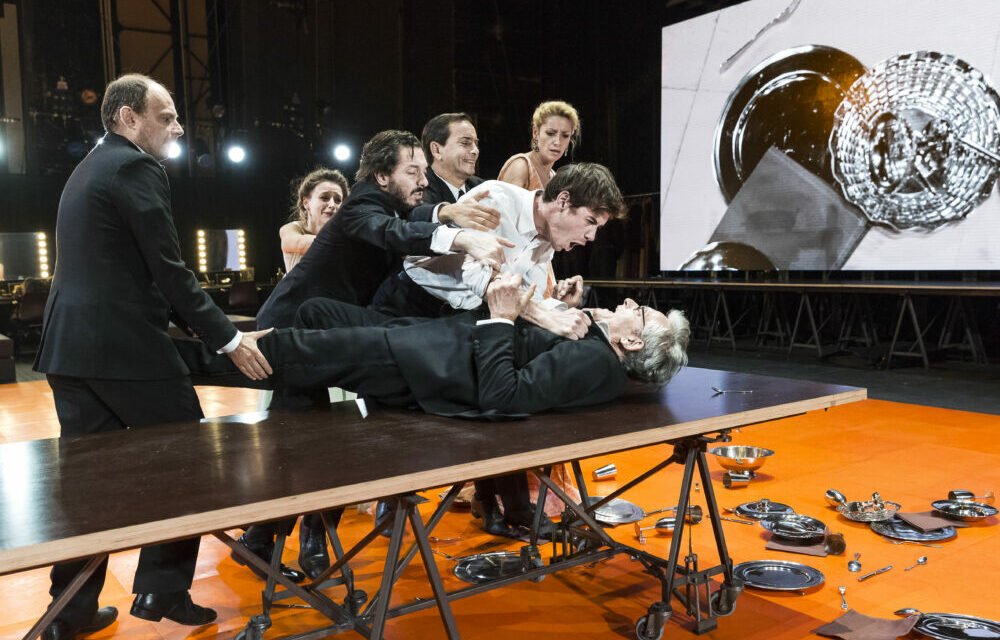 Ivo Van Hove directed the theatrical adaptation of Luchino Visconti’s 1969 Nazi-era film The Damned for La Comédie Française in 2016. The production opened at the Avignon festival less than a year after the Bataclan massacre in Paris. Since then we have witnessed a ubiquitous rise of the far right all around Europe and beyond. Visconti’s film, particularly in Van Hove’s careful theatrical rendition, has acquired a completely new significance for the early 21st century.

The synopsis of the original 256 minutes of the film is not so easy to summarise. Suffice it to say that the story concerns a semi-fictional family of German industrialists in the early years of Hitler’s Germany – more specifically the action starts on the night of the Reichstag fire on 27 February 1933 which was used by the Nazis to condemn the communists, and it encompasses the Night of the Long Knives in late June 1934, a massacre organised by Hitler to consolidate his power through exterminations of potential opponents. At the centre of the plot are the family’s internal struggles for power over the family steel business, which map out onto the larger political context – and vice versa – thus creating an intricate interplay between the microcosm and macrocosm to offer a contemplation of political power of Shakespearean dimensions.

I would advise seeing the film beforehand, where possible, if being able to follow the plot is important to you. The wide angle of the stage – despite being complemented by some live camera close ups (mixed in with archive footage in Tal Yarden’s video design) – makes it difficult to get close to the characters and keep track of their various individual overt and covert motivations. The most distinct characters are the Lady Macbeth-like widow Sophie von Essenbeck (Elsa Lepoivre) and her debauched, depraved and love-deprived son Martin (Cristophe Montenez). Visconti’s Martin, played by Oscar nominee Helmut Berger, could be seen as an aesthetic prototype for a 1970s trend exploring the sexual undertones of the Nazi era (the so called Nazisploitation), as seen in the films Cabaret and The Night Porter.  In Van Hove’s 21st century production, Martin’s portrayal is necessarily less seductive, more sinister and ultimately horror-inducing. Similarly the Night of the Long Knives, conceived by Visconti as a chaotic, beer-drinking, homosexual orgy which turns into a bloodbath, is here presented as more of a clinically-accomplished technical feat of stagecraft showcasing Van Hove’s by now typical ingenuity for conjuring up convincing crowd scenes through limited means. This surgical precision also serves to heighten the affective response, however.

Shown on the Barbican stage, Van Hove’s The Damned inevitably recalls the guest appearances of his other two shows exploring political power – The Roman Tragedies shown here in 2010 and The Kings of War in 2016. Jan Versyweyveld’s set for The Damned, envisaged as an installation on the theme of ritual-specific spaces, at the first glance has the modularity of the Roman Tragedies’ set. Additionally, Van Hove’s characteristic use of live video-feed of the backstage roaming cameras, previously seen in London in the Kings of War and All About Eve, is here taken to a new extreme, as it proceeds to follow, much to the audience’s amusement, one of the character’s search for another around the Barbican’s communal areas.

Van Hove’s production is musically considered too as Eric Sleichim’s score combines carefully selected influences from Schütz, Bach and Rammstein, featuring also at one point a live operatic interlude. The cumulative effect of the creative team effort and the enduringly captivating thirty-strong cast is clearly indicative of a notably ambitious, important and polished undertaking, well worth the audience’s 140 minutes without an interval and with subtitles. Combining gripping spectacle with attention to detail, the epic, political and the lyrical, Van Hove’s production offers much to marvel at both aesthetically and intellectually, even if aspects of the plot remain too intricate to get into immediately.