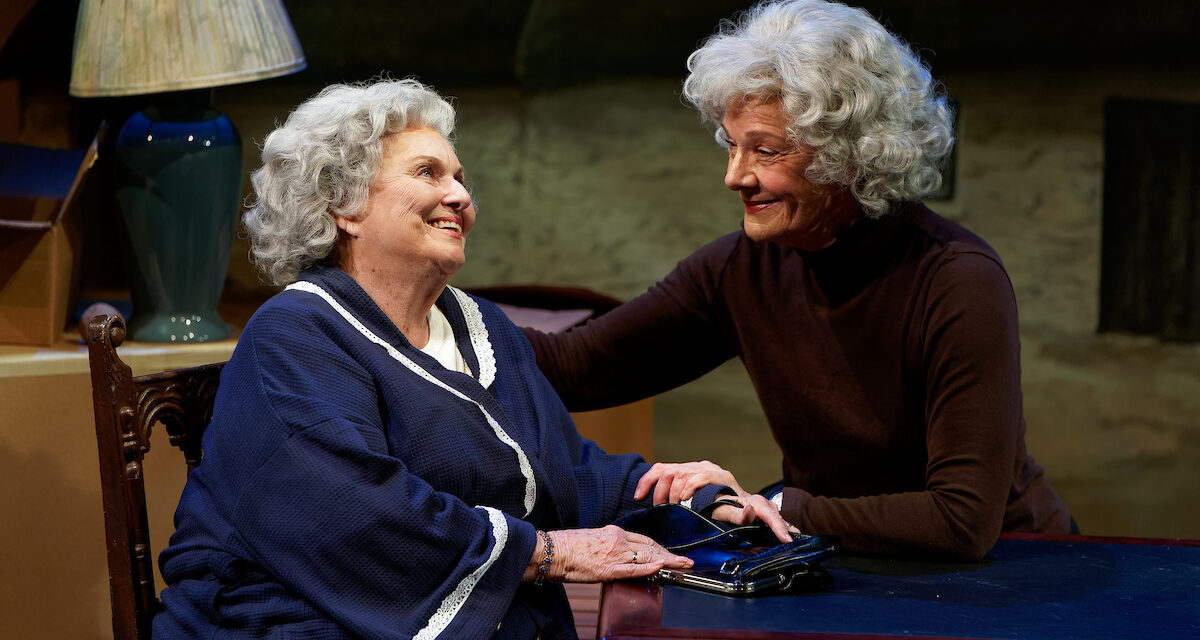 Since 2005, the St. Louis company Upstream Theater has been providing a space for international plays to be seen by local audiences. And, as their latest production, Salt, Root, and Roe by Tim Price shows, the American audiences to which they introduce plays is not limited to St. Louis because Upstream Theatre co-produced the show with Houston’s Stages Repertory Theatre where the production played from October 4-20, 2019. The production in both cities was directed by the Artistic Director of Stages Repertory Theatre, Kenn McLaughlin. A Welsh play, in its U.S. Premiere, Salt, Root, and Roe is a multilingual script that pushes against the rigid confines of any particular theatrical style. I saw the production in St. Louis, and that will be the focus of this article.

An impressive aspect of this collaboration is that, in a play about roots, three artists with disparate backgrounds came together to find commonality through the art. Philip Boehm, the Artistic Director of Upstream Theatre, studied at the State Academy of Theater in Poland and his work as a director in the U.S. and Europe was part of what led to his founding Upstream Theater with its goal to bring plays from around the globe to St. Louis. In fact, since 2005, two-thirds of Upstream Theater’s productions have been U.S. Premieres. Upstream Theater’s Managing Director, Peter Mayer, connected to Salt, Root, and Roe through his family’s Welsh roots, finding the words of play touching childhood memories. Finally, Kenn McLaughlin, the director of the production and Artistic Director of Stages Repertory Theatre found another way into Tim Price’s script: his ambivalent connection to his Irish roots mirrors the uncertainty the protagonist of the play feels towards her Welsh traditions. All these artists came together through the common creation of this production of Salt, Root, and Roe.

The script of Salt, Root, and Roe was first produced in November 2011, at Donmar Warehouse at Trafalgar Studio, London. The London production’s director, Hamish Pirie, is credited by Price in the published version for having the faith in the script that brought it to life. In a 2017 interview in The Stage, Pirie says of Price’s work, “He loves playing with the idea of what theatre is, and why you tell a story… I’m drawn to those kinds of plays, being messy, odd and weird.” Salt, Root, and Roe is all of those things: utilizing English and Welsh; focusing many scenes on games, and utilizing realism and a poetic abstraction juxtaposed together.

Salt, Root, and Roe centers on two elderly twins, Iola and Anest, who have entered into a suicide pact and the plight of Anest’s daughter, Menna, who returns to her small, seaside town, and attempts to thwart her mother and aunt’s plan. Thrown into the mix is the town constable Gareth who has problems of his own at home and seeks solace with Menna. As the play continues, Menna realizes Iola has serious dementia and that her and Anest’s lives are so diminished that it is time for them to move on.

Some of the scenes are movingly written realism, and the slow drip of secrets that each of them holds keeps the audience leaning in. Many of the scenes center on games: a childhood board game, in the beginning, keeps the audience on the edge of its seat trying to understand why a police officer is talking to Menna; Menna and her aunt with dementia deal truths to one another over cards; and Menna attempts to revitalize her elders with a game of hopscotch on the beach. These moments and others help to show how the literal games we play try to keep us from straight talk, but ultimately help us communicate. 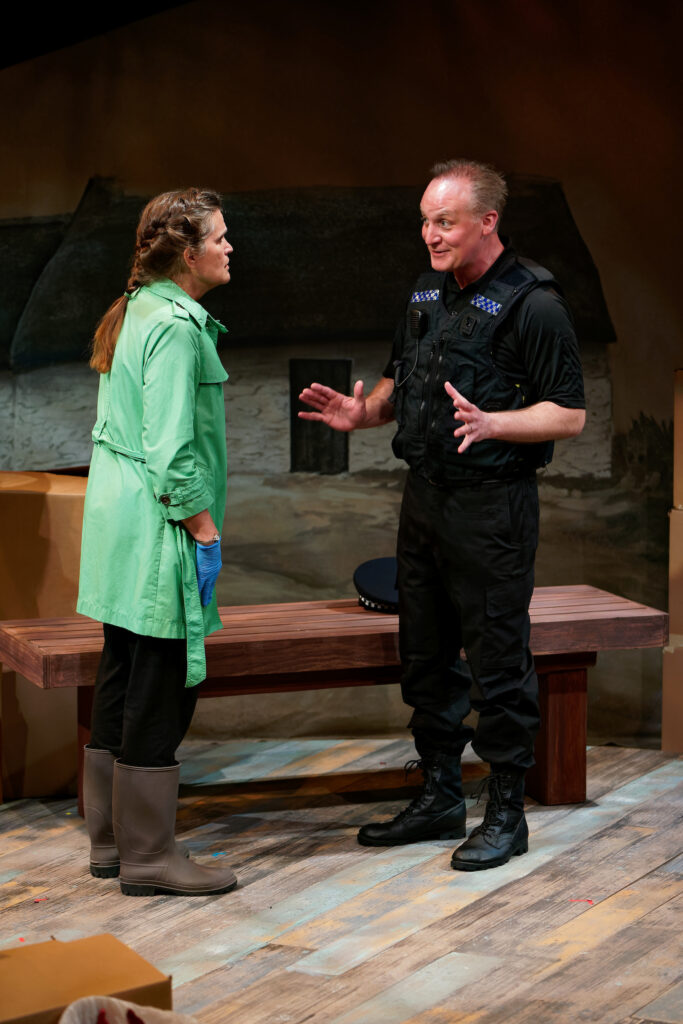 Throughout the play there are magical moments when Ioala and Anest provide the mythical direct address, mixing Welsh folk tales with stories of their own lives. These moments that appear outside the narrative of the play culminate in the play’s ending when the women walk into the sea, tied together, with rocks in their pockets, comforted by stories such as their father being a merman.

The script is unusual for its focus on mature women, and both Bonna Weinsting as Iola and Sally Edmundson as Anest found every moment of characterization given them. Weinsting played Ioala as desperately confused in her moments of illness, and Edmundson showed Anest as long-suffering but resilient as a rock against which the waves of Iola’s illness pounds. Likewise, Amy Loui as Menna brought tears to the audience at the end of her journey saying goodbye to her mother and aunt. Loui and Eric Dean White, who played Gareth, adroitly created a couple that one simultaneously hoped would get together and knew they needed to stay apart. Finally, Weinsting and Edmundson were haunting in swirling sea light telling the Welsh stories of their childhoods. 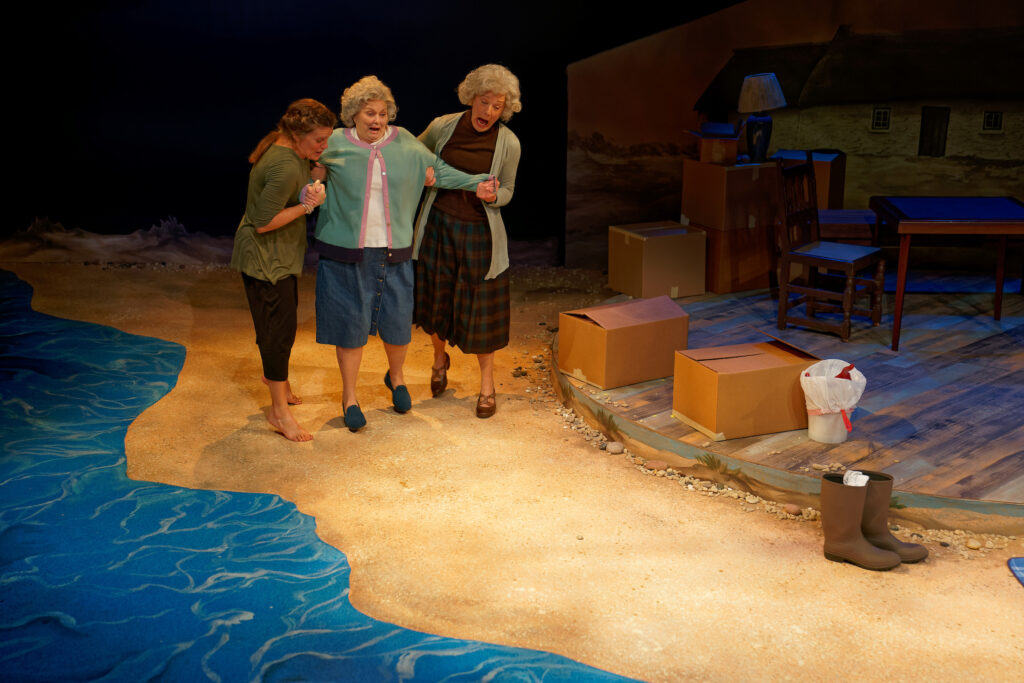 That lighting by Steve Carmichael combined with the set by Michael Heil made the moments of direct address by Weinsting and Edmundson particularly effective. On a slightly raised, circular platform placed in the upstage left corner of the stage was a fairly realistic portrayal of a rural home sans walls. All along the borders of this platform were stones of varying shapes, from pebbles to fist-sized. The upstage wall was a painted mural of the land meets the sea. Likewise, the floor was painted in yellow sand tones directly in front of the platform then shifting to ocean blues. During the scenes on the platform, the lights reflected the realism of that portion of the stage. When Ioala and Anest spoke in Welsh mythology that reflected their family history, they stood on the painted ocean basked in blue swirling light. This set audiences up for the final scene in which the realism of the land met the mythology of the sea. 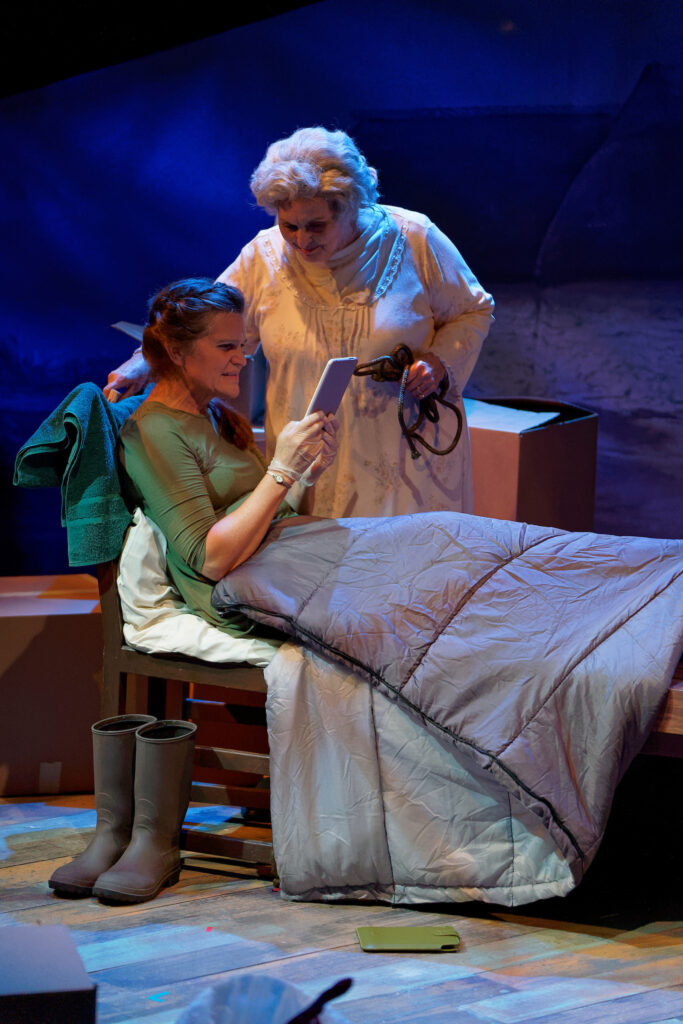 McLaughlin’s direction effectively kept these two worlds apart, lending the final scene its power. During the scenes of realism, simple moments like a character actually breaking a cup or songs being sung in Welsh created a vibrant world. But when Ioala and Anest spoke from the sea, the abstract world was equally effervescent. The question set up in the audience’s mind by this lovely bifurcation was: How do these worlds relate? And, in the final scene, McLaughlin, along with the designers and actors, answered that question with particular pathos.

Another aspect of the St. Louis production was its location, the Kranzberg Arts Center. A member of the Global Cultural Districts Network, the Kranzberg Arts Center is one of several venues in the Grand Center Arts District, which consists of theatre and music venues, gallery spaces, museums, radio stations, and office space for arts organizations. This central hub for the arts in St. Louis was created in the early 2000s through the philanthropy of the Kranzberg family and is now a vital aspect of theatre companies such as Upstream Theatre and its mission to bring international theatre to St. Louis. This partnership between the non-profit Kranzberg Arts Foundation, Upstream Theatre, Stages Repertory Theatre led to an international art event. As Upstream’s artistic director, Philip Boehm writes in the Salt, Root, and Roe program, “Our common goal is to develop a creative network with other theaters in the region, expanding connections and amplifying opportunities for artists.” This co-production was certainly successful in those goals.