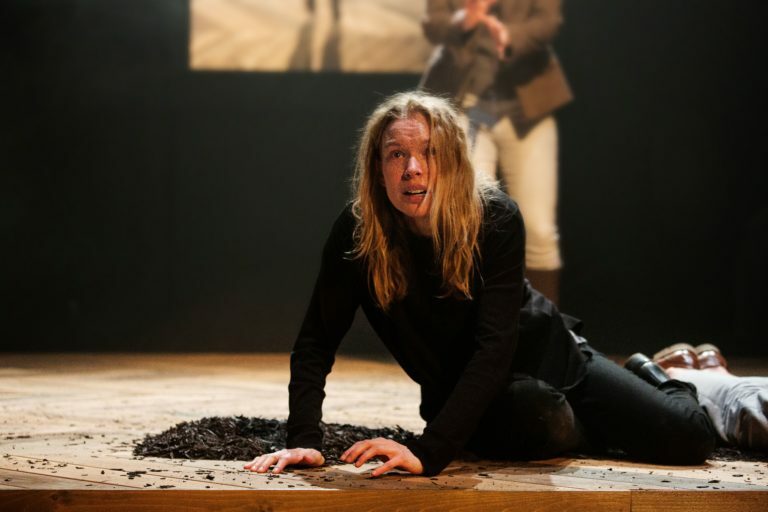 Just when you thought no one could possibly find a fresh interpretation of Hamlet, along come adapter/director Ravi Jain and his Why Not Theatre company out of Toronto. Not exactly risk-averse, they’ve sliced and diced the old warhorse, integrated a gender-bending and cross-cultural slant, erected three huge mirrors as part of the set, and made Horatio–played in American Sign Language by the remarkable deaf actor Dawn Jani Birley–the play’s narrator.

The result: Prince Hamlet, as Jain has dubbed it, is a theatrical whirlwind and the best show thus far in an already strong National Arts Centre English Theatre season.

Jain’s is an exceedingly dark vision of an already dark story. Interspersed with shots of hilarity—the gravedigger scene, with Miriam Fernandes as the puckish gravedigger, is golden — Prince Hamlet is a deep dive into times, and people, severely out of joint (those mirrors reflect a lot of stuff, including our own troubled age).

Hamlet’s feigned madness—although Christine Horne’s magnetic depiction of the man leaves considerable doubt as to where sanity and insanity diverge–is a cipher for the madness that has gripped a rank, disintegrating state presided over by a satyr-like King Claudius (Rick Roberts) and his randy, wilfully oblivious queen, Gertrude (Karen Robinson).

That madness trickles all the way down to poor Ophelia (Jeff Ho), a sweet and vulnerable victim of the cascading derangement in Denmark. Ophelia’s drowning is related by Horatio, Birley’s balletic signing of Ophelia’s death a kind of eulogy for one whose life was silenced by an unwitting, obsessed Hamlet and a world beyond her, and his, control.

Here, as elsewhere, making Birley part of the story rather than standing off to one side of the stage as ASL interpreters usually do brings a startling new corporeality to Shakespeare’s already vigorous language.

Sometimes Birley, whose Horatio is an observer and someone with skin in the game, is signing what others are saying while also reacting to their words. Sometimes she’s interacting with others who are speaking or, on occasion, themselves signing in silence or while speaking. As an audience member, I found these interchanges soon lost their strangeness, becoming one more vehicle for Jain to realize his vision of inclusiveness and his take on Shakespeare’s universality.

Like his introduction of gender-bending and cross-cultural elements, the signing fractures the traditional Hamlet – appropriate to a play about a fractured man and kingdom–and then gives Jain the opportunity to reconstruct it in his own way.

Incorporating Birley and signing also focuses our attention on one of Jain’s, and the play’s, great concerns: the simultaneous power and limits of language. If the rest is silence, how can we ever know our own and others’ hearts?

That concern courses through Horne’s interpretation of Hamlet himself. Dressed in a shapeless black costume, hair lank, this Hamlet’s careless outward appearance tells us little of what’s inside other than a dishevelment of spirit and mind. His soliloquies, delivered by Horne in consistently compelling fashion, do the same, eloquently spelling out the quandaries of life while acknowledging that there are things beyond the bourne that we can neither grasp nor articulate.

At the other end of the language spectrum is Polonius. Windbag that he is, Polonius stands in sharp counterpoint to Hamlet, although Barbara Gordon brings a redeeming affection for his children, Ophelia, and Laertes (Khadijah Roberts-Abdullah), to her portrayal of the old fellow.

Through all this, and his occasional over-indulgence in theatricality, Jain manages not to lose sight of the fact that Hamlet is a helluva good story, a high-end thriller with a well-known trajectory that, when well told, always grips anew.

Just as importantly, Jain brings the deep humanity of all the characters to the fore. Whether it’s Laertes in anguish at his sister’s death or the abiding camaraderie between Hamlet and Rosencrantz (Fernandes, again) and Guildenstern (Hannah Miller, also in multiple roles), these are all people we care about because we recognize them, either in ourselves or in others.

Set and costume designer Lorenzo Savoini has put these characters and their story on a simple, herringboned wood platform, with those three large mirrors behind and pointed at the audience. The story is lit in sometimes too-intense fashion by André du Toit, and Thomas Ryder Payne has created a rumbling, ominous soundscape.

We’ve seen diverse Hamlets in Ottawa in the past few years, including a strong if more conventional, plot-driven version by the St. Lawrence Shakespeare Festival in 2013 and Raoul Bhaneja’s one-man Hamlet (solo) the same year. Prince Hamlet is a richly rewarding addition to that production history.

This article was originally published in Capital Critics Circle on March 2, 2019, and has been republished with permission.