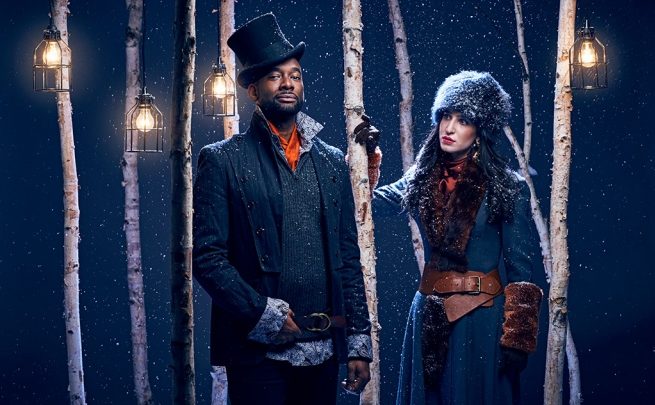 First of all, do not read Pushkin’s Onegin before seeing The Musical Stage Company and NAC English Theatre’s Onegin in Ottawa. Although the show is apparently set in Russia, it includes the main characters in the novel, it moves from Saint Petersburg to Moscow and back and there are references to Byron which one finds in Pushkin’s text. However, a knowledge of this early 19th-century romantic novel which has become one of the great works of Russian literature will only confuse you. Just arrive at the NAC with no great expectations, think of what we are told that this is not an opera, relax, forget the ballet, and you will probably enjoy this very much because it is clearly geared for a 21st century sensibility where existing operatic, theatrical, pop usic, and musical theatre conventions have all been thrown to the wind.

My feeling? The show, although it takes on the form of a rock concert, appears to follow Tchaikovsky’s libretto of Onegin, because this performance highlights the most important moments of the story and thus becomes a  19thcentury melodrama moving forward rapidly: the tragedy of a young country girl who falls in love with a brooding, self-centered iconic figure of the Romantic period, struck by the writings of Lord Byron and  “l’ennui,” the favorite illness of  European literature of that period.  This one is produced by the Musical Stage Company from Toronto, accompanied by three onstage members of a rock group on keyboards, cello, percussion, and guitar, who become a fascinating performance unto themselves. The highly talented keyboard artist Chris Tsujiuchi pounds the piano to death, percussionist Barry Mirochnick and cellist Erika Nielson liberate powerful energy on the bass sounds that vibrate throughout the theatre but they often cut into the more delicately lyrical moments, creating much emotion but interrupting the rare bits of intimate feeling that spiral off the stage. This show was definitely an attempt to move musical theatre far, far outside the box.

There were moments that worked well. The confrontation between Onegin (Daren Herbert) and Lensky (Josh Epstein) when Onegin, after flirting with Lensky’s fiancé Olga, is finally challenged to a duel. Lensky’s aria when he says goodbye to Olga showed how  Epstein’s voice and movement were among the most important forces of the show. Also well staged was the early morning duel which had Onegin collapsing with sorrow at the end.

In general the structure of the second part, which was already in Tchaikovsky’s libretto where the exchange of letters and opposing reactions (Tatyana’s letter as opposed to Onegin’s letter) recreated the counter effect of the first part of the show. That reversal of exchanges produced a solid dramaturgical turn and gave much weight to the final meeting between Onegin and Tatyana even though parts of the audience did manage to howl with laughter for reasons I couldn’t fathom. They must have wanted to emphasize the sense of provocation that this show could represent in its new esthetic of counter conventional adaptation.

However, even when we were told about the passion of the whole production (an interview on YouTube made that point), that is what was missing to my mind. I felt no passion; I had no particular emotional feeling for this show in spite of the great soaring sense of sadness that should have resulted from that horrible moment when Onegin reacts to Tatyana’s letter that she sends him soon after their meeting. The story was full of sweeping emotions, of unbearable tension, of sadness, of excitement but none of that came over. What happened?

One problem was the way Onegin (Daren A, Herbert) never managed to bring across his brutal philandering man of the world character. His rock music voice was perhaps not suited to the great sweeping highly theatrical emotions that should have bowled us over. It was also partly due to the fact that his singing was overwhelmed by Hailey Gillis, as Tatyana, whose voice has a tragic and lyrical quality that brought out those extraordinary emotions! (“Let me Die”). In her case, the vocal performance and the stage character complemented each other. But because Onegin was the focal point of all the energy of this performance, the emotional weakness of his singing (all the dialogue was sung by the way) was even more obvious. But his was not the only one. The scene where Onegin was supposed to be seducing Olga, his friend’s fiancé, just to annoy Lensky for bringing him to this boring party, fell terribly flat. Why?  Because even though Olga (Elena Juatco) danced like a giddy young girl, she did not carry her performance any further than that and so nothing vibrated between her and Onegin. As a result, the couple who was in the process of destroying both Tatyana and Lensky and setting up a tragedy just disintegrated.

The most exciting moments were created by Josh Epstein as the poet Lensky, who apparently has been with the show since its creation in Vancouver. He has a marvelously powerful and highly dramatic voice which came out in his aria with Olga just before the duel.  He moves like a dancer and his corporeal fluidity helped unite the contemporary feeling of the rock music choreography with the universal emotions of anger and jealousy that were at the source of his character and ultimately lead him to his death. He fused both period sensibilities just as Shane Carty (the Prince Gremin) managed to do with his magnificent voice.

The Linda Garneau’s choreography which worked so well in Tremblay’s Belles-Sours: the Musical, seemed to bring out much of Tchaikovsky’s interest in folk dancing that one finds in his ballets (Swan Lake was created one year after Onegin) but the dancing appeared rather watered down, diluted with bits of Paso double, and flamenco, American hoedown, line dancing. It thrilled the spectators who wanted to have fun, and this was funnyish, but it almost seemed an extension of the theatrical games that they played by having the actors move into the audience, pass the letters around in a playful way, drop out of character and chat with people they meet on the way towards the stage, before moving on. Thus a good part of the show was all about breaking the theatrical illusion but then what is left for the passion, and emotion within the play and between the characters which has to depend on an illusion created by the performance!  Far from it. It’s romantic love story where a cad destroys a young country girl and gets it in the end and the fun and games contradict all that. We know that shows which break the barriers between audience and performers have an important performance history but those techniques usually have a theatrical reason to exist, not just a need to titillate the audience. In Onegin, it was a protest, a way of breaking down all the Onegins preceding this one. And a way of bringing the younger crowd into the theatre! And then why not? Tickets have to be sold.

Onegin plays in the Theatre at the NAC from September 13 to 30. 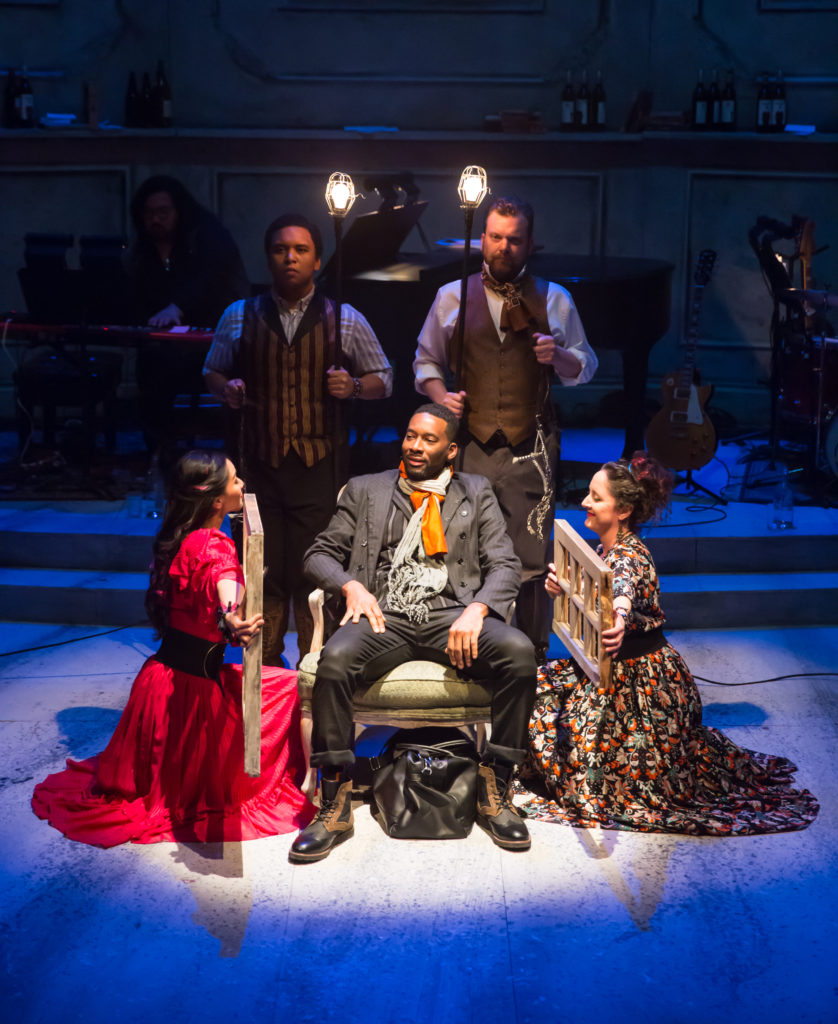 This article was originally published on Capital Critics’ Circle. Reposted with permission. Read the original article.