French-Canadian actor Yves Jacques in Robert Lepage’s "The Far Side of the Moon". Toni Wilkinson

In The Far Side of the Moon, Philippe and Andre, two estranged brothers, deal with the aftermath of their mother’s death. Written, directed, and designed by French-Canadian artist Robert Lepage, with music by Laurie Anderson among others, the show has been periodically on tour since its 2000 premiere in Quebec City. All roles have been performed by either Lepage or by the French-Canadian actor, Yves Jacques. On this current tour, it is performed by Jacques who gives a strong physical performance.

Philippe, who the performance mainly focuses on, is an occasional teacher, a part-time telemarketer, and a long-term Ph.D. student. He is shy, unsure of himself, and intensely curious, primarily about the cosmos and the possibility of extra-terrestrial life. His younger brother Andre, a meteorologist and television weather presenter, is brash, self-confident and views life in a cut and dried way.

The major theme is that of reconciliation – principally between the two brothers but also between nation-states and opposing political philosophies. This clash of oppositions is echoed in the rivalry between countries – in this instance, the space race from the 1950s onwards between capitalist America and Soviet Russia. Philippe’s Ph.D. thesis, which he is constantly formally defending without success, argues that the space race was driven more by narcissism than curiosity.

The narrative features the temporary reconciliation between these cold war rivals, which was achieved with the 1975 joint Apollo-Soyuz mission. This resulted in a meeting in space between American and Russian cosmonauts: one of whom was Alexei Leonov, who carried out the first spacewalk in 1965. This spacewalk holds a special meaning for Philippe and is a recurring motif in the performance. Leonov makes frequent appearances as a diminutive puppet figure in a cosmonaut spacesuit operated by the puppeteer Éric Leblanc. 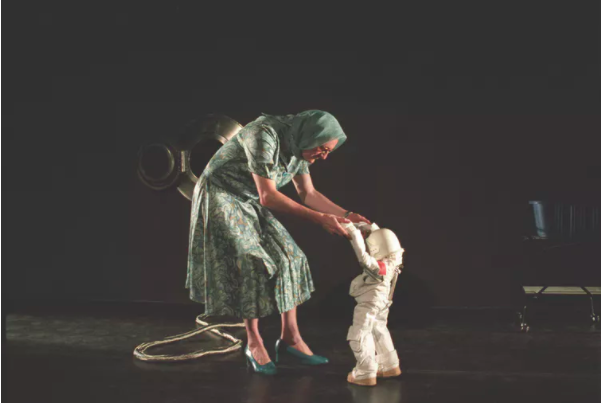 Audiences familiar with Lepage’s works, such as former Perth festival offerings The Seven Streams of the River Ota (1998) and The Dragon’s Trilogy (2006), will recognize the design style of Lepage’s Quebec-based company, Ex Machina. Formed in 1994 by Lepage and his collaborators, it merges traditional theatre practices with multimedia technologies such as film and video.

The set is a classic Lepage-designed construction with a rotating ceiling/backdrop that incorporates a stage-wide mirror surface. This is used in several scenes, often to great effect. Initially, it reflects the audience back at itself as Philippe delivers what might be a lecture on his thesis topic. At one point a large, almost deserted bar space is suggested, with a lonely and drunken Philippe arguing with an unseen barman, his responses suggested by Philippe’s retorts.

The mirror is especially effective towards the end when Philippe, lying on the floor but looking like he is seen from above, is sitting on a chair on the bank of a river in Moscow. There is a sense that he may be contemplating suicide. He then begins his own spacewalk, a floor-bound dance to Beethoven’s Moonlight Sonata.

But Lepage also uses simple small-scale effects, such as the drink containers that Philippe fashions into a three-stage rocket, with a salt cellar forming the capsule at the top. Props and sets can have multiple uses. A circular glass door can serve as a washing machine, an aircraft window, a space capsule door, and a fish tank among other uses. It also has a pivotal role as a clock at various times. An ironing board can become many things – such as gym equipment, a moped, and with a wash basket on top – a pram. 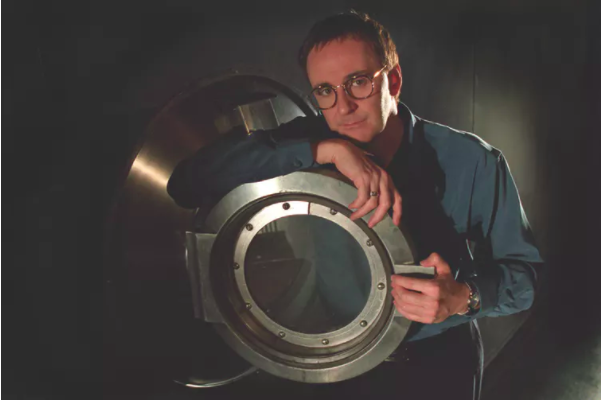 A circular glass door can serve as a washing machine, an aircraft window or a space capsule door. Toni Wilkinson

The title of the show reflects Philippe’s wish to carry out the dreams of his hero, the Russian scientist Konstantin Tsiolkovsky who in 1895 suggested the construction of a space elevator. For Philippe, this would be an impossible project on earth where the force of gravity would defeat its construction. However, it could be built on the “far side of the moon”, looking out towards the mysteries of the cosmos and out of sight of the mess and chaos of life on earth. It is also important for Philippe that the moon, as he states at one point, is more than an object for international rivalry – it inspires poetry and music.

In the end, Lepage withdraws from making a statement of finality. The show ends on an upbeat note, with Philippe’s video entry recording his mundane life being selected as part of a project showing life on earth. This is to be beamed into outer space in search of alien life forms.

There is also the hope of reconciliation, signified during the performance in a video clip of the 1975 Apollo-Soyuz rendezvous. And at the end, there is an invitation to a restaurant meal from Andre when he speaks to Philippe in Moscow. But nothing is finally resolved because Lepage is wise enough to know that life is not like that.

The Far Side of the Moon is an entertaining and thought-provoking installment in a quarter century of festival touring by Lepage and Ex Machina. It is intellectually engaging, frequently funny, and Jacques performs his roles with an excellent sense of comic timing, emotional depth, and physical presence.

The Far Side of the Moon was at the Adelaide Festival center from 2 – 7 March.

This post originally appeared on The Conversation on February 26, 2018, and has been reposted with permission.