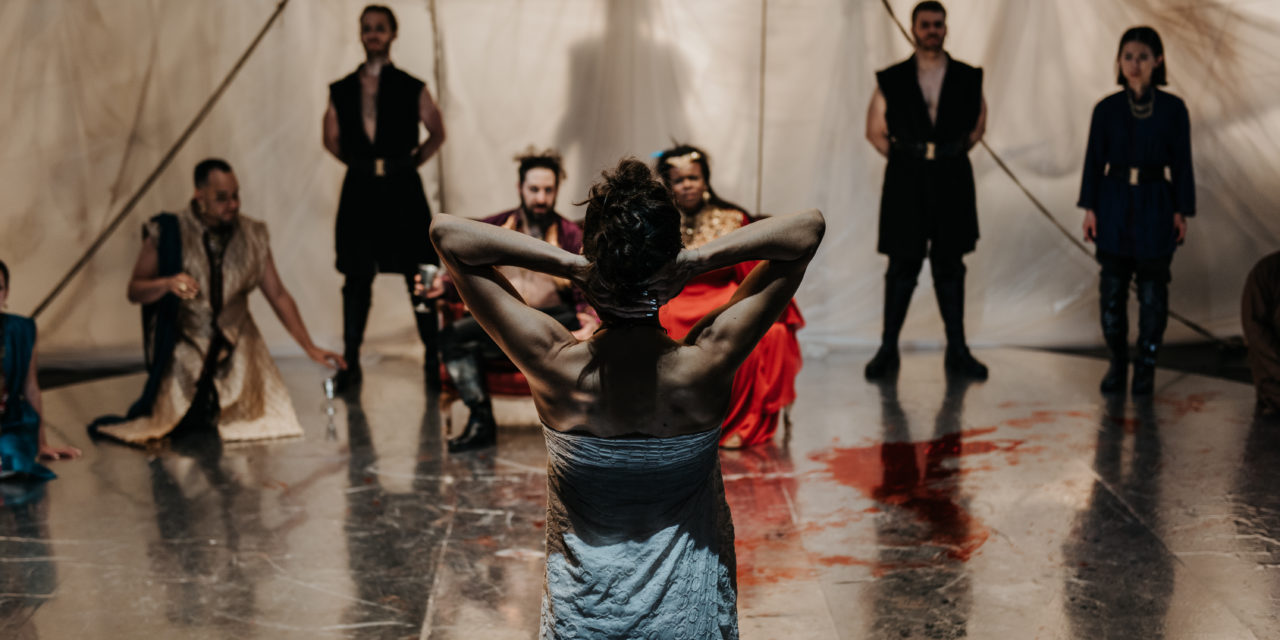 M-34 Productions and FringeNYC present a dazzling new production of Salome at the Irondale Center in Brooklyn’s Fort Greene neighborhood.

Oscar Wilde’s play, originally written in French, first premiered in France while the author was imprisoned in that country. M-34’s production features a new translation by director James Rutherford, whose work is simply remarkable. The audience enters the Irondale’s sprawling upstairs auditorium to the sight of actors splayed onstage in resting positions, all dark costumes against an upstage wall shrouded in white gossamer fabric.

The action soon commences with the entrance of a figure carrying a lamp facing downward, the stage’s main source of illumination for this opening scene. Among the evening’s chief delights is the deployment of such inventive lighting sources, not the least of all being the spellbinding centerpiece of the evening, Salome’s justly legendary dance, featuring rock concert-like video projections. It is such attention to transportive detail with which Rutherford threatens to make a major mark on the New York theater scene.

The evocative, moody staging of the top of the evening, from the sinuous scenic design to the draping costumes to the slinky lighting all conspire to create a sensual mood that is the night’s most memorable emotion until the aforementioned dance later in the play. That the play then opens up to accommodate up to 20 actors and an attendant burst of lighting offers a stark contrast that can’t quite justify either the abundance of bodies onstage nor the flat lighting. Sometimes less is more.

That quibble aside, the acting is consistently strong, with Salome, Herod Antipas, and Iokanaan as standouts. Lisa Tharps, as Herodias is a gifted actor who is ultimately miscast; her strength is evident yet her character lacks a vulnerability that would render her trajectory more poignant. Her husband Herod is played with a whimsical touch by Marty Keiser yet his interpretation works as a more effective counterpoint within the overall classical context of the production.

Laura Butler Rivera’s Salome is a lithe, wraithlike presence whose stature bursts the moment she first speaks. She’s clearly a seasoned dancer yet nothing that precedes her solo is adequate preparation for her gauntlet-throwing dance. The cumulative impact of her fluid movement, the dark, ominous lighting, and the surrealistic video projections are a welcome centerpiece of the evening. It’s impossible to take your eyes off her, rendering an estimate of the duration of her terpsichorean interlude impossible.

Feathers Wise as Iokanaan is a marvelously androgynous presence whose stature helps render this central character a memorable figure, despite the fact that much of the character’s action is played behind the white upstage fabric wall. With impossible cheekbones and lanky dark hair, Wise resembles a young David Johansen, one-time lead singer of protopunk band the New York Dolls. One secretly wishes for more stage time for this marvelous actor.

Despite the occasional discontinuity in acting styles and the anticlimactic effect of the brightly lit scenes contrasting with the moody, more transportive early scenes, Rutherford’s Salome effectively and memorably captures the ominous mystery of Wilde’s infrequently-produced play. It’s no surprise that Rutherford would be inspired by this wonderful text. Without a thorough examination of the original translation, it’s challenging to adequately credit this new version. Suffice to say that there are no glaringly modern passages in an evening where the language is liquid and rendered with finesse by the talented cast.

Credit is due to a creative team whose work evokes that seen on bigger stages, most notably the recent production of The Damned by Ivo van Hove at Manhattan’s Armory over the summer. Kate McGee’s atmospheric lighting design dovetails nicely with Lara de Bruijn’s sculptural costume design. There’s also the matter of Oona Curley’s inventive scenic design, Jess Goldschmidt’s mesmerizing choreography, and Michael Costagliola’s nuanced, evocative sound and score. Rutherford would be wise to consider utilizing the immense resource of talent this creative team has in abundance as consistent collaborators.

While the anti-Semitism inherent in Wilde’s script is regrettable it is contextual and not overly distracting or distressing. One possible antidote to such politically incorrect writing might be to portray the offenders as ignorant and pitiable, the better to dull the blade of offense inherent in an otherwise worthy script.

Salome is at the Irondale Center, 85 South Oxford Street in Brooklyn, New York 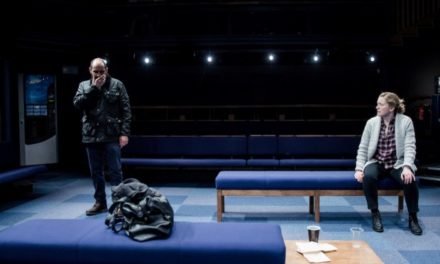 “Poison” at The Orange Tree Theatre