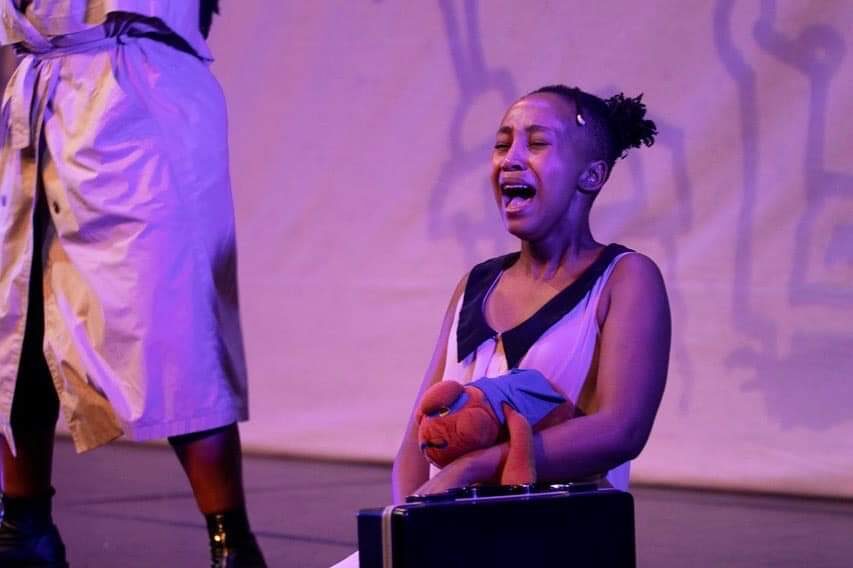 Kwasha! Theatre Company’s Peeling Shadows, which has just ended a limited run at the Market Theatre, is one of those productions that utilize so many unconventional theatrical elements, leaving one amazed at just how they were able to put it all together and make it all work!

Whilst, on the one part, it is a production that relies on the story as all good productions do, the use of various theatrical elements such as those from shadow theatre, where the actors are behind a curtain and projected by light adds another layer to an already engaging narrative.

Furthermore, the use of slides to represent space and be the map through which the actors move from one space to another is something yet to be encountered in theatre productions, and it embellishes the texture of the story to stratospheric heights.

Peeling Shadows is a production that cannot be accused of being a run-on-the-mill “type theatre” which either relies too heavily on dialogue or action and Kwasha! Theatre Company has to be commended for how they refuse to be defined by what has come before them!

What makes it even more compelling and refreshing is that there is no overindulgence in any one element, and the multiplicity of theatrical elements utilized means that there is something for everyone, which is not always the case for local theatre productions.

With the protagonists being a little girl who is lost and a blundering detective added together with sputtering of odd characters who seem zombie-like and on some level presented as grotesque, this story is not just another crime mystery but also draws focus on things such as corruption and how society is in desperate need of some kind of redemption from the many challenges which it is confronted with.

The versality of the cast, both in how they execute taxing physical postures and still manage to play their characters, is something to be commended. When one looks at the production as a whole, there is no doubt Kwasha! Theatre Company is carving a path for a different kind of theatre, something desperately needed to bring audiences back to the theatre!

As a groundbreaking collaboration between Market Theatre Laboratory and Windybrow Arts Centre, the Kwasha! Theatre Company project proves that investing in young thespians to not only experiment but put up work is key to theatre’s continued relevance, as it will need to draw new audiences who are not straitjacketed by the old conventions which for so long have been the hallmark of theatre in South Africa.

Peeling Shadows, directed by Joel Leonard, and featuring Mosie Mamregane, Sboniso Thombeni, Wonder Ndlovu, Upile Bongco, Dintshitile Mashile, was produced in collaboration with the Market Theatre Laboratory and the Windybrow Arts Centre. It was on at the Market Theatre from October 30 to November 8, 2020.

This article was originally posted on theafricantheatremagazine.com on November 23, 2020, and has been reposted with permission. For the original article, click here.