“Lwów We Won’t Give Up.” Directed by Katarzyna Szyngiera.Wanda Siemaszkowa Theatre in Rzeszów. Photo by Maciej Rałowski.

Standing on the edge of a meadow and a forest, the spreading lime tree in the opening scene of the play is part of a quintessential idyllic landscape. Its photographic image is displayed on a large upstage screen. Against the backdrop or rather in the shade of the tree, the actors of the Rzeszów theatre are unwinding. Some of them are doing yoga, some are lying on the floor listening to the bird song, still, others are sipping fortified tea on one of the platforms. The people enjoying their ‘luncheon on the grass’ might just as well be a group of residents of a border town or village such as Beniowa, which straddles the River San dividing Poland from Ukraine. The identities of the actors and their characters are constantly blurring, which leads to an overlap of the opinions of the borderland dwellers and the actors, who voice their views on the tasks set by the director. For example, seeing themselves as open-minded, they rebel against playing the roles of chauvinist Poles.

The onstage platform, weaving like a river, marks the interstate border. On one side of it are Poles, on the other a Ukrainian woman, Oxana (a bravura performance by the extremely energetic Oxana Cherkashina), who wants to join the group of people relaxing under the lime tree, but cannot just go and cross the river. Once, Beniowa had a mixed population of Ukrainians and Poles who shared the shade of the famous 200-year-old tree. Now, with the post-war border running through the village, the only way to reach the Polish side is to cross over in Krościenko, but to do so, one needs to make a nearly 70-kilometer detour. Oxana points out this absurd fact, giving a detailed account of her trip to the border crossing, which she tries to reach without a car, relying on GPS and the kindness of the people she meets along the way. The citizens of both countries have to accept the arbitrary decisions of politicians, but animals can afford to ignore them, so Polish wasps fly to Ukraine, while Ukrainian bees cross over to Poland unmolested.

Not only does the story of a village torn asunder by history provoke reflection on state borders, which often cut brutally through people’s lives, but its memory triggers mutual prejudice. When Beniowa was split by war, and the German-Soviet demarcation line became the eastern border of Poland, the local Ukrainians were deported in a population exchange. When people were being displaced, the father’s nationality was decisive. Polish wives could return home, but in most cases, there was nothing to return to, as everything had already been looted. Politics separated families and punished those who were determined to stay together at any cost by taking away their jobs. The Poles left the village after it was burnt down by the Ukrainian Insurgent Army. The Ukrainians who stayed on and witnessed the so-called harvest operation took shelter on the other side of the river. Since then, a thriving multicultural town with a potash plant and gravel mill has turned into a wilderness on the Polish side, and there are only a few houses left in the Ukrainian part.

The sequence about the old mythical lime tree and the abandoned village in the Bieszczady Mountains is used by the writers, Katarzyna Szyngiera, Marcin Napiórkowski, and Mirosław Wlekły, as a prologue to a broader rumination on Polish‒Ukrainian relations. Although the ties between the two nations date back to the times of Bolesław the Brave, whose knights drove Yaroslav the Wise beyond the Bug River ‒ which the audience is reminded of through a historical reenactment ‒ the neighborly relations are strained. It seems easier for Ukrainians to cross the state border, even if it means queuing for several hours than to overcome the mental barriers that the Poles have set in their minds. Oxana is invited to Rzeszów to play ‘a real Ukrainian’. Nobody knows what that means. The actress pokes fun at her part, drawing on a number of stereotypes. She says that as she is a poor visitor from the East, she has no car, but she has brought some gifts instead: a bottle of Ukrainian cognac, fudge, and a folk scarf. What can she hope to get in return? Not much, since her compatriots in Poland are often mentioned in the same breath as low paid work, smuggling cheap cigarettes and buying meat in Biedronka discount stores. She is handed a script written in Polish.

The dilemma of Oxana, who would like to act in her own tongue with translations displayed on the teleprompter, ties in with unequal treatment of immigrants from behind the River Bug, the undisguised contempt they often face in Poland when they are denied the right to dignity. In her mocking song, the actress runs through a litany of Polish prejudices, styling herself as a ‘heroine of capitalist labor’ and ‘Bandera supporter’ who fled to Poland from a country at war to earn a living for her children. Despite her three degrees, she is classed as an illegal worker who tries her hand at various jobs: a raspberry collector, cleaner, maid, dishwasher, washerwoman, even a masseuse with some intimate services thrown in. Not only is she underemployed, but she has to exhibit good health and flexibility above and beyond the requirements of the Polish labor code, which usually means giving up days off and holiday breaks. Jokes about the ‘black’ Ukrainian palate do not fill Oxana with optimism, but she cheerfully observes that ‘as long as there are Muslims and gays in Poland, there is nothing to be afraid of’.

Before they started working on the script, Szyngier and Wlekły went to Lviv to shoot a reportage talking to Poles and Ukrainians about their mutual relations. The 1918 battle for Lwów (the former name of Lviv) was the starting point, but they were more interested in contemporary angles than historical events, and in the way in which the past, or actually its historical memory, impacts interpersonal relations at present. They held similar conversations in Rzeszów. Replies of passers-by, interviews with service staff, museum employees and historical reenactors, as well as questionnaires answered by secondary school students resulted in a patchwork of ideas and opinions, which are quoted by the actors or read from the screen. It seems that despite prejudices, Ukrainians have a more realistic attitude towards Poles: they respect them for the way they have developed their country which now offers significant opportunities, but make no bones about the fact that they aren’t treated well in Poland. Poles, on the other hand, are stuck in a bubble of resentment. They harp on about the Volhynia massacre and the loss of Lwów. They accuse Ukrainians of taking away their jobs. A strong case in point is a street poll shot in Rzeszów, where a doctor from Lviv while talking about his friends from Poland, is identified as a potential threat and verbally assaulted by a passer-by.

The documentary elements of the play alternate with fragments of fiction revealing the memorial strategies of Poles. The minister responsible for foreign policy would like to see Ukrainians in a folk entourage, dancing the hopak, infantile, ‘tame’. This vision of the past leaves no room for the perspective of the other side. To give just one example: Poles are also seen as former aggressors. It is worth noting that Szyngier’s and Wlekły’s previous production, Svarka, staged at the Polish Theatre in Bydgoszcz (2015), which probed mass murders in Volhynia in the final stages of World War II, was created in a similar fashion, at the clashing point of opinions from both sides of the border. Stepan Bandera, a controversial figure in Poland which is used to stigmatize the eastern neighbors, is a crucial element of the past in the Rzeszów production. To prove how harmful and untrue the image of the Ukrainian-the-Bandera-supporter is, Oxana gives Bandera, or rather a photo of him, to the Rzeszów audience, saying she will be happy to get rid of him, as he was a Polish citizen at the time.

Szyngiera’s piece touches upon various flashpoints in Polish‒Ukrainian relations, mostly stressing the scale of neglect and hypocritical mirages on the Polish side. ‘What kind of past does the future need?’ ‒ this question, which comes from a book by Polish historian Tomasz Stryjek, is left hanging in the air over the stage at the end of the performance. Politicians cannot be counted on at this point in time, but the efforts of civic organizations and social activists give hope for overcoming the existing barriers and limitations, which are often harder to move beyond than state borders.

Lwów We Won’t Give Up

This article was originally published in Polish by Didaskalia. Theater Journal 2019, no. 149. It was translated into English by Didaskalia for TheTheatreTimes.com and reposted with permission. 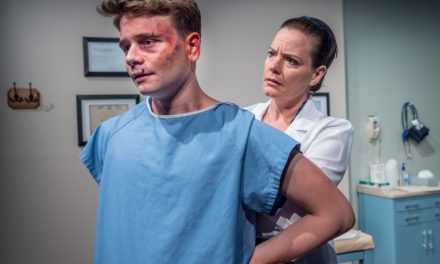