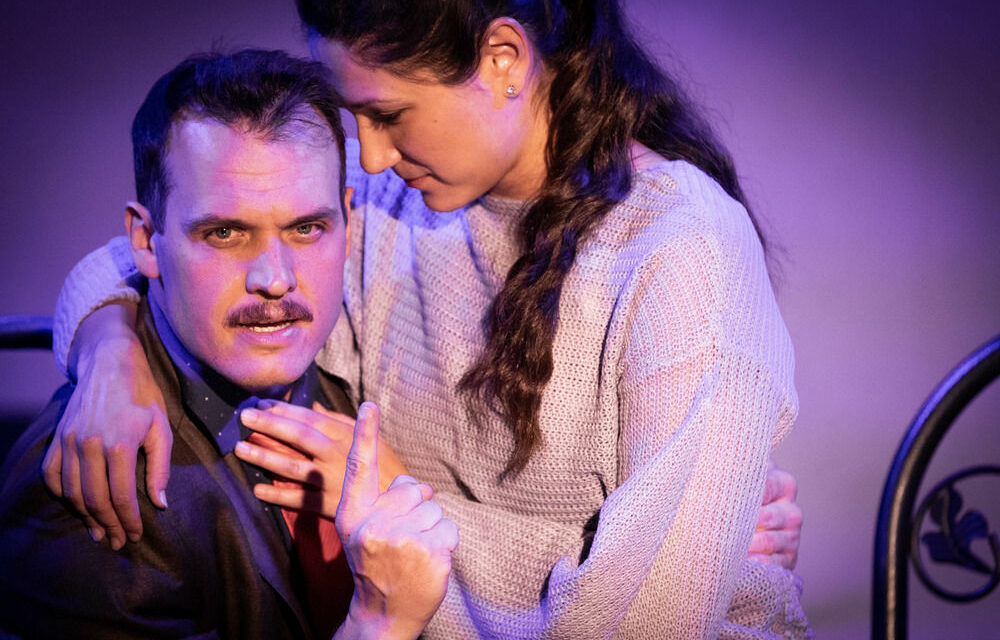 Kevin and Stephanie Connelly look like just another happy couple celebrating their (fifth) wedding anniversary at an upscale dining establishment.  They are happy, in love and carefree, until Kevin notices that the waitstaff is actually made up of minions that serve the enemy of M-Pulse – Kevin’s superhero alter-ego.  So begins Tattered Capes, an exploration of a super marriage that may not survive when it is revealed that Stephanie is also living a double life, only her superpowers far surpass Kevin’s and her role as one of ‘the five’ [think Justice League, or Avengers] makes her a much bigger deal overall.

As Kevin Connelly/M-Pulse, Travis Joe Dixon gives his athletic all in this highly physical production.  He is able to impact electricity, is fast on his feet and more than capable of going hand to hand with the wiliest bad guy thrown at him but when he learns that his wife is essentially the Captain Marvel of a group of superfriends, with the power to control people’s minds among a litany of other abilities, he begins to doubt the very foundation of his relationship.  This doubt crushes him and turns his own thoughts and feelings against him, and Dixon is able to navigate the twisty turns admirably.  As Stephanie Connelly aka Star Child [not sure if it is one word or two of if that is correct, her alter-ego is not listed in the program], Joanna Mercedes is a capable fighter, a strong presence and an actor capable of subtle emotional shifts as Kevin unravels. 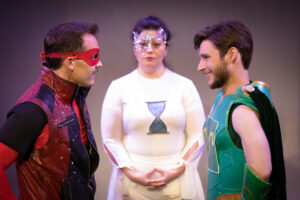 He wants more than anything to be a part of ‘the five’, whose members include Jonathan Strong (Chris Clabaugh), The Owl (Courtney King), Maximus (Tanner Risner), Lady Voodoo (Ann Hurd) and of course, his wife.  They are a powerful group who save the world on a regular basis while Kevin is better known for smaller acts of good, and Kevin is so eager to prove he has the skills to join, he puts his own interests first during what he doesn’t realize is a test and fails to impress the team.  This failure plus his growing certainty that he wasn’t even an active participant in a relationship he is sure Stephanie has manipulated turns a good man very, very bad and he ends up nearly killing everyone on the team.  Again.  That’s right.  Lady Voodoo steps out of her body to confront Stephanie, noting that Kevin will never be able to accept the truth about her identity.  In every attempt to do so thus far, it has only led to destruction.

So Stephanie sacrifices the truth to save the man she loves from destroying himself, and the world.  We end up back at the restaurant to celebrate their anniversary only this time, Stephanie disarms the minions before they can reach the table and Kevin is none the wiser.  By the end of the show we are fully on board with the premise, due in large part to the presence of what is referred to as Shadows – the man and women who act out fights behind screens in shadow play, who act as launching boards that allow the superheroes to mimic every iconic superhero move you’ve ever seen [one of the most imaginative and delightful aspects of the show] and who help keep the action fast-paced and safe.  Dressed in black with hoodies, Corrine Glazer, Gordon Meacham, Caroline Roncalli, Heather Rose, and Melany Smith help to make this feel like a story ripped right out of a comic book with choreography by Soda Persi that will make you smile and marvel at the choices.

Those Shadows help us grasp the world but when the shows opens, we do not understand what is going on for some time.  It’s not a surprise to find that this production evolved out of previous productions, including a run as part of Serial Killers at Sacred Fools.  Not to digress too far but many will be wondering what that even means.  Sacred Fools is a theatre company here in Los Angeles that was founded in 1997 and can easily make the top of the list of best companies in town every season.  Serial Killers takes place Sundays at 11 pm.  As the website explains, five serialized plays compete – three continuing stories vs. two new ones.  The audience votes for three and the two unfortunates are ‘killed’.  These shows develop a following over time and this production, in particular, has taken that for granted, assuming all of us will already understand who M-Pulse is and why we should care about him. 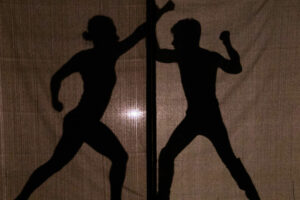 That said, the show manages to pack in a lot of physical action in a tight space without ever making us fear for anyone’s safety – that sounds geeky nervous but it’s actually a tremendous accomplishment. The use of shadow play works well and seems to be a running theme this year.  Maybe there’s a backstory we were missing if we weren’t already a fan of the character, but something felt off throughout the show and it seems likely it links back to this assumption that we will already know the world walking in.  Maybe the chemistry between Kevin and Stephanie was so good, we wanted to see more of them together as a couple before wave after wave of enemy forces tried to end their lives.  Throughout the play, there seemed to be a need to catch up to the story, when what we most love about seeing live theatre is our ability to revel in it as it unfolds.