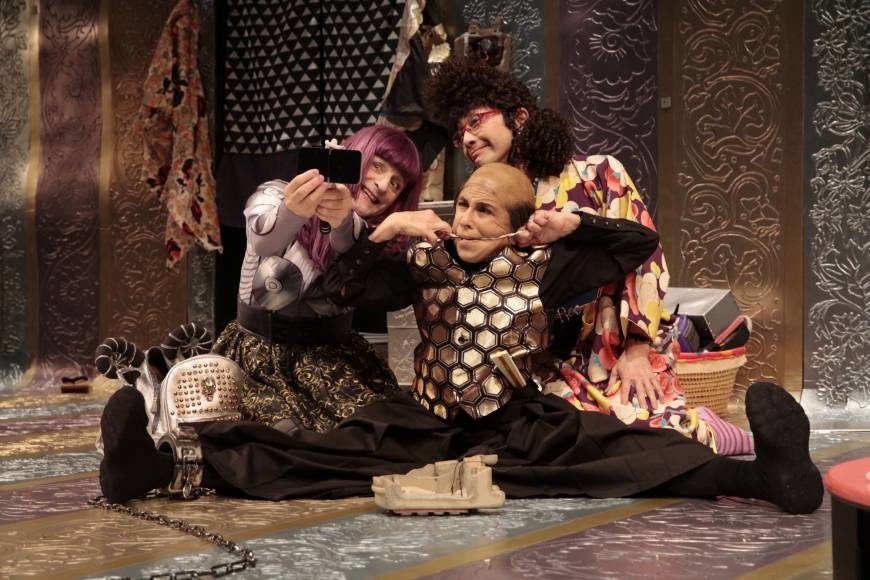 One Green Bottle is a new-ish work co-written by the renowned Japanese dramatist Hideki Noda and Will Sharpe, who shot to fame in Britain in 2016 with the comedy series Flowers, which he wrote, directed and also starred in.

The title of the play—now being staged at the Tokyo Metropolitan Theatre in Ikebukuro—comes from the final verse of the children’s song Ten Green Bottles, which, like so many nursery rhymes, has a dark side, as Noda, with his excellent command of English, knows well.

In fact, as the distinguished Welsh physical actor Glyn Pritchard—one of the three cast members along with Noda and the award-winning English actress Kathryn Hunter—disclosed to The Japan Times, One Green Bottle actually started life as Omote ni Deroi! (Step Outside!), a comedy written and directed by Noda that was staged at TMT in 2010, the year after Noda became artistic director there.

Like One Green Bottle, that play featured the same three characters: a housewife (played by Noda), her Noh-actor husband (the late kabuki actor Kanzaburo Nakamura) and their daughter (played alternately by the young actresses Haru Kuroki and Midori Laurence Ota.)

Also, like One Green Bottle, the family’s life in that play appears quite normal until one night all three insist they have important appointments and need to go out, though their dog is about to have puppies and someone has to stay home. Even though Dad is only set on seeing a Disneyland parade, Mom on watching a concert and the daughter on attending a meeting for members of an eccentric cult, they each insist they won’t change their plans.

From that impasse, things move from funny to freaky as the family members all turn on each other, which involves a great deal of physical performances and punchy one-liners.

And as jokey as this play may superficially seem, audiences would be advised to remember that the children’s song ends with utter annihilation as the “10 green bottles standing on a wall” at the start fall down one by one until “If the last green bottle should accidentally fall…there’ll be no more bottles standing on the wall.”

Pritchard explains that about two years ago Noda approached him and Hunter—both of whom worked with him before in his English plays The Bee (2006) and The Diver (2008)—with a proposal to create an English version of Omote ni Deroi! together to be staged in Japan with audiences listening through earphones in Japanese.

Yet when the three of them did a workshop two years ago in London based on a translation of the Japanese original, Pritchard says, “It proved difficult because in English the story lost the spirit of what Noda wrote and seemed too serious and heavy compared with the 2010 production we saw on DVD, which was full of comedy and was a little bit crazy and almost unreal.”

Fortunately, at that point, the vital missing ingredient appeared in the shape of Sharpe, who lived in Japan until he was 8 and knows some of the language because one of his parents is Japanese. With those attributes, he was the perfect person to graft some English jokes and dialogue onto Omote ni Deroi! to make today’s new-ish One Green Bottle.

“I found it both sad and funny how these characters unwittingly make life difficult for themselves. But when I first read the script, I didn’t have a full grasp of how playful and bright it was in the writer’s head,” Sharpe tells The Japan Times via email. “Then as soon as I saw a recording of the original production and saw the stylized set and the pacey, high-energy performances, I understood the tone much better.”

With that understanding, Noda’s idea to remake his satirical comedy with an English sense of fun was on the road to fruition—though as Sharpe says, “It was difficult to straddle British and Japanese sensibilities while keeping a strong sense of the original piece, and also trying to turn it into something new.”

Now, according to Pritchard, the reborn play is darker than the original, perhaps more in line with English sensibility.

“I think One Green Bottle is about selfishness, about the ‘me society’—you know, me, me, me, all taking selfies,” Pritchard explains. “It’s all about what I want and what I need…even though to move on we have to take people with us and we can’t live alone. But we forget those things. Also, in a larger worldview, it’s about self-destruction. They all accuse each other, and in the end, there are no green bottles.”

Even so, the actor says, “We still want to leave it open to alternative endings and surprises, just as you can have lots of different paths and things can change and you can alter your destiny by your behavior.”

However, he adds that a big part of the play’s appeal rests with its very physical sense of humor.

“If someone gets hit on the head with a frying pan, it’s funny all over the world, isn’t it?” he says. “We’ve spent weeks in rehearsal doing different scenes in different ways. Everyone’s had ideas and we’ve tried them out, so actually, we’ve been playing really.”

Sharpe also sent a promising comment about this project, saying: “Noda was very open-minded and gracious about trusting me to have a handle on Western audiences, and I trusted him to know what would work best with a Japanese audience. It was a balancing act, but as this play is set in its own world, I think hopefully it has international appeal.”

To add to the fun of this mixed-cultural piece, though Noda again plays the housewife, Pritchard takes the role of her geeky 20-something daughter while Hunter is her father.

“I thought my character should be very extraordinary and crazy-looking because there’s no point in me trying to be a cute, all pinky and frilly girl,” Pritchard adds. “So please do come to see the Shibuya goth-loli girl that Sharpe created for me.”

This article was originally posted in The Japan Times. Reposted with permission. Read the original article