Julia Pascal’s 12:37 at the Finborough Theatre: epic story of Jewish identity from Dublin to Jerusalem

Julia Pascal is a resourceful theatre-maker who is unafraid of being controversial. Her interest in the relationship between the personal and the political, and sympathy with both the victims of the Nazis and those of Israeli expansionism, means that her work is usually provocative, and always unsentimental. She has also been active in bringing some less known episodes of Jewish history to public attention. In her latest play, 12:37, she explores the relationship between a couple of Irish Jews and the fight to create a Jewish state in 1940s Palestine, where the main colonial power was Britain.

The epic story begins in Dublin in 1935, when two Irish Jews — Paul Green and his younger brother Cecil — are forced to move to England. Both are doctors, but Cecil is more attracted by theatre than hospitals. In London, the family witness the Battle of Cable Street and meet a fighter from the Spanish Civil War. After this, they end up in Palestine in 1946, and Paul participates in the creation of the state of Israel two years later. But their relationship is put under strain when they fall in love with the same woman — Rina, a Yiddish actor who is also a Stalinist Communist.

The title of the play refers to the time on 22 July 1946 when a massive explosion at the King David Hotel in Jerusalem killed 91 and wounded 26. The bomb had been planted by Irgun, a right-wing Zionist direct-action group, who were determined to establish a Jewish state by any means necessary. As ever, the distinction between freedom fighter and terrorist is a political one, and Pascal implicitly suggests that political violence is both necessary and also abhorrent. After all, the Holocaust changed everything for Jews. Without fanaticism, there is no liberation; without liberation, no future.

The international sweep of the story, which is composed of 29 scenes, explores the tension between two archetypes: Jew as healer and Jew as Warrior. As ever, the key to Pascal’s writing is its engagement with human complexity. Both Paul and Cecil train as healers, but both participate in euthanasia. Paul argues with a Zionist activist that the Brits are a common enemy of “Paddies and Yids”, but she points out that he is as British as Irish, and that anyway the Irish are antisemitic. Cecil starts off by singing in his synagogue and ends up by entertaining British troops in Palestine.

These contradictions carry a highly personal charge. Minnie, the mother of Paul and Cecil, is an Irish-Jewish working-class woman who disapproves of, and forbids, her eldest son from marrying an Irish Roman Catholic woman, whose family likewise reject him. And when she decides to re-marry in London, Paul’s anger at her intransigence is increased because he thinks she is in too much of a hurry. As for Rina, her experiences of the Shoah have been so traumatic that she feels dead, but is nevertheless drawn to both Paul and Cecil.

As director, Pascal has a vision of the play that includes both music and dance, and although this is difficult to achieve successfully with the limited resources of the London fringe, her production has a good pace. Music includes Hebrew ritual as well as “I’ve Got Sixpence” and “It’s a Long Way to Tipperary”, and the simple but effective staging is designed by Liberty Monroe. With its mixture of Irish jigs and Jewish wedding dance, as well as references to Yiddish theatre, this is a vibrant account of the complexities of national identity in the 20th century.

Similarly good is the acting: Alex Cartuson’s Paul and Eoin O’Dubhghaill’s Cecil are excellent as the two brothers, and have both passionate intensity and conviction. Ruth Lass is great as their mother, as well as doubling other roles, while Lisa O’Connor is both Rina and Paul’s Irish girlfriend, and Danann McAleer excels as the East End boxer who woos Minnie. With its links between Irish freedom struggles and the creation of a homeland for the Jewish people, both set against British imperialism, 12:37 is a history play which has enormous contemporary resonance. 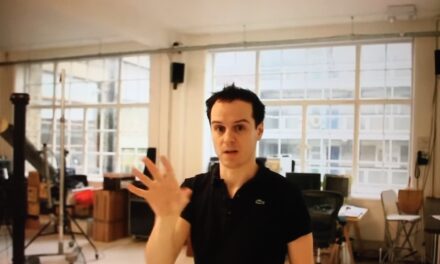