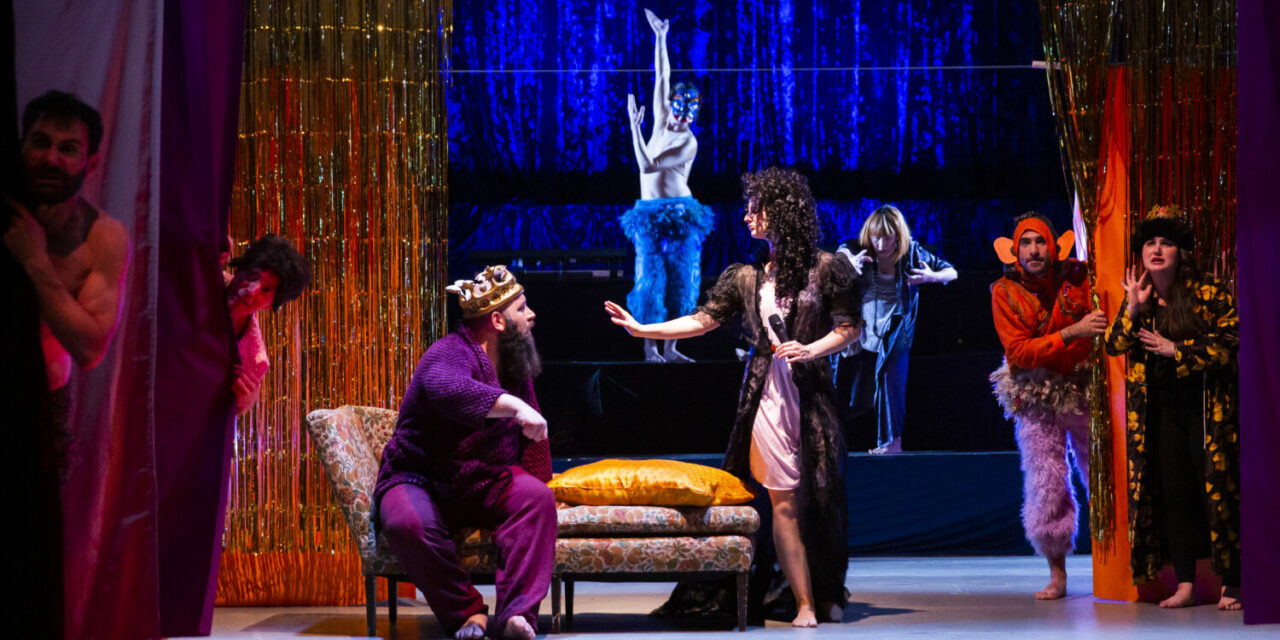 A drag queen lipsynching into a retro mike in a tight spotlight is the opening image of 1001SUR, the suitably inscrutably-named performance created by The Million Underscores (Nicolas Norena & Timothy Scott) and commissioned and presented by the Obie-winning Target Margin Theater (TMT). The show is a selection of the experimental troupe’s News of the Strange Lab, a new work showcase that concludes the season at TMT’s new home on the western fringes of Brooklyn’s industrial, dynamic Sunset Park neighborhood. TMT is headed by David Herskovits, Moe Yousuf, and Liz English in a mixture of Artistic Director capacities.

Lipsynching, drag, and drawn fabric curtains are integral components in the evening’s sprawl, a layered, dizzying, freewheeling yet ultimately thrilling adaptation of The Thousand and One Nights tales attributed to Scheherazade. While the program note touts the multicultural nature of the evening it is Latin music which is most notably sourced as the score of this noche. Tellingly, the press release details the setting as a roadside bordello on the border between two unnamed South American countries.

As the opening number concludes, the first of several curtains are drawn to reveal a myriad of tableaux set gradually further upstage at incrementally elevated levels. The evening’s most enduring imagery occurs at the highest stage. Here, starkly lit performers move in glacial choreography reminiscent of Robert Wilson’s pioneering blocking, touting lines that recall the sardonic wit and dream logic of Richard Foreman.

Elsewhere, there is the downstage narrative of a mighty king with a predilection for murdering his bed partners in lieu of the more chivalrous morning after a cuppa. The program lacks a breakdown of characters, yet the imposing actor who plays the king is a standout. His boombox baritone is an aural highlight of 1001SUR.

The evening, astutely helmed by director Nicolás Noreña, features a kaleidoscopic array of different voices, alternating nimbly between dialogue, narration, and singing. This shifting narrative structure is reminiscent of opera or experimental cinema. It is the sound and the drapery-as-set-design that are the evening’s most distinctive components. While Scheherazade’s “Nights” is the evening’s inspiration Noreña and Timothy Scott are credited as the playwrights. It is Noreña and Scott’s Brooklyn-based theater company The Million Underscores that is responsible for this dazzling production.

Other standout moments from an evening of plenty is the human-sized paper-mâché ball that is rolled out near the evening’s denouement. This absurdly large ball is a fitting end to a performance that does seem to take on a world of ideas and images, only to regurgitate them out in an amusing, insightful manner that succeeds on multiple levels. Whether it’s clever imagery or visionary storytelling, 1001SUR conveys profound ideas, both ancient and contemporary. Noreña is credited as scenic designer, with Ashley L. Kok as the imaginative lighting designer, and Matt Coggins as the innovative sound engineer.

In fact, 1001SUR is an unusually complex synthesis of the heady and the sensual, the clever and the profound. Given the rainbow of threads that constitute the evening, it’s remarkable how successful, how sublime is the production. Even if some components, some moments resonate more vividly than others the evening’s cumulative achievement is undeniable.