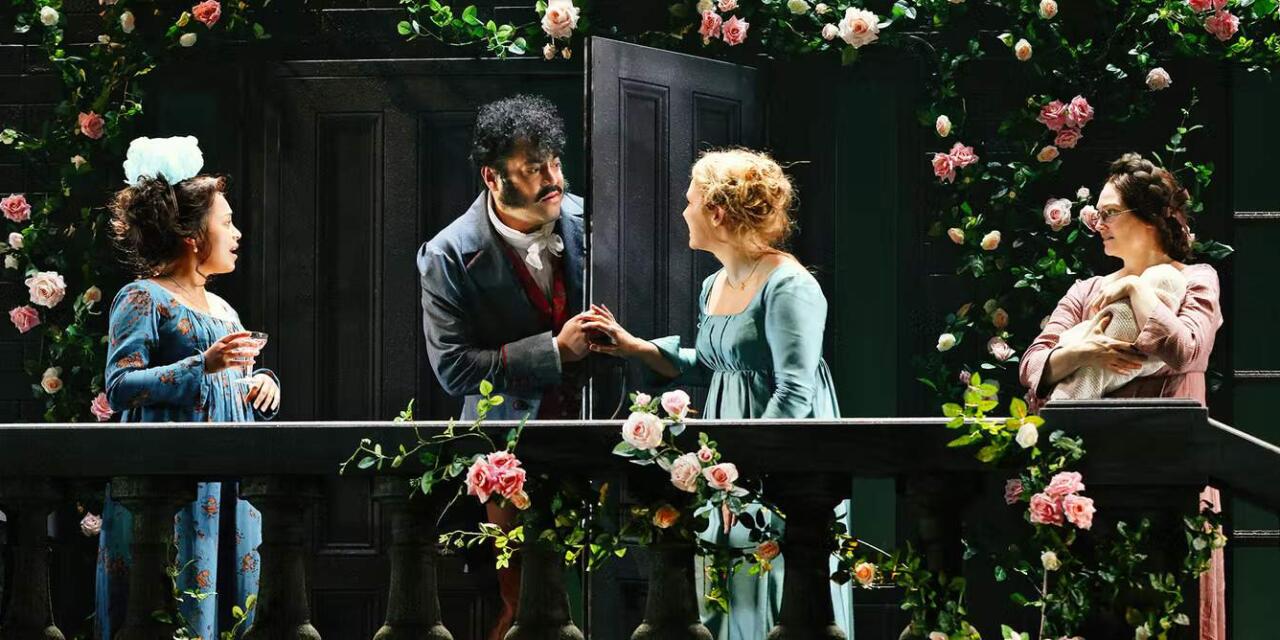 Review: The Tenant of Wildfell Hall, directed by Jessica Arthur for the Sydney Theatre Company

“You know when it’s the autumn of 1827, and you’re sitting in a church, having the wrong sort of existential crisis?” Gilbert Markham (Remy Hii) asks the audience at the beginning of Emme Hoy’s compelling theatrical adaptation of Anne Brontë’s The Tenant of Wildfell Hall (1848).

He is reminding us we are in a period drama — something easy to forget with this very modern-feeling tale of addiction, domestic abuse, child custody battles and female artistic self-reclamation.

At its center is a disastrous union between a budding artist, Helen Lawrence (Tuuli Narkle) and a villainous, oddly infantile rake, Arthur Huntingdon (Ben O’Toole). 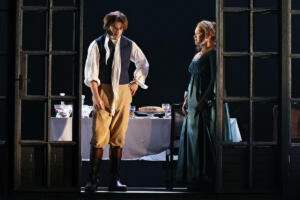 At the center of the play is the disastrous union between the artist Helen and a villainous Arthur. Sydney Theatre Company/Prudence Upton

The novel’s grim account of alcoholic domestic entrapment did not impress early reviewers, who condemned it as “coarse,” “disgusting,” “brutal” and “revolting.”

Nonetheless, sales were strong enough for Anne Brontë (publishing under the pseudonym Acton Bell) to pen a preface for a second edition only a few weeks after its release.

In this preface, she defended the work as an exercise in “unpalatable truth,” and a warning. The preface’s rejection of the “delicate concealment of facts — this whispering ‘Peace, peace’ when there is no peace” is articulated directly by Helen towards the end of Hoy’s adaptation.

Brontë’s novel was formally as well as thematically radical: a composite of documents and discourses, from letters and journals to gossip and slander.

It is framed as a correspondence between two venerable “old boys”: Markham and his brother-in-law Halford, who, having grown apart, seek to resuscitate their friendship through an exchange of intimate confidences.

Gilbert’s letters take the reader “back with me to the autumn of 1827,” to the village of Linden-Car (the play’s Lindenhope), where the arrival of a mysterious widow, Helen Graham, has prompted intrusive interest from the local community.

The new tenant of Wildfell Hall, a dilapidated mansion on the outskirts of the village, is a gifted painter, supporting herself and her young son Arthur (Danielle Catanzariti) by the sale of her artworks. 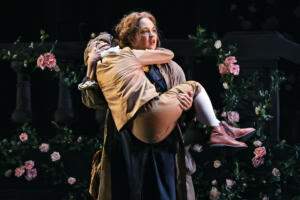 Helen supports herself and her son through the sale of her artworks. Sydney Theatre Company/Prudence Upton

Helen’s close relationship with her landlord Frederick Lawrence (Anthony Taufa) — who will eventually prove to be her brother — provokes a violent attack on Frederick by the increasingly infatuated Gilbert, as well as scurrilous speculation from the village gossips.

Eventually, Helen, who is beginning to share Gilbert’s romantic feelings, hands him her journal. It reveals that her husband Arthur Huntingdon is still living, and details the abuse that has led her to abscond with her child to her deceased father’s home of Wildfell Hall.

Brontë’s somewhat awkward structure requires readers to accept that Gilbert has transcribed Helen’s entire journal, with minor redactions, into the text of his exchange with Halford — effectively reducing her words to a prop for their homosocial exchange.

Lindenhope and Huntingdon’s estate are represented by a single, morphing set, with the revolving stage physically transposing characters between settings. Elizabeth Gadsby’s responsive stage design accentuates the unsettling parallels between the behaviors of the two male leads, whose love languages seem equally underwritten by gendered power. 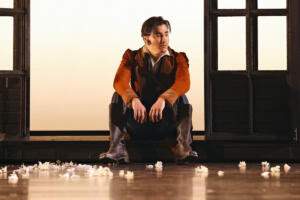 There is something unsettling in the male leads. Sydney Theatre Company/Prudence Upton

Doubled roles, including the dazzling Nikita Waldron as the coquettish, fortune-chasing Eliza Millward of Lindenhope and Annabella Willmont, Huntingdon’s mistress, and Steve Rodgers as both the village’s (here wonderfully comic) Reverend Millward and Huntingdon’s sleazy comrade Walter Hargrave (referred to, in one of Anne Brontë’s most brilliant put downs, as “a glow worm amongst worms”) underline this reciprocity.

Perhaps the most interesting pairing is Anthony Taufa’s combined portrayal of Frederick Lawrence and Huntingdon’s crony Lord Lowborough. Both are represented as men struggling with legacies of bullying.

As Hoy’s script emphasizes, there’s a bit of each character in the other: Heroes and villains are not so easily disentangled within a culture of toxic masculinity.

Hoy and director Jessica Arthur are gifted translators of the novel to the stage, and of its proto-feminist message to our post #metoo moment. 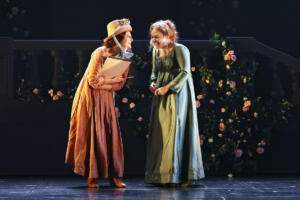 A period piece, there is nonetheless something entirely modern to this production. Sydney Theatre Company/Prudence Upton

Yet ultimately, Hoy is more optimistic than Brontë, handing out happier endings all round.

The coquettish Annabella, whom Brontë consigned to “penury, neglect, and utter wretchedness,” becomes one of Helen’s articulate proto-feminist posse, an indefatigable sexual adventurer.

Gilbert Markham is granted a capacity for explicit self-reflection and change. He, too, recognizes a double, in Arthur Huntingdon, and vows to alter his narrative:

We tell ourselves we’re not like them. That men like him are monsters. Separate. Not like us. But — he was familiar. When I read your diaries, he was familiar. And I do not want him to be. I won’t.

Recast, redemptively, as feminist ally, Gilbert in the end seems to know when it’s the winter of 2022, and you’re on a theater stage, having the right sort of existential crisis.

The Tenant of Wildfell Hall is at the Roslyn Packer Theatre until July 16.

This article was originally published by The Conversation on July 5, 2022, and has been reposted with permission. To read the original article, click here.