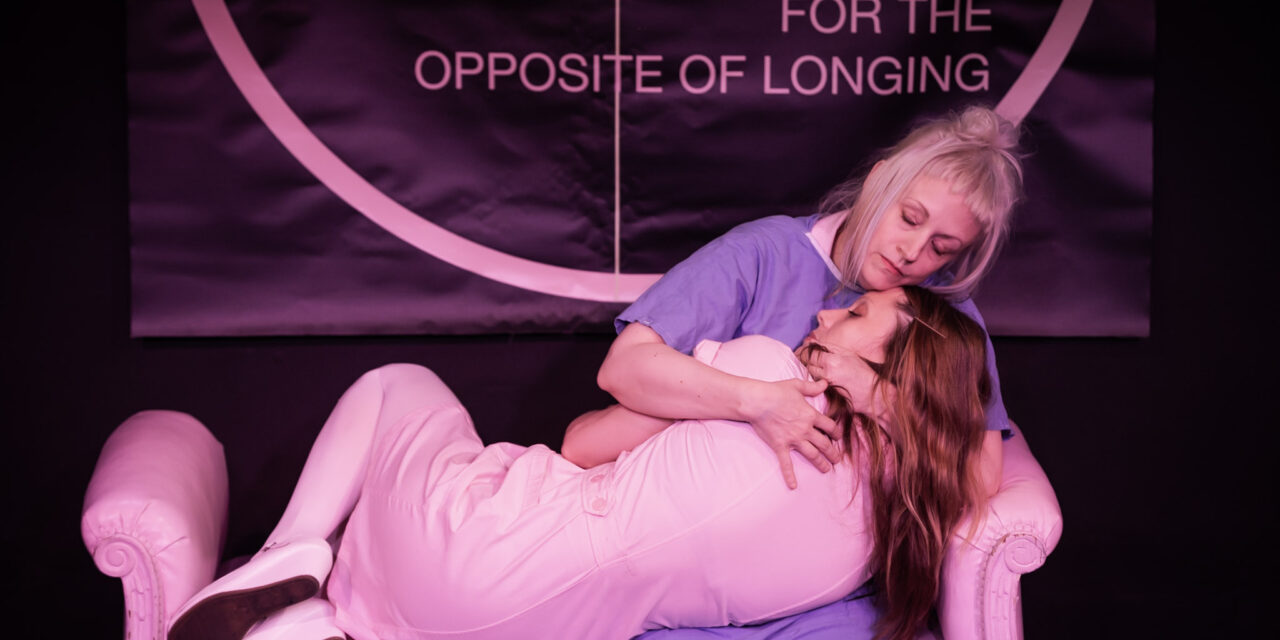 Lindsay Beamish (seated) holding Vanessa Peters in "The Institute for the Opposite of Longing" at Hollywood Fringe Festival. Photo by Matt Kamimura.

When attending the Hollywood Fringe Festival, it’s often best you leave expectations at the door.  The musical based on the latest television sensation could be the best thing you’ve ever heard while the mashup that features figures from famous theatrical plays could fall flat of delivering on its promise of dramatic intrigue and innovation.  And then there are the rare, beautiful performances that take us on an emotional journey we never could have expected.  The Institute for the Opposite of Longing is one of those performances, and it offers the viewer who chooses to see it a rare opportunity to explore grief, longing, and loss in a unique way. 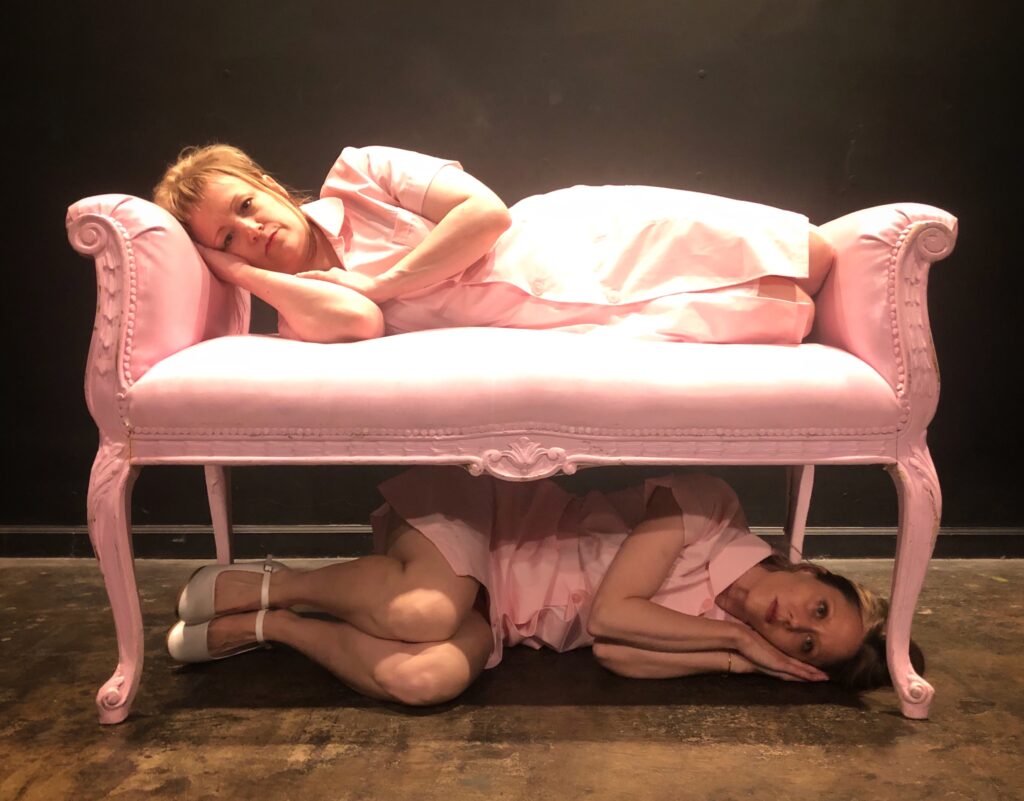 Lindsay Beamish and Vanessa Peters in The Institute for the Opposite of Longing at Hollywood Fringe Festival. Photo by Jane Paik.

Lindsay Beamish (who plays Karen Jacobs, Debra Kovaks and Julie) and Vanessa Peters (Laura Mulaney and Meredith) present their piece in one of the most intimate spaces available [The Actors Company on N. Formosa Ave.’s Little Theater] and then make it even more intimate by adding chairs on either side of the playing area.  The only place to hide is behind a curtain that both women use to step out of their role as what might be described as owner and operator of The Institute for the Opposite of Longing into a gown with a Needer name and number on the front.  They offer a simple service – Needers step into a chamber where they are shortly met by a Giver who takes on whatever role the Needer might require.  A doting child.  An attentive husband.  In a third case, the woman in the chamber turns out to actually be fine.  There are many funny moments that unfold as we meet each Needer in the chamber, even after they rate their level of need on a scale of 1 to 10 and explain where they feel it in their body.

The demands the Needers make reveal more about their character flaws than they intend but both Julie and Meredith navigate them well and seem to be good at their job.  The only trouble is, they have their own pain that they are struggling to master.  They step into their own chamber together and we understand almost immediately that they have entered it time and again in hopes of coming to terms with it all but Lindsay Beamish’s Julie, seems to be having the most challenging time processing.  Vanessa Peters’ Meredith wants to re-enact ‘Last Day’ but Julie resists.  Over the course of their interaction, we learn that the thing they need is a young boy named Franky – a boy they adopted who was taken from them when his birth mother changed her mind.  They open a suitcase full of clothes for a toddler and revisit the events that led up to his leaving via the use of one microphone, gesture and stylized physical beats that draw us closer to their experience, in spite of their alienating origins.  “You see this?”, they ask an imagined Franky, “I love you all the way around that?” – and we can see everything they went through on that day as if we were there with them. 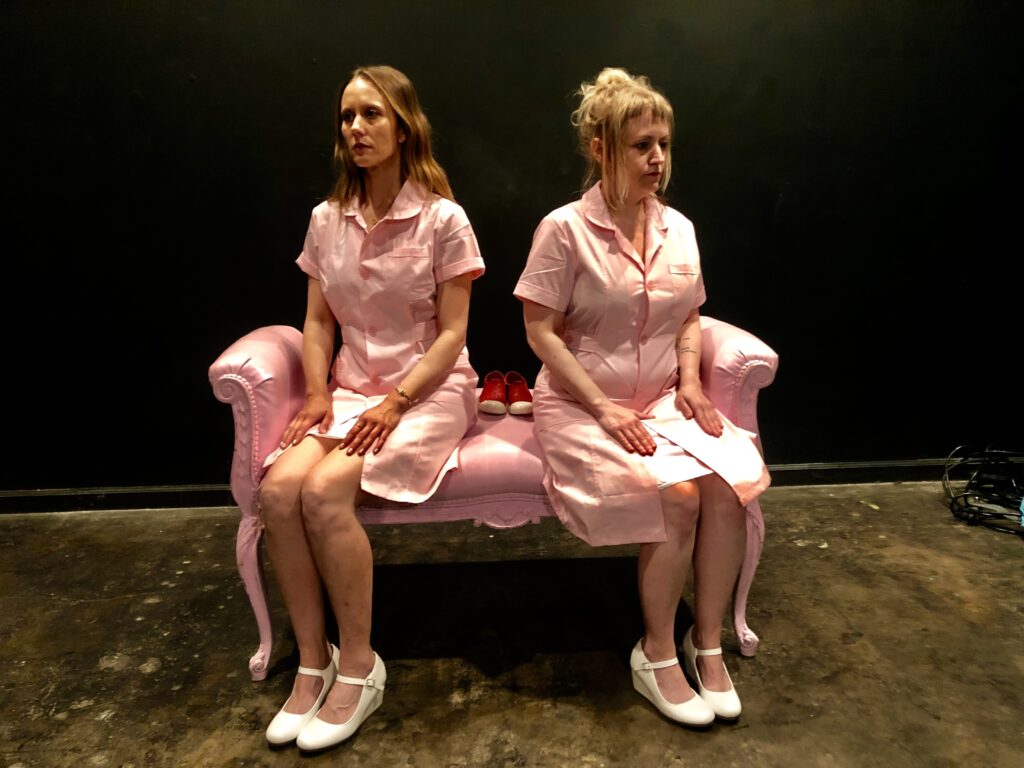 This piece is beautiful, mesmerizing and sad – I’m not going to lie to you – bring the tissues and open your heart.  It can be scary to be this vulnerable but don’t be afraid. Lindsay Beamish and Vanessa Peters have constructed the world of this theatrical experience so expertly that you are able to experience all they go through without having to take the weight of it with you. In other words, without explaining a thing, they make their story very clear and ultimately give us hope for a future where their pain, and whatever our pain might happen to be, is ultimately something we can bear.