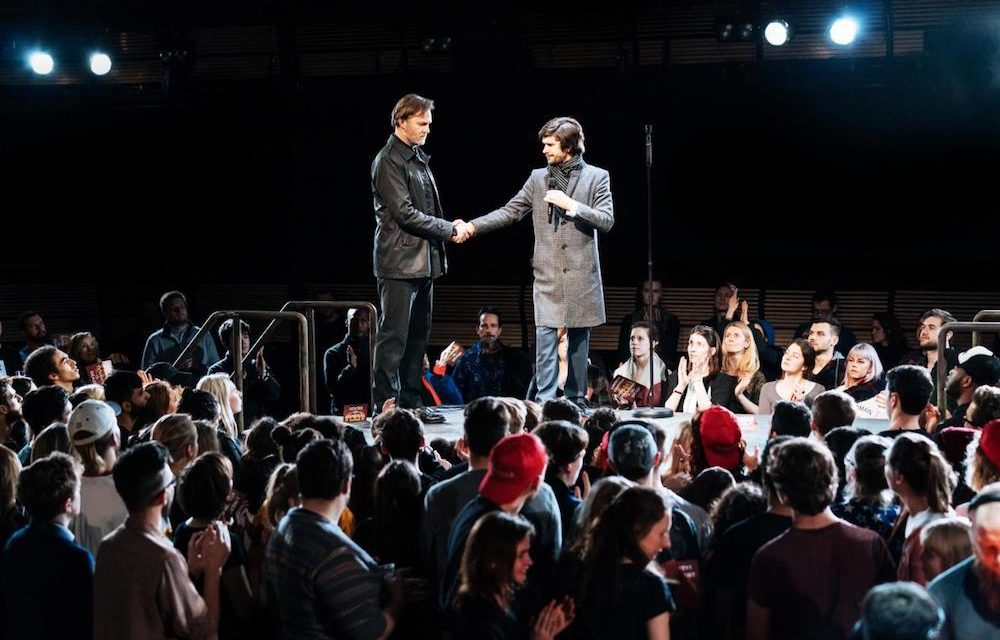 “Two things only the people anxiously desire—bread and circuses,” said the Roman poet Juvenal. He was describing the decline of the Roman Empire, but the phrase seems wholly appropriate as a description of current affairs. Tax cuts are bread; Donald Trump’s antics are a circus. All over the world, populism strides the national stages, and politicians manipulate the people with false promises and fake news. Meanwhile, intellectuals scratch their heads and blunder into the wrong actions. Yes, this is the world of William Shakespeare’s Julius Caesar, as seen by this venue’s artistic director, Nicholas Hytner, in a thrilling and stimulating production that reminds me of his excellent modern-dress, Iraq-war themed, Henry V in 2003.

For this show, Hytner has taken out the stalls seats of the new Bridge Theatre and created a promenade performance which begins, like a Trump rally, with a warm-up. As the crowd gathers, a rock band belts out Survivor’s 1982 hit, Eye Of The Tiger, White Stripes’s Seven Nation Army, and a couple more before ending up with a suitably raucous version of Twisted Sister’s We’re Not Gonna Take It. Stewards control the people, and T-shirts, beer, and red baseball caps are being sold. You can either join the throng or have a seat in one of the elevated galleries that surround the playing space. The music is loud. Real loud. The crowd loves it. Yes “it’s the thrill of the fight,” and we’re ready, really ready. After this exhilarating warm-up, one of the best pre-shows I’ve ever seen, the plot kicks off.

It’s a great story: the Roman Republic’s Julius Caesar is a successful soldier and demagogue who has the ability to appeal to the crowd, but his political rivals suspect that he has his eyes on a bigger prize—kingship. A conspiracy is hatched, with the noble Cassius persuading the intellectual Brutus to join. On the Ides of March, Caesar is assassinated, but his ally Mark Antony—in a brilliant funeral oration—incites the crowd to resist the plotters. A civil war breaks out, and Mark Antony and Octavius, who will later become Emperor Augustus, beat Brutus and his comrades at the Battle of Philippi. A violent uprising turns into an era of dictatorship.

The tragedy of Rome, according to the bard, is not only the vaunting ambition of its leaders, with Caesar’s desire to become hereditary king a symbol of the betrayal of the republic, but also the corruption of an entire elite. The arrogant men of power are each out for their own good, and all seem to lack civic virtue. They despise the common people, whom they find physically repulsive, but are unable to govern them properly. Little wonder that they finally submit to Octavius, the strong man who will rule them with a rod of iron. As for the small group of conspirators, Shakespeare understood that men sometimes embark on projects whose consequences they don’t really understand. Brexit anyone?

In Hytner’s immersive in-the-round production, platforms rise up from the floor, with the action taking place on these elevated levels. While David Calder’s Caesar may not be the most charismatic characterization, he has a blunt efficiency that also carries with it a sense of tiredness. A kind of lackluster Trump at the end of his first term. His lack of charm contrasts with David Morrissey’s increasingly majestic Mark Antony, who begins as a hungover, crumpled advisor and ends up as a strong-willed populist ruler. Ben Whishaw’s Brutus is a bookworm who is nervy, agitated and yet also excited by the prospect of power. But his essential nerdishness makes his fall unsurprising—Brutus is shown to be out of his depth in this power game.

One of Hytner’s innovations is to have several female actors play male parts in what is usually a very testosterone-heavy evening. This works brilliantly: Michelle Fairley is especially good, smooth, persuasive, and clever as Cassius, and Adjoa Andoh makes an impressive Casca. Leaphia Darko is similarly convincing as Brutus’s wife Portia. Kit Young’s Octavius is not, however, particularly right as the future Demi-God Augustus. Yet despite doubts about some of the cast, the general thrust of this production is exactly right: it is relevant without being preachy, visceral without being confused and exciting without being implausible.

Starting with a political rally that takes us to America, Hytner’s direction and Bunny Christie’s excellent design soon allude to Eastern European and Arab Spring situations, with touches of Ukraine’s Orange Revolution. This gives the show a suggestiveness that is more powerful than any narrow modern-dress interpretation. The assassination, using handguns rather than daggers, is shocking and the battle scenes are terrific: loud, explosive, and frightening. The crowd is pushed around by security guards, and when shots are fired they are forced to drop to the ground. Later debris rain down, smoke billows, and an orange glow suggests fires. Hytner has cut the text to a two-hour running time so there are no longueurs. Although it is a bit of a cliché to fear demagogues, now is certainly the right time to be reminded of the fact that revolutions tend to consume their leaders. In comparison, maybe bread and circuses are not such a bad diet.

Julius Caesar is at the Bridge Theatre until April 15.

This article originally appeared in Aleks Sierz on February 8, 2018, and has been reposted with permission.