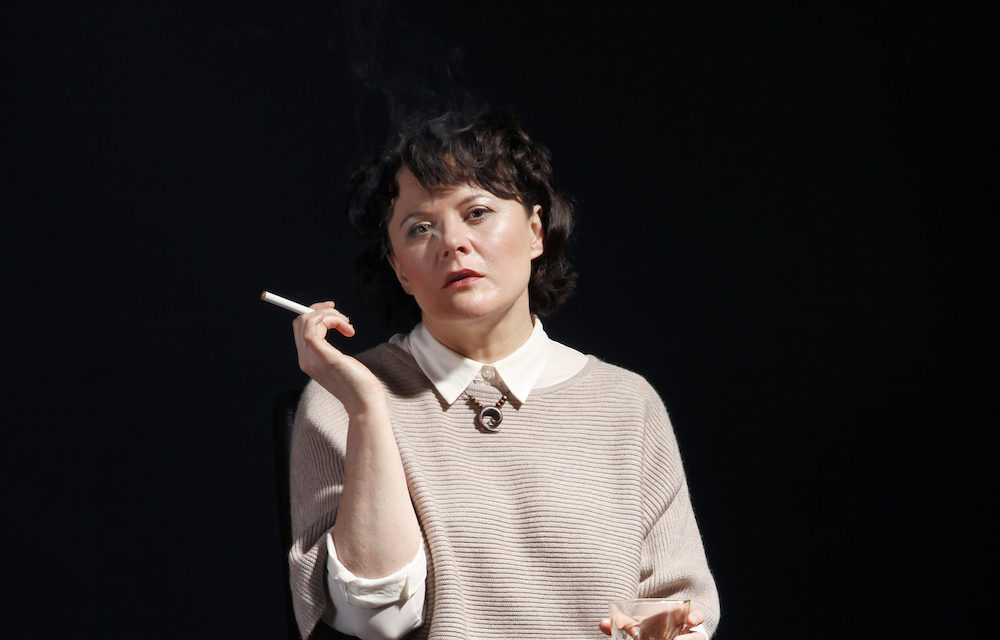 Monica Dolan in "The B*easts." Photo: The Other Richard

Monologues are increasingly popular in contemporary British theatre. In an age of austerity, they offer a cheap (only one actor to pay) and cheerful (no big sets to design) way of telling stories. At their least good they tend to bombard the audience with details and asides, clogging up the narrative like fat in an artery; at their very best they are an enthralling experience. Watch Dennis Kelly’s Girls & Boys, or anything by my hero Philip Ridley. Or, take a trip to the Bush Theatre, whose season of monologues continues with actor Monica Dolan’s provocative debut play, The B*easts, which was first seen in Edinburgh last year and is one of the very best performances I’ve seen in a while.

One way of looking at the truth of everyday life is to see it through the lens of extreme situations. Dolan, who performs the monologue as well as having written it, tells the story of an eight-year-old girl whose mother takes her to Brazil to get a boob job, breast enhancement. And she’s still just a child. Is the mother a monster? Or the daughter? Taking our hand and walking us through this moral maze is Dolan’s character, Tessa, a fortysomething psychotherapist whose chief characteristics are, in the words of the play text, “earthed, empathic, intelligent, neutral, sharp, dry, caring.” As she vapes, drinks whiskies, and tells the story of her involvement, a series of resonant issues emerge.

The case concerns Karen, not, notes Tessa wrily, her real name, but it’ll do: “We’ll call her Karen—as you probably know, her name isn’t anything like Karen, but we’ll call her Karen.” She gives breast implants to her eight-year-old daughter Lila (or should that be she allows her to have them?). When Lila goes to school, the teachers are appalled; they contact social workers. And then the media gets involved. And goes wild. After the huge fuss explodes, Karen is forced to see Tessa, and these sessions are the origin of her case study. Because of the nature of her profession, Tessa is able not only to analyze some of the implications of the situation but also to relate it to wider social situations—I bet she’s a Guardian reader.

A disturbing picture of child sexuality gradually comes into focus. Dolan shows how a child like Lila, or any little girl, can behave in a way that adults might see as sexual: imitating sexy dancing from the television, admiring the breasts of bikini-clad models in women’s magazines and trying to attract the attention of older males. Clearly, the child is behaving spontaneously and without any real knowledge, although many kids do experience sexual feeling. But, in adult eyes, this behavior might appear to be inappropriate, or uncomfortable, or worrying. And what does all this say about the myth that all children are little innocents?

Clearly, and rightly, Dolan thinks that childhood innocence is a myth and one that has troubling repercussions. Lila, in this account, at first behaves normally as a child, but gradually she does become fixated not only on breasts but on having a developed pair of her own. And Karen, who is not a bad parent, is worn down (as many parents are) by her daughter’s constant pester power, and she finally gives in—with distressing results. The implications of this are familiar to us: women’s bodies, from an early age, belong not just to themselves, but to the male gaze. Sex sells magazines and newspapers. Celebrity is all about appearances. Young women are increasingly seen as fair game.

Dolan creatively blends recent cases in which, for example, Abercrombie & Fitch, marketed padded bikini for girls as young as eight, or the pervasive memory of the cases of child killers such as a Mary Bell or Thomson and Venables, with her story. As well as these instances, there is an element of class: Karen is “Essex-y, but not from Essex.” The sexualization of children is, argues Dolan, a part of the sexualization of all women, especially working-class women, and body image in a consumer society needs enhancement from make-up, sexy underwear, and high-heels. Cosmetic surgery then, in this pervasive push towards conformity and normatively, is just a small step away.

The writing here is brilliant: it is convincingly chatty, yet serious (you can feel Tessa controlling her anger, her despair, her dismay); the speaker never dwells too long on details, nor does it over-elaborate. This means that the audience can fill in the gaps, using our imaginations to picture what Karen and Lila are like, as their images form in our minds, tantalizingly distant, but occasionally lurid: we can easily imagine how the tabloids have presented them—screaming headlines and fuzzy photos. At the same time, Tess fields some phone calls from her family members, and these deliver the rather sad connections between this case and her own private circumstances.

As directed by John Hoggarth and designed by James Button, Dolan the performer appears seated in a pool of light, in her rather anodyne office, dressed in neutral shades and a shapeless jumper, deliberately concealing her own body shape from her clients, and from us. Over the course of 65 minutes, Dolan, the BAFTA-winning star of the BBC’s W1A and ITV’s Appropriate Adult, conveys an intelligent coolness as she makes her feelings known about social issues such as the pernicious effects of women’s magazines, while subtly suggesting her own uncertainties and passions. She also implies that if this is a story about breasts, it is also a story about beasts: the media, our preconceptions, and our mistakes. It really is an outstanding performance of an outstanding piece of writing.

This article originally appeared in Aleks Sierz on February 22, 2018, and has been reposted with permission.