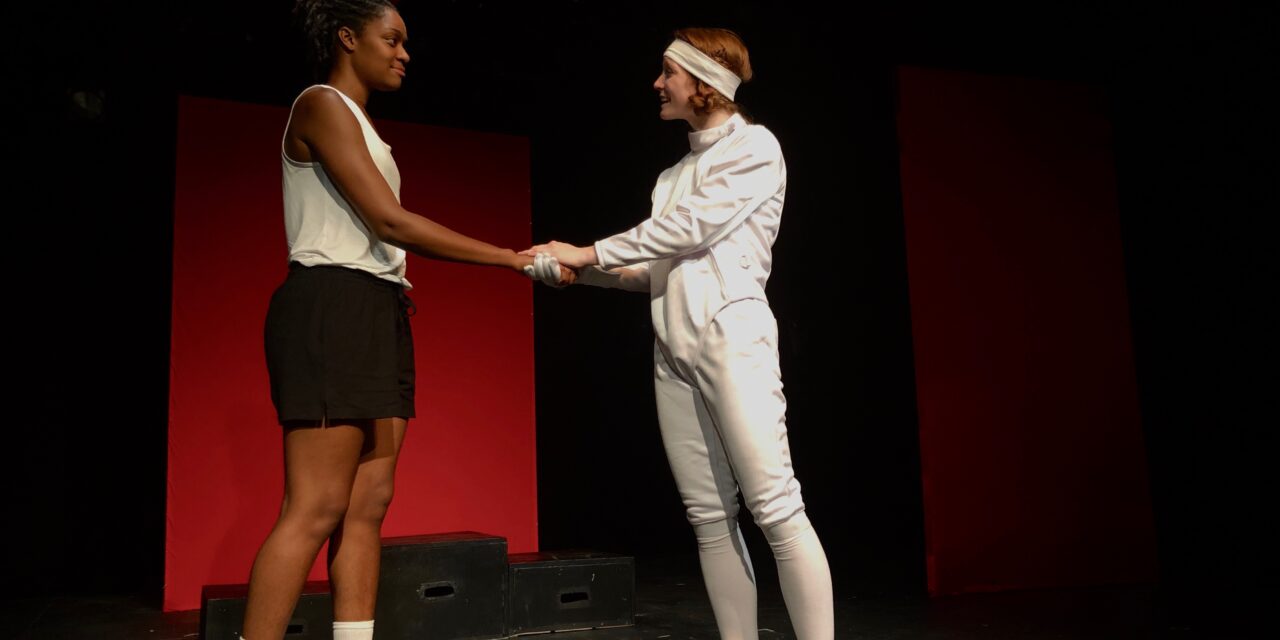 Henry Naylor’s Games, now at the SoHo Playhouse, highlights those human activities that are fundamentally performative but are not, technically, theatre: sports, politics, and identity. It dramatizes the lives of Helene Mayer and Gretel Bergmann, two German Jewish athletes who were Olympic hopefuls for the notorious 1936 Berlin Games. The play is like a high jump – short and simple, yet huge.

The new production, directed by Darren Lee Cole, is fittingly sparse. The play is performed by two actors alone, here, Lindsay Ryan as Helene and Renita Lewis as Gretel. Most of the script is alternating monologues; the two characters, who met only a handful of times, rarely interact. The scenery consists of three rectangular panels of blood-red cloth panels, making the simple costumes – Helene’s crisp white fencing uniform and Gretel’s white tank top and black gym shorts – pop. Occasionally, one actor will disappear behind a panel to facelessly provide the dialogue of, say, a rival athlete, or a Nazi referee.

The lack of interaction can be alienating, and it’s unclear who, in their minds, Helene and Gretel are addressing; this question mark can give their speech an unfocused quality. But the two characters’ conflicts, which overlap, are well-defined. Gretel, a high jumper, wants the chance to compete, but understands that her Jewishness is being weaponized against her. Helene, a star fencer from a young age, wants to be able to compete on her own terms. She refuses to identify as Jewish, or to allow politics to infiltrate her single-minded pursuit of championship. 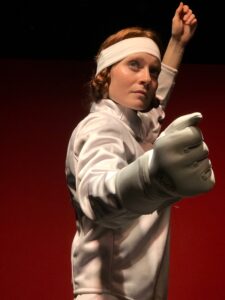 The script can be heavy-handed at times, even pandering. On the other hand, is there a way, or a reason, to be subtle about Nazi fascism, especially in Trump’s America? But where the production becomes most interesting is on the question of race, in a way that is not written into the script. Renita Lewis, a black actor, brings so much strength and intensity into her portrayal of Gretel, she took my breath away. But this was only after I had an intense and brutally honest dialog with myself. I strive towards anti-racist thought and action, and I’m working through what it means when non-black characters are played by black actors, especially when that casting decision has meaningful repercussions in the production. Yes, there is a robust black Jewish community, but this is a play set in 1930s Germany. Having never before seen a photograph of Gretel Bergmann, I was fairly certain she didn’t look like Renita Lewis. 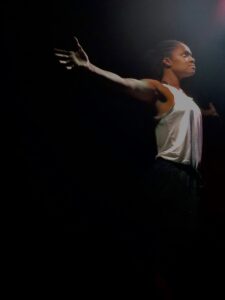 And then I caught myself, and I thought about the historical precedence for insistence on strict division of racial categories, such as the Nazis imposed. I myself am Jewish, and the descendant of Holocaust survivors, yet I am also, as James Baldwin wrote, one of “those who think of themselves as white.” And then I let Lewis’ performance transport me. She did not perform Jewishness or Germanness, but ambition, struggle, and disappointment. She was a good deal more convincing than Ryan who, as Helene, seemed lacking in emotion, not as a calculated choice but as a character flaw.

And then an added layer of meaning appeared, one which Naylor could not have intended. Helene’s insistence on remaining aloof from politics, on being neither German nor Jewish but simply herself, a fencer, evoked for me the problematic rhetoric of contemporary white Americans who refuse to think about structural racism, and refuse to examine their role in it. Choosing to be apolitical is a luxury, a luxury that is easily stripped away when one’s identity becomes politicized. During one of the few dialogic moments in the play, when the two athletes are both competing to join the German Olympic team, Gretel tries to establish solidarity, telling Helene that, as the two Jews in the tryouts, they must form an internal unit, a team of two, but Helene insists that she plays for herself and herself alone. Helene’s attempt at detachment is, of course, ludicrous. In Nazi Germany, it didn’t matter whether or not one practiced Judaism or identified as a Jew. Jews’ identity was politicized and so, they, we, did not have the luxury of being apolitical.

In 1936, from the podium at the Berlin Games, Helene Mayer defiantly gave the Nazi salute. This moment defined her career and, according to Naylor, turned her from an icon into a traitor. In 1968, from the podium in Mexico City, Tommie Smith and John Carlos, the American winners of gold and bronze, in the 200-meter, raised their fists in the Black Power salute, turning them from mere champions into icons. Sport is never apolitical, because it’s national, it’s performative, it’s human. All athletes can do, if they’re lucky, is decide what they want their victory to mean.