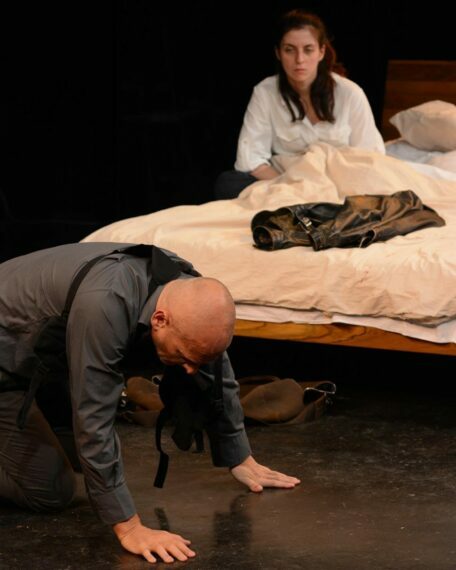 Mental Eclipse Theater’s production of Sarah Kane’s Blasted is, admittedly, a mixed experience, but is ultimately a success, offering several clever solutions to a text riddled with difficult dramaturgical challenges. Occasionally, some directorial choices seem under-executed, and some sections of dialogue lack the performative emotional core that is so present within the written script; despite these missed opportunities, though, Blasted is a qualified triumph, with its more powerful moments mostly making up for its timid ones.

Blasted is a ninety-minute exploration of the relationship between rape and war, using the unevenly-matched Cate and Ian’s sexual violence as the impetus for global destruction. Upon Ian raping Cate, a bomb blows up their hotel room, leaving space for an unnamed soldier to claim the room as his own. In its final sequence, Blasted explores a formalistic shift from Ibsen-ish naturalism to Beckettian hellscape, leaving its audience to make the connection between trigger and explosion for itself. Known for its initial, brutal tabloid criticism, Blasted is the poster child for the “in-yer-face” theatre movement, a genre categorized mostly by its tendency to present audiences with difficult, and often graphic, subject matter.

Tom Crawley has no easy task in directing Kane’s first play, which features such infamous images as eyeballs being sucked out, babies being eaten, and a literal bomb going off within a Leeds hotel room. Crawley, clearly working with minimal resources, makes admirable attempts at each of these emblematic images; eyeball-sucking is effectively represented by a quick application of makeup to Ian’s cheeks, while baby-eating is excellently, naturalistically represented by the chewing of white gauze. The blasting of the mortar bomb is imaginatively executed by destroying the segmented white perimeter of the playing space. This destruction of the perimeter, previously interpreted as a practical, innocuous barrier to the playing space by the audience, is an excellent, semiotically-sound staging of an event impossible to naturalistically simulate onstage. The image is preserved, so then too is the impulse behind it. Very well done.

Despite these successes in the representation of the dramatic image, Crawley, unfortunately, struggles with awkward scene changeovers, covering them with too-long rain sound cues. Crawley is to be commended for each rain cue being different (as is specifically indicated within the Blasted text), but the blue-outs with black-clad stagehands placing props and scenery are narratively ineffective, thus making the sharp text’s pacing feel at times disjointed and sluggish. The actors playing Cate and Ian are presumably capable of destroying the space around them in full light; as Kane herself said, Cate’s rape is the “seed” and the blast is the “tree,” so why not, then, implicate Cate and Ian in their world’s destruction? The connection between scenes feels unfortunately under-experimented and would have benefitted from further play within the rehearsal room.

“In-yer-face” theatre suggests a visceral discomfort that should alienate and disquiet a given audience; Crawley’s Blasted achieves this brutish voyeurism in moments of sexual violence and full nudity, plus in the excellent re-interpretation of burying bodies under the hotel’s floorboards. Despite these strong moments, though, Crawley’s (and sound designer, Dave Moskin’s) vision fails to fully confront its audience with the atrocities of the war it allegedly so abhors. The sound of a car backfiring is at the same volume as that of the intermittent rain; this moment should be a complete, heart-stopping surprise both to Ian and to his spectators, but instead feels expected and quite tame. This sound cue, along with that of the blast itself, does not fulfill the goals of “in-yer-face,” feeling instead more a realization of “near-yer-face” theatre; Kane’s message is one whose transmission is contingent upon muted empathy and exaggerated horror, and Crawley’s production, though occasionally true to Kane’s broader vision of what constitutes effective theatre, is inconsistent in its understanding of this fundamental idea. Audiences can handle more than we, generally, give them credit for; exploration of this limit, especially in such a piece as Blasted, would not have been in vain.

Tamalynne Grant’s Cate is excellent, embodying the bizarre, layered empowerment that so choppily develops over the course of the play. Grant’s progression from willing participant to violated victim to unbreakable survivor is to be commended; this arc is one difficult to realize without falling into contrived representations of post-apocalyptic female empowerment, and Grant successfully avoids the cliched in her portrayal of Cate. As well, Grant navigates the taxing physical task of onstage intimacy beautifully; the level of control with which she gives herself over to Dave Moskin as Ian is somehow both precise and ambivalent – the perfect representation of Cate emotionally.

Dave Moskin’s Ian has perhaps the more challenging task; how can we, the audience, possibly feel empathy or even sympathy for this rapist, dying, racist, trauma-stricken man? Moskin embodies Ian’s sexual desperation well, and his feelings of heterosexual inadequacy even better. Moskin occasionally falls into the trap of “shouting equals angry,” which nearly approaches the realm of cliched at times, but Moskin is ultimately a masterful presence onstage. By Blasted’s conclusion, we do feel some sympathy for this uncountried, morally reprehensible scoundrel, and as such, understand that Moskin has accomplished this difficult goal of mutual understanding between villain and victim. Jason Cloud’s Soldier is also heartbreaking to watch, incredibly; despite witnessing him rape and vandalize the world in which we have become comfortable, we understand that his actions come from a place of deep, unhealable grief. Cloud does what he is able in the short time he is active on stage, and suitably fuzzes the line between protagonist and antagonist that each of the three characters so aggressively walks.

Mental Eclipse Theater is to be commended for this fledgling production of Sarah Kane’s Blasted. Kane’s work is undoubtedly ambitious, meaning her plays are often, tragically, left unstaged. Mental Eclipse Theater’s courageous leap into the world of “in-yer-face” is an encouraging first attempt at Kane, leaving me feeling hopeful for the future of Kane as a whole. Even with a few directorial missteps, Blasted asks important questions of complicity both in interpersonal conflict and in intercultural war. Though we as an audience are perhaps not as viscerally attacked by image as we should be within a self-proclaimed “in-yer-face” production, there is ample evidence that we will be so ambushed in future productions from this team.

Its billed cast was:

Its billed creative team was (in order of accreditation within program) :

My sincere thanks to the cast and crew for speaking with me both before and after the performance; the generosity of spirit within this collective speaks wonders of its capacity for art.