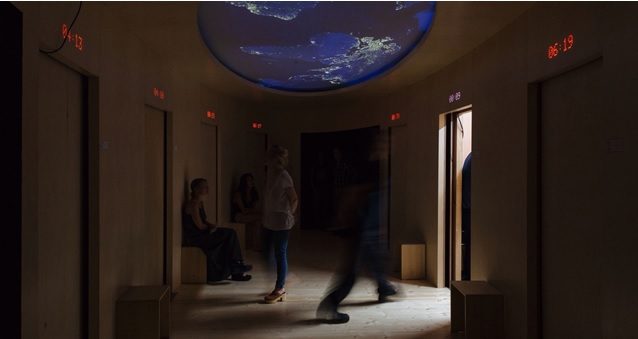 Image from the official website of Milan’s Piccolo Teatro

Nachlass: German word composed of “nach” (after) and the verb “lassen” (to leave). “Nachlass” corresponds to the whole of material and immaterial goods left by a deceased person.

In a more specific sense, especially in research, “Nachlass” indicates the totality of records (letters, works, documents…) that were in the possession of a person or a collection that a person has built during his or her lifetime.

Nachlass: Pièces Sans Personnes is the latest work by the German collective Rimini Protokoll, counting Swiss director Stefan Kaegi and scenographer Dominic Huber as its creators. And, as far as a project like this goes, their roles appear to be equally balanced.

Legacy: Plays Without People is what the title would translate to. [1] German and French: two of Europe’s main languages, rolling daily off thousands and thousands of tongues. More specifically, two of Switzerland’s main languages. A country which is in itself notable as a beacon for a peculiar category of people: those who want to die.

Sickly individuals forced to spend their days in pain, and unable to put an end to it in their respective countries, flock to that tiny stretch of land and Alps nestled among neighboring European giants. And there, under a different set of laws, they peacefully pass away, voluntarily marching towards their legal end.

Next Tuesday, 18 August, I’m going to Basel, Switzerland. To die.

Nachlass concerns these people as it does the rather unique “offer” they are given in Switzerland. But that’s not all of it. The focus of this work is much larger. Those who walk towards assisted suicide aren’t the only ones leaving traces of their passage, choosing what to be remembered for. And indeed, it is from the latter category that Kaegi and Huber’s work selects its protagonists: those who, whether about to die or unsure of their fate, name an abnormally large number of heirs. Their thoughts, feelings, and memories aren’t restricted to families, friends, people close to them. They await behind Nachlass’s curtains for everyone to see, experience, share.

The entire world is welcome to claim their inheritance, to share their legacy.

Eight people. Some of them dead, others still among us. All perfectly aware of the need to pass away, sooner or later–and willing to share what is theirs while they still hold it dear. The terminally ill, those who were about to find final respite in Switzerland, and the ones who would rather be ready for their passing than be caught unprepared, are presented to us with little distinction. Whether they live or not, as a matter of fact, is irrelevant. This is their stage, and they are all, equally, its actors.

Or rather, the lack of them is. 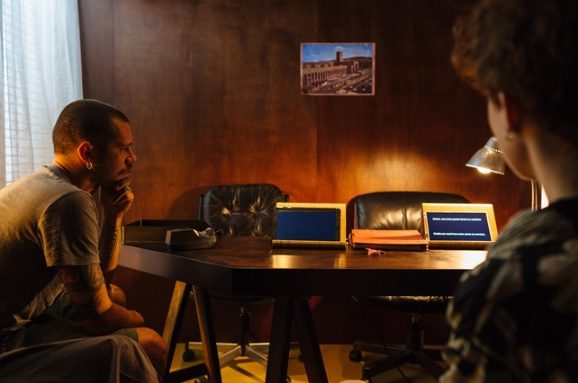 I would not want to live if I were unable to remember, to feel, or if my emotions were completely obfuscated.

Plays Without People is how the title goes. And what we see “on stage” is but the shade of its main characters, the sign of their passage. Empty stages where the play comes to life without the actual need for its actors. Eight rooms meant to look like theirs, full of their dearest things and with their recorded voices echoing inside, act as windows on the lives they have lived, on the messages they want to give the world. Each using their tongue: subtitled in a variety of other languages for easy, global access, so that everyone may know what they were like, what they did, what they wanted to do.

Whether about to die or ready to, they make their proud statement about life.

The setting for such a unique experience is a peculiar one, as much a hotel as it is a morgue, though it might just as easily be a gateway to the afterlife. Dull, curved walls basking in the semi-darkness, the shape of automated sliding doors carved in their surface–complete with nameplates: this afterlife is an orderly one, after all–outlining the existence of other places: of the eight rooms housing voices, stories, souls. A timer runs above each one, letting visitors (usually no more than five or six per room) know how long it will take to see more from the other side, to claim new legacies, new Nachlässe.

And, above the audience, the world. A digital planisphere which, every few seconds, lets out a mute flash, signaling a death somewhere around the planet; at least according to simulated calculations. Hundreds of people who allegedly passed away during Nachlass’s visit time (roughly an hour and a half), but whose legacy we are denied.

Left to hope that someone was there to collect it, to store its memory for those to come.

Photos are like corpses. We are afraid of them, but in the end, the photo is always beautiful.

Nachlass was available at Piccolo Teatro’s Studio Melato in Milan (Italy) from January 10-20, 2018.

Its schedule now goes as follows:

Further expanding upon the project’s contents, granting the reader more glimpses of what is to be expected inside each room, would do the work harm.

Eulogies aren’t meant to be transmitted, and heirs are expected to show up for the reading of the will.

If you have a chance to be among them, do so.

This one is an inheritance you don’t want to lose. 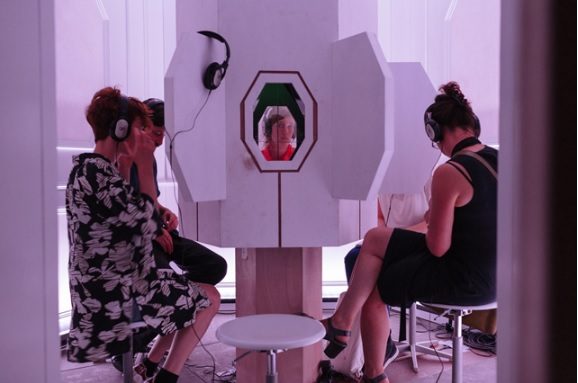 1. The translation itself is somewhat difficult due to several puns closely associated with French. “Pièces” stands for both “plays” and “rooms,” fully exploiting the ambiguity of its original meaning while perfectly fitting the project’s execution. “Sans personnes,” on the other hand, means “without people”: in spoken French, however, the final “s” is likely to be lost, thus leaving “sans personne,” “with no one.” People absent from the stage, rooms which are left empty during their owners’ absence or after their passing: the subtitle plays on all such meanings. I’d like to thank PhD student Serena Codena from the University of Pavia for providing an accurate explanation of the phenomena associated with the French language.