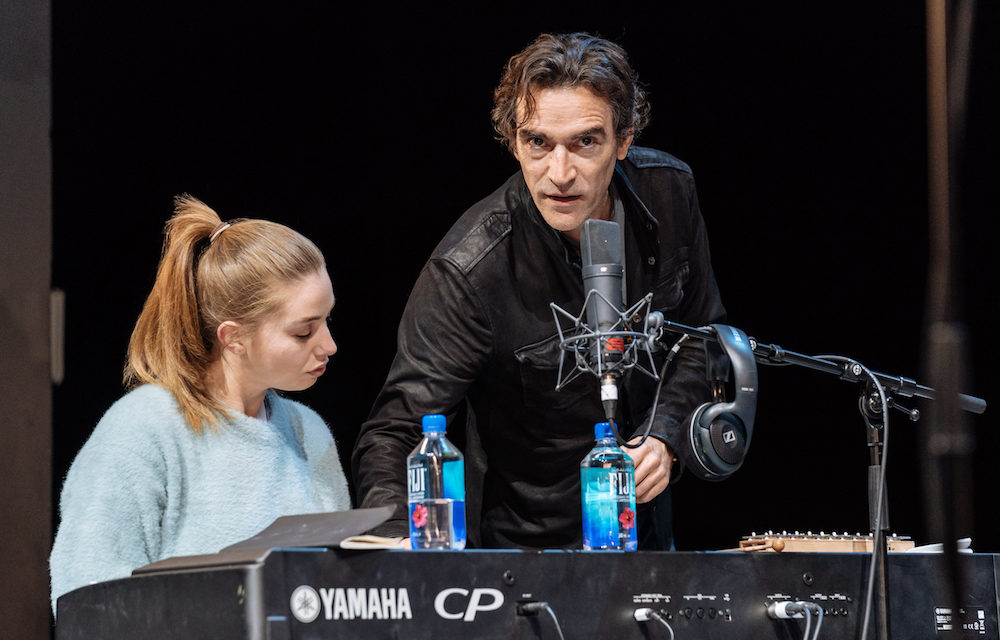 Playwright Joe Penhall and the music biz? Well, they have history. When he was writing the book for Sunny Afternoon, his 2014 hit musical about the Kinks, he had a few run-ins with Ray Davies, the band’s lead singer. A couple of years ago The Stage newspaper quoted Penhall as saying that his initial “bromance” with Davies had “rotted into a cancerous feud,” and that the singer had wanted a writing credit for Penhall’s work. The pair have since patched up their differences, but I am sure that the emotional fuel of this conflict powers Penhall’s latest play, whose production at the Old Vic gets a shot in the arm from its brilliant cast.

Mood Music is all about the music industry and the pains of creativity. It opens with two artists explaining themselves to their therapists: Cat, a young up-and-coming Irish singer-songwriter, talks to Vanessa, while Bernard, her middle-aged living-legend producer, talks to Ramsey. Although these meetings are happening in different places, both pairs are on stage at the same time and their dialogues overlap in one of the paciest and most thrilling opening scenes I’ve ever seen. Yes, it really is that good. Then, because this is a story about a dispute about the authorship of music, come the lawyers: Cat’s Miles and Bernard’s Seymour.

With rapid strokes and marvelous economy, Penhall throws us right into the middle of this conflict. Cat claims that, on her first album, Bernard has failed to acknowledge her authorship of her song lyrics, and that he has changed her musical ideas to produce work which he then takes all the credit for. As flashbacks show some of their interactions, we can readily believe her. But then the sessions with their therapists suggest not only that both of them are damaged people—she vulnerable; he a monster of unfeeling egoism—but also that creative collaboration is a messy business. When several people create a song in a studio, who exactly contributed what?

On top of this Penhall lays down some additional tracks: history, the Blitz, the 1970s, parents, marriage, loneliness, anger, celebrity, and mental disorder. Then there’s the story of Cat’s American tour, in which she was once so catatonic that she had to be carried onto the plane that flew her between cities, a fact that Miles, her lawyer, wants to exploit. After all, she was half naked at the time. Oh come off it, argues Seymour, Bernard’s lawyer, everyone gets stoned on tour—what’s the big deal? Okay, then give her the songwriting credit she deserves and I’ll drop the case of kidnap. The what? Like a coke-induced rant the story simply flies along, each exchange more inventive than the previous one.

Penhall’s first job was as a music journalist so this play is something of a homecoming (along the way he’s also worked with Nick Cave and Massive Attack’s Greg Pruess). The central conflict between authenticity and commerce, between art and business, between originality and selling out, is familiar, but here appears in a shiny new stage costume, with the glitter of smart lines and some good belly laughs: “The music industry isn’t about healing heartbreak and vulnerability—it’s about selling it;” “Music is medication;” “Girls are the new boys.”

Completely in tune with contemporary preoccupations, Mood Music is sensitive to gender issues such as unequal pay and the concerns of the #MeToo phenomenon. But it also has deeper psychological strata, being about how our parents haunt our actions and how the feelings of the present echo the pains of the past. Cat is characterized as a diva, a drama queen, a difficult woman—by herself, yet of course with an edge of hilarious irony. Likewise, Penhall creates Bernard’s character in layer after layer of telling moments. When collaboration is first mentioned by his therapist, he looks blank. When questioned about his first wife, he replies, “How could I possibly know what my wife was feeling?” The bemusement is genuine.

Yes, Mood Music is a compelling play, that positively sings with great lines and throws Cat’s raw idealism against Bernard’s manipulative pragmatism. Despite the mess of emotion what comes across strongly is the power of music to inspire both creatives and fans. But although the play is constantly inventive, it does run out of invention towards its end, and the inclusion of an irritating 20-minute interval in a two-hour play definitely results in a pressure drop. Likewise, shouldn’t a story about music have just a bit more, er, music in it? Although the dialogues are a bit circular, with the therapy a bit inconclusive, there is also a sense of repetition, as if the needle occasionally gets stuck in a groove. Still, right at the end, the emotional volume does pick up.

Top director Roger Michell orchestrates a pitch-perfect cast on Hildegard Bechtler’s bare studio set, with its guitars, keyboards, drum kit, chairs, and its quiet cacophony of dangling mics. Ben Chaplin’s charismatic Bernard is all charm and repressed feeling, occasionally boyish, sometimes reptilian, which contrasts beautifully with Seána Kerslake’s more demonstrative, yet equally magnetic, stage presence. She oozes talent, but with visible cracks in her funky facade. As the humanistic therapists and opportunistic lawyers, Jemma Redgrave (Vanessa), Pip Carter (Ramsey) and Kurt Egyiawan (Miles) provide suitably restrained support for the clash of artistic titans, while Neil Stuke (a very hip Seymour) gets a few solo riffs of his own. A powerful journey into the dark heart of music-making—and surely a candidate for best play of the year.

Mood Music is at the Old Vic until June 16.

This article originally appeared in Aleks Sierz on May 2, 2018, and has been reposted with permission.