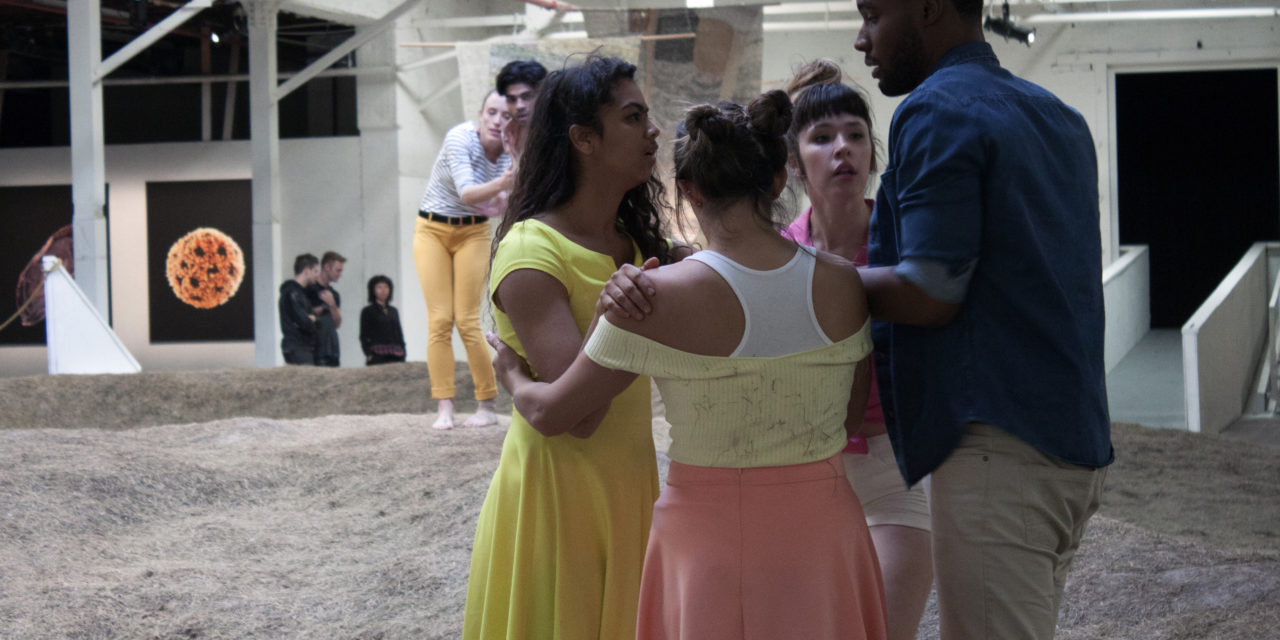 Simply put, anyone who attended The 14th Factory’s afternoon of Interrupted on May 14th, an immersive multimedia performance (opera, dance, theatre, video) produced by Beth Morrison Projects, in Los Angeles within the confines of that exquisitely unique museum environment, cannot have walked away feeling anything other than altered by the experience, if not moved in unexpected ways.  After first traversing a long exterior ramp up into a spacious lobby with a decidedly makeshift feel, we were held back from the entrance into the space until a man dressed in a suit calling himself the ‘White Rabbit’ swung open the incredibly creaky metal door and encouraged the two of us to ‘choose our own adventure.’

Into the darkness we went, accompanied by the jarring scrape and whine of the metal door, which soon gave way to the angelic, otherworldly voice of Jodie Landau – a composer, vocalist and percussionist from Iceland.  Accompanied by harpist Katherine Redlus and percussionist Matt Cook, Jodie was painted in the colors and style that echoed the image of a painting by Simon Birch hung behind him.  Playing one of two xylophones with minimal lighting to capture his movements, Jodie’s voice filled the air like a warm embrace, a soothing hand on your back urging you to let go of any expectations or assumptions.

It was tempting to spend the evening watching him, especially when he played his xylophone with two violin bows, brushing the strings of the bow along the edges of different bars as he sustained notes in harmony or discord.  But given the impact of his performance, it was equally exciting to move on and discover what else the Factory had in store.  It was easy to lose all sense of time moving through the dark spaces that flowed from one installation to the next.  Any internet search reveals the 14th Factory is structured around the concept of the Hero’s Journey, with pieces that reflect each step along the way.  There are moments along that journey that space and the art and the sounds that are heard do in fact inspire the same kinds of emotional reaction the Hero’s Journey inspires.

A highlight of the evening was Gloria Yu’s array of crowns were engulfed in fog provided by Timur who performed Excerpts from 8 Songs for a Mad King – but by the time we arrived in his realm it was after 7:15 pm and we only got to hear the echoes of his final performance and watch him set about packing up his materials.  It had been too easy to linger along the way in rooms where video installations and live performances kept us rooted in place, channeling the energy they were sharing with us, looking at the art from a lively perspective – all of it living in some fashion.

There were other video installations and a stunning outdoor sculpture featuring the fins of several airplanes seeming to float upright in a still pool of water. Outside as DJs played and a few danced freely, one thought recurred over and over again:  how does a place like this exist?  The answer might be that it doesn’t – at least not for long.  The 14th Factory might be too beautiful to live, if the repeated notifications informing all who visited that donations are more than accepted and that it might not last past May are true.  If this is the case, Los Angeles and the art world at large may suffer an unnamable loss. Sure there were aspects of this event that felt entirely disorganized, and yes, of course, those, kinds of things can be challenging given our traditional museum experience where everything is labeled and laid out in a clear and concise manner.

Installations, photographs, and dance performance created a whole, inspiring evening.  After Jodie, we moved into a long dark hallway that ended with The Dormouse – a video installation created by Doug Foster and Simon Birch.  One could almost miss the large-scale photographs on the wall by Wing Shya before heading into Garlands – an open central space with natural lighting, exposed ceilings and most important; a field of grass complete with swings on one side mounted securely to sizable metal bars.  The walls surrounding the grassy open space feature photographs and paintings from other contributing artists at the Factory but on this day the main space was turned into a stage for Leaves of Grass – a movement piece conceived and directed by Annie Saunders featuring three young men and three young women telling a fascinating story in a loop.  The six entered, removed their shoes, took each other in but did not interact openly as a male voice welcomed them to a high school English class and asked them to posit what Walt Whitman’s intention was. 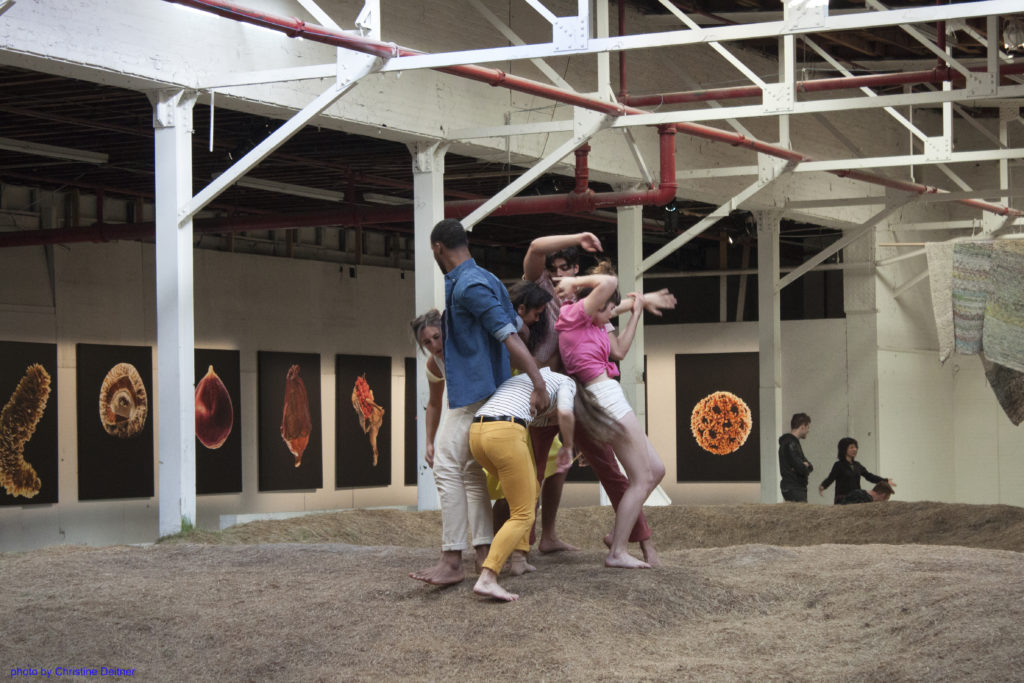 A bell rang, reminiscent of recess long ago, and the six movers each mounted a swing and as a Wes Anderson-esque joyful guitar riff overtook the teacher’s voice – they swung.  The moment their feet left the ground they were transformed into students who escaped the drudgery of a tedious classroom; they found a sweet moment of freedom and release.  Each of the six swung in their own way – one leant back as far as they dared, one kicked their dangling feet as another tried to go higher than the rest.  There was an immediately recognizable humanity in that gesture, and it made one want to smile and cry at the same moment.  The undercurrent of nostalgia for a time that may never have actually existed, both in our lives and in our country mirrors what one might think about Whitman’s work that also inspires nostalgia for ‘simpler’ times or a clearer mindset that was possibly more challenging and less direct than one wants to believe.

It was easy to almost overlook the levitation photos taken by Li Wei and the knitted [what looks like a] giant scarf made out of paper by artist Movana Chen among the other pieces that frames the walls around that grass.  The performers went down a hall that led to the outside world – no backstage area was present to separate them from the rest of us moving past them to use the temporary bathrooms set up outside – and though one could hear their bursts of laughter and discussions about what went well that last time, those moments of humanity only served to make the next viewing of the piece all that more meaningful.

Now it should be noted that by this point in this room, we lose the clear thread regarding which way we were supposed to go.  The program and map we had been handed on the way in were long forgotten and one might have wished momentarily that there had been clearer direction within the space but it’s also true that clear direction most likely would have altered the experience and not the best way.  What sounded like a recording of the Ave Maria on a loop turned out to be Anna Schubert surrounded by candles in a room featuring four or five large video screens all playing Scott Carthy and Simon Birch’s The Brutal House – a slow motion video capture of what one might best describe as a brawl.

Off that room one found another magician doing card tricks as he spoke of alternate universes, the power of real magic in the world and, essentially, the power of possibility.  He had one man pick a number – which was 26 – then asked a woman to hold the second deck of cards in its box as he counted out 26 cards then asked the second man to pick one of those cards, look at it, put it back in the deck.  It was the King of Diamonds.  He then asked the woman to give take out the second deck and counted 26 cards to get to – the King of Diamonds.  It was the picture of showmanship at work, people.  Leaving that room with the magician’s talk of magic being real and alternate universes being inevitable we entered another large dark room featuring five or six large screens that were momentarily on the fritz.  A Factory employee got them all back on but that moment of waiting afforded one a moment to recognize that each room seemed to be constructed with the goal of having negative space at all costs.

How often are we invited to experience art that is so thoughtfully intertwined with live performances in this manner?  How often are we invited to ‘choose our own adventure’ with artists on this level?  The answer is almost too depressing to express.  One should hope that the 14th Factory doesn’t meet its untimely end in less than three weeks – if only based on the hope that event producers with an ability to truly get the word out might do something like this again soon.  Just in case – escape to the Factory while you can. 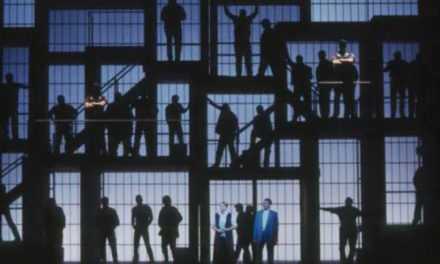 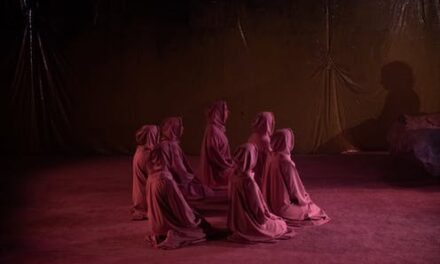