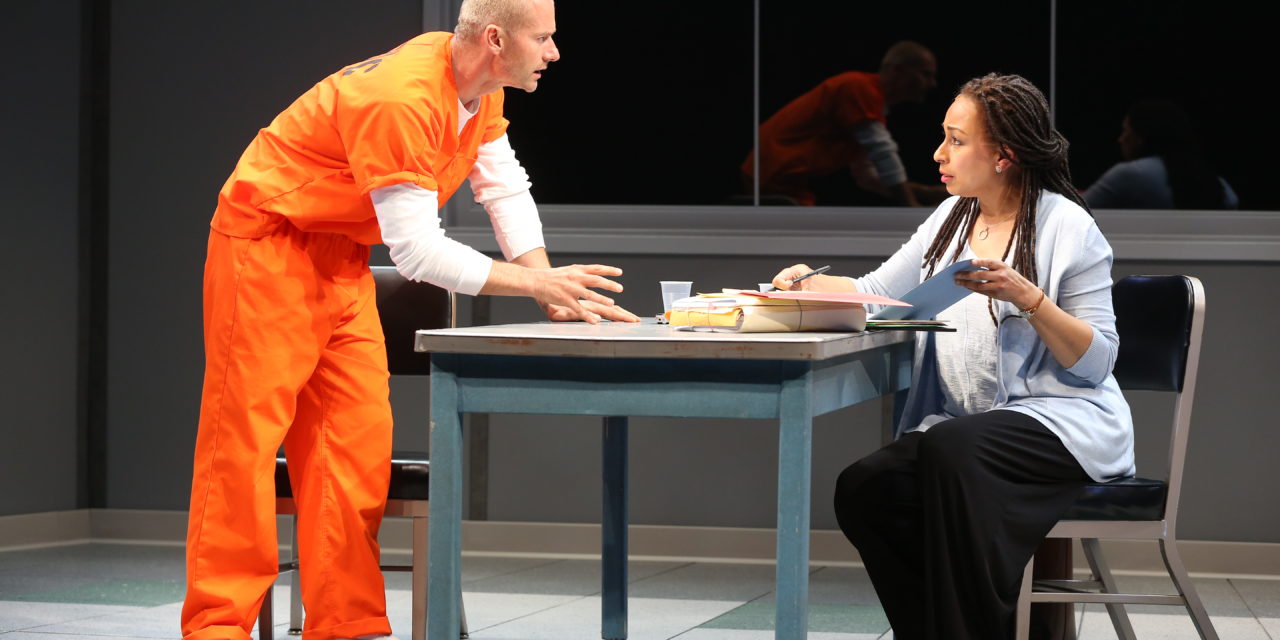 From the dimming lights at the top of the play to their final fade 90 minutes later, Building The Wall scarcely wavers from its intention to confront the nascent crisis of the Trump administration.

An era-defining work which may well prove to be one of Robert Schenkkan’s most famous, Building The Wall is the play of the moment, capturing with steely precision the sense of collective dread marring the nation under President Trump. Astutely eluding all but a few mentions of Trump’s name, this bracing play cuts (with razor-like precision) through the confusion of the times by presenting a dystopian future merely two years hence. In this chilling scenario, we find two characters discussing, confronting and confiding in raw, bracing terms the circumstances surrounding a new-fangled internment camp where thousands of minorities were evidently held and exterminated.

The production, in the cosy bowels of New World Stages, consists of a single set, that of a secure interrogation room. Here, one condemned prisoner, played by James Badge Dale, has consented to be interviewed by an academic, played by Tamara Tunie, the latter sporting a thick, elastic-bound folder. The set is stark and astringent and the props and other embellishments kept to a spare minimum. Gratefully, the two actors expertly command the stage in roles requiring powerful emotions and keen listening skills. Both actors are gifted monologues of gripping detail which are amongst the highlights of a taut evening.

No one enters or leaves the room, leaving the evocative lighting and sound to help navigate the plot’s shifts in mood and tone. During a harrowing monologue by Dale’s prisoner Rick, the lights turn dark and green; later, they become blue, to indicate another pivotal scene in the play.

The language, tight and precise like a musical score, is handled with a surgeon’s care by Dale and Tunie, two actors who work together like a single mind. While her emotional range encompasses shock, horror and other expansive emotions, he’s left to a more prescribed range which he nonetheless maneuvers seamlessly.

The topical nature of the play evokes the legacy of politically charged theatre such as Arthur Miller’s The Crucible and Tony Kushner’s Angels In America. With Building The Wall, Schenkkan has staked a claim as the first major playwright to take the nation’s current political temperature, offering up the sort of fresh-off-the-press topicality which requires a singular boldness and determination. Like Miller, Schenkkan has filtered a political crisis through a customized magnifying glass; in this case, the near future. The slight jump ahead in time enables the audience a panorama through which they are afforded an objectivity currently lacking in the political rollercoaster ride of the now.

Given the current state of the nation and these turbulent times, it’s challenging to gauge just how successful this gambit will prove for Schenkkan, a Pulitzer Prize and Tony Award winner. It may take time to assess how successful was this excursion into the speculative political theater arena. It’s possible that this is the play of the moment which may be deemed essential theatre. For now, this is a play utterly of its time, our time, a play which should be seen far and wide.

Building The Wall is playing at New World Stages at 340 W 50th St in New York City through July 9. 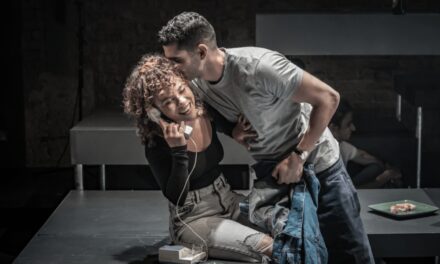