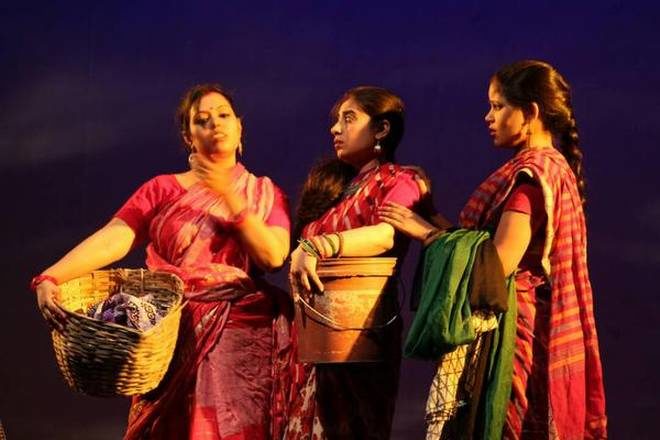 Neelesh Kumar Deepak’s “Malah Toli” is a gripping portrayal of the struggle of three women against feudal oppression. Press photo

The play Malah Toli, which was presented last month by Hindi Rangbhoomi at Shri Ram Centre this past week, projects the portraits of three women fundamentally different in social outlook yet having one thing in common — indomitable will to struggle against social taboos and feudal oppression. The delineation of characters, the depiction of social milieu inhabited by fishermen and the folk music rendered by singers with heartfelt intensity create a theatrical piece that grips the attention of the audience.

A stage version of the short story by Rajkamal Chaudhary (1929-1967), poet, short story writer and novelist, who wrote prolifically in Maithili and Hindi, was vastly admired and remembered as a ‘veritable cult figure.’ The original story written in Maithili was translated into Hindi by Devshanker Navin and adapted by Suman Kumar, senior writer, director and actor. It is directed by Neelesh Kumar Deepak, a young theatre artist who believes that theatre art needs sincere involvement and passion and is credited with having worked with eminent theatre directors.

As the curtain rises, we watch two friends who are fishermen, expressing their unbroken friendly ties. Despite their struggle for survival, they vibrate with youthful energy, enjoying themselves. They are in love with the river, their boats and their skill to catch fish. One of the friends Chanra marries his sweetheart Piritiya, a young vivacious girl. After a week of their marriage, Chanra’s friend Mahantha organises a party to celebrate the marriage. After drinking heavily and eating lots of fried fish, Mahantha is possessed with the sensuous beauty of Piritiya and rapes her. Chanra offers a weak resistance to the devilish design of his friend. As Mahantha leaves the place after committing the sordid act, Piritiya follows him, shouting at the top of her voice, addressing her husband, “You are a detestable eunuch. Though Mahantha is a monster, I am going with him.” Her voice is full of anger, hate and protest, walking as if she were in frenzy.

Abruptly, the focus shifts to Kamli, a wanton woman, she shares drinks with men and enjoys herself to be in the company of promiscuous men but she is a woman of strong will and always ready to help out those in need of assistance.

Then another woman, Ketki, enters the scene. She once lived in a city with her husband who is paralytic patient now and has returned with him to her village. Known to the villagers as a refined woman who is elegantly dressed, she looks after her bed-ridden husband with devotion and within her limited means, she does it all with the skill of a trained nurse.

Beautiful, young and well dressed, she becomes the object of men’s attention. The village head uses his money and muscle power to make her his mistress. Having miserably failed in his efforts to seduce her, one night he enters her house with a dagger. Camouflaging as a willing partner in the act of seduction, she gets hold of the dagger of the village head and kills him to save her honour.

There is a minor subplot that deals with the abysmally poor fisherman’s struggle to collect enough money to get his son bitten by a deadly poisonous snake treated by a greedy and heartless doctor.

The director has aptly designed his production which captures the milieu of fishermen’s village with a river flowing in the background. To project the right emotional colour and mood the director has used the folk music of Bihar ranging from Bideshiya, Baramasa and Chaiti. “Starin Hayya! Hayya” tends to be the theme song to reflect the struggle of the fishermen to confront their daunting problems. The music score is by Sanjay Jha and Ramesh Mallik.

However, the production tends to be disjointed with hardly any thread to join different thematic strands. By incorporating elements from Brechtian theatre to comment on social criticism, a semblance of harmony could have achieved.

Jaismeen Kaur as Piritiya imparts vitality and intense emotional power to her portrait. Priya Sahu as Kamli acts creditably while Pragya Jha as Ketki acts convincingly. Ghulam Hussain Rijvi as Mahantha brings out to the fore the brutality and villainy of a strong man in drunken condition raping the newly-wed wife of his dear friend.

This article was originally posted at Hindu.com Reposted with permission. To read the original article, click here. 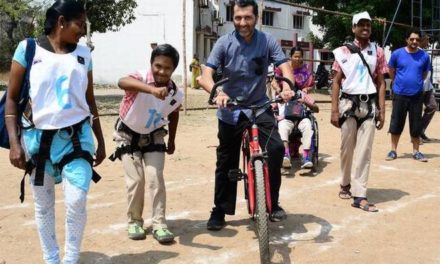