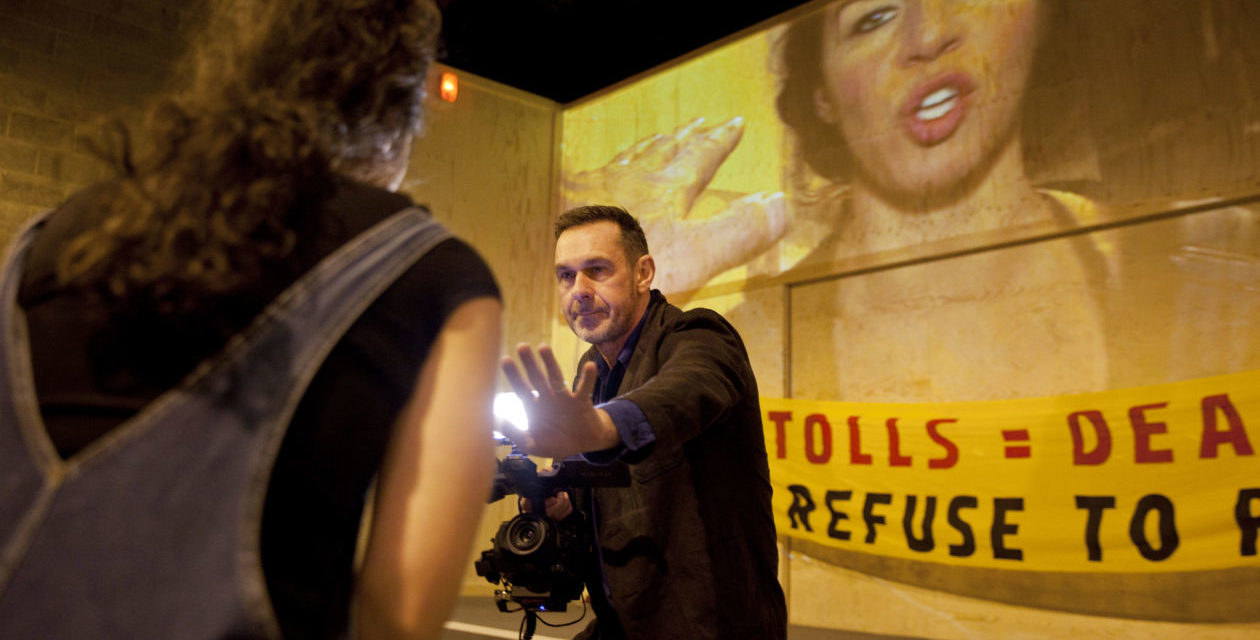 Paul Mason has been expanding his portfolio of late. The former economics editor of Channel 4 News and BBC Newsnight and latterly an outspoken campaigner/ guru for Jeremy Corbyn and the hard left, has now become a man of the theatre.

Recently, his play, Divine Chaos of Starry Things, based on the life of the 19th century French revolutionary Louise Michel, had its premiere at London’s White Bear Theatre. In March, he made his stage debut as the star, writer and director of Why It’s Kicking Off Everywhere, a theatrical adaptation of his 2011 book, which he updated and expanded in 2013.

The show had just four, free, shows at the Young Vic, the last of which was filmed by BBC2 for broadcast on 6 May; reviews, inexplicably, were embargoed until after the run had ended. Its subject matter is protest and revolution.

Over the course of around an hour, Mason narrates and explores his first-hand experiences of revolt, from 2011’s uprising in Cairo’s Tahrir Square to Madrid and the Occupy Wall Street protest; from Istanbul in 2013, to the rise of Syriza in Greece in 2015, right up to the triumph of Trump last year. Three actors – Khalid Abdalla, Sirine Saba and Lara Sawalha – play the various protesters Mason met along the way.

How did all of that hope, mass movement and protest bring us here, to the “global car crash” in which we now find ourselves? While never actually answering the question, it’s quite well done.

Mason is a charismatic, knowledgeable host in denim shirt and brown linen jacket, whose zeal for telling a human story shines through. He sensibly steers clear of talking about British politics – the London riots, the rise of Corbyn, and Brexit; this is Mason as reporter, not Messiah and all the better for it. 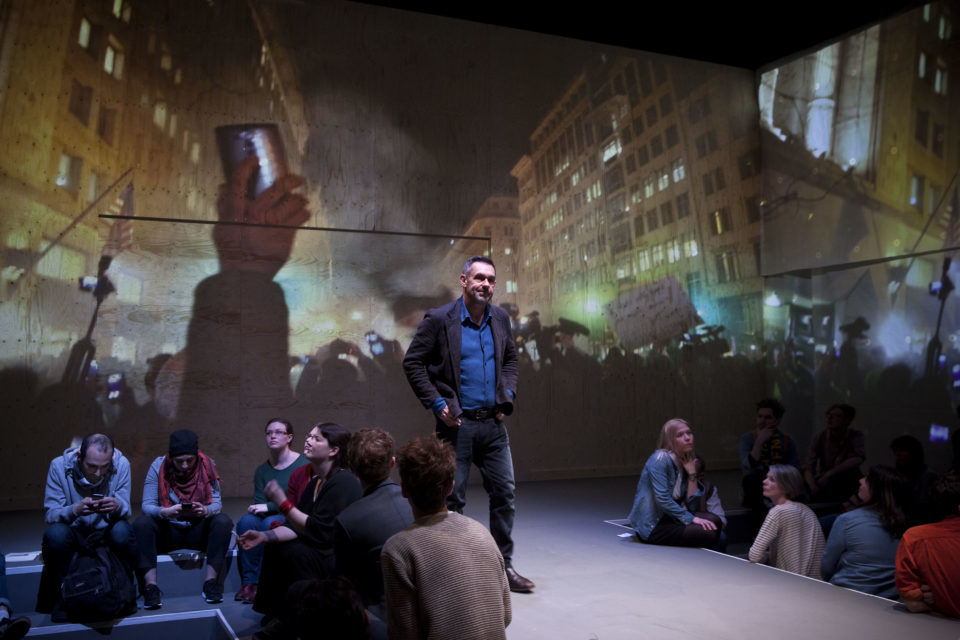 Why It’s Kicking Off Everywhere by Paul Mason 28 – 30 March 2017 at the Young Vic in London. Photo: David Sandison

There are fascinating details from the “front line” – about the “human microphone” technique of communicating at the Occupy camp, how the Athens protests proceeded strictly along the ancient rules of the city, and technology’s role in changing the narrative. David Lan’s production makes whizzy use of technology to project real newsreel footage of protests onto the surrounding walls. It never quite feels as immersive as it might, given that Mason is clearly aiming for audiences to feel that occupying the theatre is in itself a political act.

The audience is warned beforehand that participation is a “key part” of the production, but in the event, this amounts to little more than having to sit around the edges of the stage as the performers weave in and out, and joining in with three chants – one in Arabic, one in Turkish, one in English – which are taught, exhaustively, beforehand. Where shows like Counting Sheep – about the Maidan protest – viscerally capture the thrill and fear of protest by forcing audiences to get involved, this is on the one-man lecture side of theatre as protest. “Other voices are available,” as Mason says at the end.

The show is followed by a very earnest half-hour audience discussion about the nature revolution, which, to my mind, diminished the power of the narrative and images that went before. It might have been more in keeping to let the debate spill out into the bar and onto the streets instead.

This article was originally posted at https://inews.co.uk. Reposted with permission. To read the original article, click here.