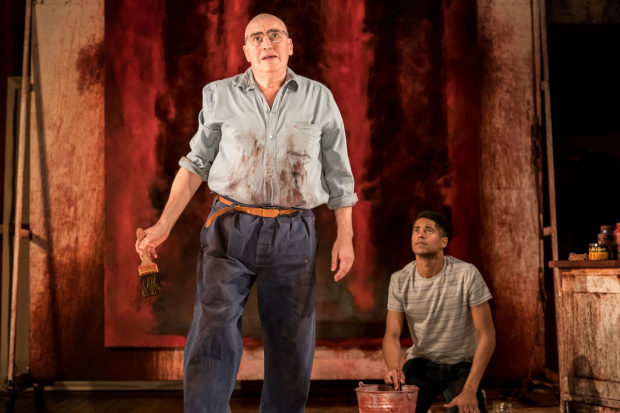 When looking forward to seeing a work of art, a certain play or a performance what is our feeling like? For me, it is, first of all,  a sense of an anticipation. The anticipation of discovery,  an insight I have never had before,—a revelation of some sort! When frustrated, this expectation ends up in disappointment. Trying to avoid it,  I prepared not to expect too much of it. I was wrong. John Logan’s play Red about abstract expressionist Mark Rothko, staged by Michael Grandage, surpassed my expectations.

On the face of it, it is a relatively short production (just over an hour, no interval) with only two actors debating about art in an austere paint-spattered studio. However, it compensates for austerity with its emotional and intellectual intensity. First, we encounter the painter Mark Rothko (brilliantly and subtly portrayed by Alfred Molina) who is immediately joined by Ken (Alfred Enoch), an over-eager, starry-eyed, self-effacing art student hired as Rothko’s assistant. Although Ken is purely fictional, he is a generalized character who may stand for anyone fresh to the art world. His task is to mix paints, stretch canvases, fetch takeaway and coffee, pander to Rothko’s every whim and know when to stand back and keep silent.

The story is set in New York in 1957.  Rothko is already a living classic; he is at the peak of his powers and has just taken up on a major (and very lucrative) commission to paint the murals for the swanky new Four Seasons restaurant in Seagram building, designed by Mies van der Rohe and Philip Johnson. And yet, Rothko feels anxious. With Jackson Pollock dead, abstract expressionism becoming passé and Pop Art proclaimed as a new trend, he views himself as “a dinosaur,” an extinct species of an artist. The public seeks entertainment rather than the opportunity to grasp the foundations of existence. So, he welcomes his new assistant with hope mingled with skepticism. The play, is, in essence, a dialogue between these two protagonists. Their impassioned debates revolve around art (the red and black colors of Rothko’s paintings standing for symbols of life and death) and what Dostoyevsky dubbed the “accursed questions of existence.” Although the matter is serious and even tragic, the sublime goes side by side with the comical, discharging the intensity of emotion.

In any case, prepare to be grilled on philosophical and metaphysical issues, as poor Ken is. As soon as he arrives into the studio, he is confronted with an engulfing huge painting in red. “What do you see?” demands the maitre. “Red,” gasps out the assistance, helplessly.  And this is how Rothko sets about pontificating on art.  The whole play revolves around these two protagonists and what they represent, not just the Seagram Four Seasons commission, although technically, this is the plot.  The main message is not about the dangers of becoming a sellout self-deluded artist trapped by hopes for success; or about celebrity status, fame and wealth versus the maxim that the true “artist should starve.” Its focus is not on artist’s concern for his legacy and place in art history (although this anxiety plagues many an artist in their old age), or on being protective towards his works by ensuring they are displayed in the right setting. The issue goes far deeper than that: is art powerful enough to transform the world or is it just a fragile ornament?  Gradually, the debate takes on existential overtones: will life triumph over death, harmony prevail over chaos, light conquer darkness and red overpower black?  Entropy or negentropy, Dionysus or Apollo? 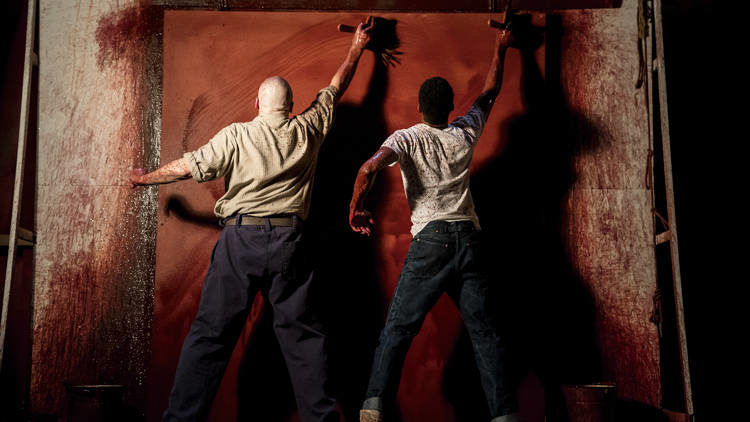 Alfered Molina as Mark Rothko and Alfred Enoch as Ken

The tormented artist struggles to find answers to these questions, and it becomes the task of his whole life. And death. Although the play does not touch upon his final years, it still discusses the issue when Rothko and Ken talk about Jackson Pollock’s suicide, which for Rothko becomes an excuse to talk of his own possible suicide. “One day the black will swallow the red,” concludes the artist.  The set also hints to Rothko’s last commission: we know that the artist had a mechanism with pulleys for his canvases in 1964 when he moved into his last New York studio to work on the monumental Rothko Chapel murals. Suffering from health problems and lacking the physical strength to paint large canvases on his own, Rothko for the first time hired two assistants. They were supposed to help him apply the chestnut-brown paint in quick strokes. Isn’t it what the play’s allegedly “most iconic scene” refers to when Rothko and Ken prime a huge canvas with a rusty blood-colored chestnut? The intense physicality of the effort also gives a hint to the agonies, tormenting Rothko’s soul.

It is interesting how the relationship between the two protagonists evolves, probably harking back to Rothko’s student years at Parsons The New School for Design, where he was taught by an Armenian-American avant-garde artist Arshile Gorky who died by committing a suicide. Rothko reminisced about Gorky’s domineering nature and classes “overcharged with supervision.” However, this is exactly the way he interacts with Ken!  In the similar way they grow apart: Rothko holds on to the ideas of mystical, tragic, complex art and Ken embraces the ideas of Pop Art that Rothko considers vapid. Engrossed into his art, Rothko puts up a psychological barrier when communicating with his assistant. He does not seem to have any human emotions or sense of attachment, although he genuinely craves for human sympathy and attention, for someone he can share his thoughts with. Beneath this façade of distant disengagement, we perceive an anxious, fearful, worried, and vulnerable person who still struggles with his Russian Jewish past and his strong emotions. Ken manages to reach beyond his protective shell, and no matter how Rothko tries to conceal this, his great humanity, and perhaps, a former idealist anarchist he used to be in his youth, eventually resurface, splendidly captured by Molina’s characterization. The young assistant grows into an independent artistic personality, reaches out to Rothko, destroys his illusions and prompts him to withdraw from the Seagram commission project. It is a fruitful clash of two opposing views on art represented by each character.  Is this the moment when the assistant becomes an opponent, a rival? Does it also refer to the fact when Rothko was a spokesman for surrealism and then later, to abstract expressionism against the cubism? Then came his turn to be toppled over from his pedestal. 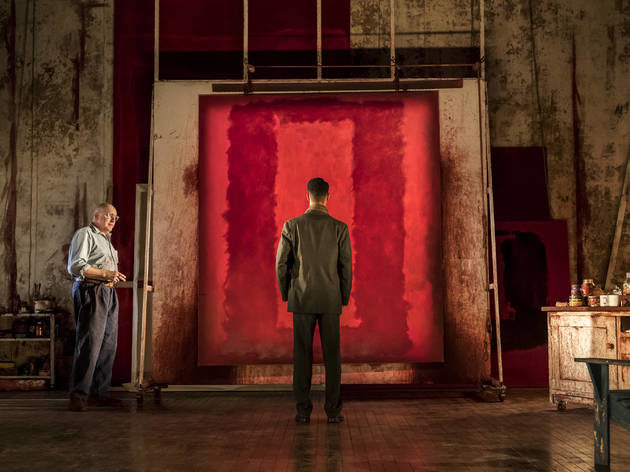 Alfered Molina as Mark Rothko and Alfred Enoch as Ken

Whatever is the answer, the associations, emotions, and thoughts the play stirs in the process, are very potent. Their long-lasting effect is not only due to the actors’ impressive delivery but also to the work of the set and costume designer Christopher Oram, the lighting by Neil Austin, and sound by Adam Cork. With their concerted efforts they produce an indivisible unity of word and image. The visual and intellectual impact of this stage production is truly long-lasting.

“I think of my pictures as dramas, the presentation of this drama in the familiar world was never possible, unless everyday acts belonged to a ritual accepted as referring to a transcendent realm”–Rothko once stated.

He also maintained that “the most important tool the artist fashions through constant practice is faith in his ability to produce miracles when they are needed. Pictures must be miraculous.”

Therefore, the concluding scene in the play features the painting with black and red blocks of color pulsating in the darkening light and impressing itself upon the viewer’s mind: the potent image always goes beyond words, straight to the realm of the transcendent and timeless, to the ever powerful red.

This article originally appeared in Russian Art and Culture on July 14, 2018, and has been reposted with permission.