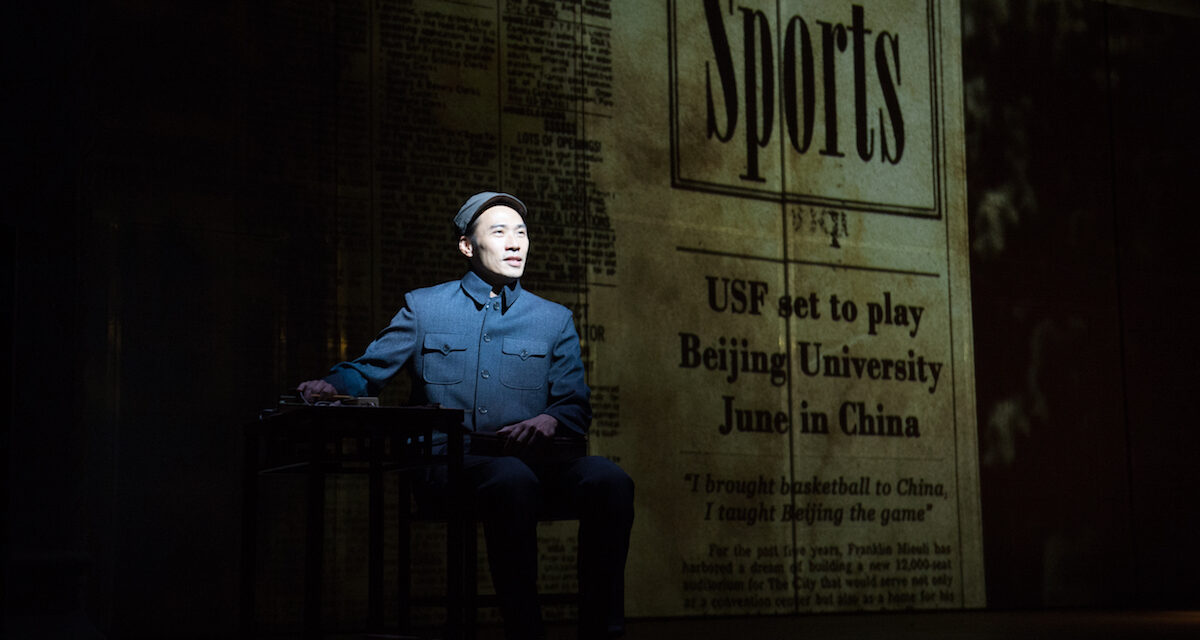 Wen Chang: It was such an American way of thinking.

Pasadena Playhouse collaborates with East West Players to deliver a visual feast with some deeply emotional surprises in The Great Leap, written by Lauren Yee and directed by BD Wong. BD Wong performed the role of Wen Chang (one of the play’s four main characters) in two previous productions of the play and the intimate knowledge that kind of experience inevitably brings seems to have informed the work, to the benefit of all. As the State Theater of California, Pasadena Playhouse has a history that reaches back to the early 20th century. East West Players was established in 1965 and is our nation’s leading Asian American theatre company with a history of premiering hundreds of plays and musicals while cultivating an audience that is over 70% of people of color. Their mission is clear, and that is what makes their collaboration with Pasadena Playhouse and BD Wong an exciting one. 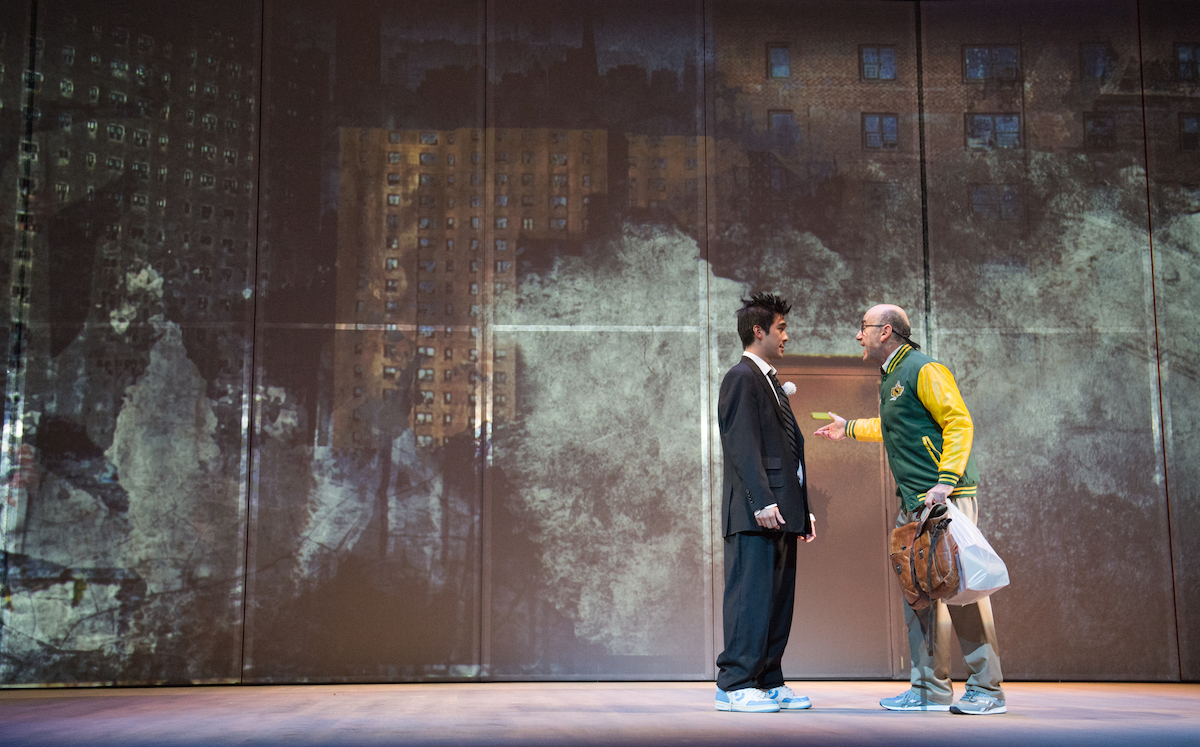 James Eckhouse and Justin Chien in The Great Leap. Photo by Jenny Graham.

The play begins in the summer of 1989 where we meet Chinese basketball coach Wen Chang as he looks back to the summer of 1971 via his ever-present tape recorder. That recorder captures the voice of Saul, an American basketball coach whose visit to China significantly changes Wen Chang’s life in more ways than one. In 1971, Saul seems to have been a big man on the court, driving practice and pushing Wen Chang to embrace the less than sportsmanlike aspects of the game. In 1989, Saul coaches a failing team, has only the slimmest connection to his young daughter after his divorce and faces a dim future overall. When he left China in 1971 he returned home, declaring no Chinese basketball team could ever defeat an American one. The Communist Party and Wen Chang have never forgotten that statement and that has driven them to invite Saul back to China for what the semi-desperate coach presumes will be an easy win. 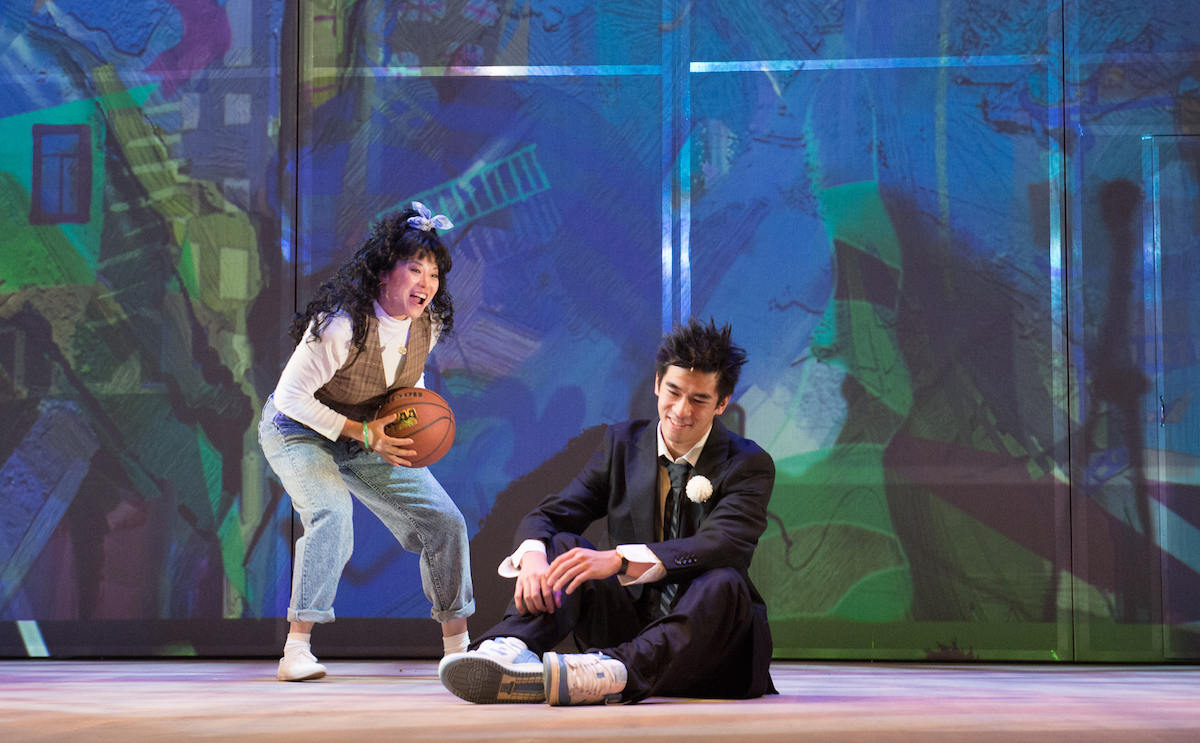 Christine Lin and Justin Chien in The Great Leap. Photo by Jenny Graham.

Enter Manford, a high school student who boasts of his prowess on the court in Chinatown who all but demands Saul take him to China with his team as he points out each of the college players’ flaws.  Manford is extremely driven to land this opportunity, willing to push his own limits to impress the coach, but his need isn’t purely connected to his desire to shine on the court. Manford has recently lost his mother (we meet him in the suit he wears to her funeral) and lives with a friend he refers to as his cousin, Connie (we learn later that their relationship is based more on the chosen family kind than the one related to bloodlines). Connie gets Manford, is protective of him, and does what she can to be sure he will be safe as he pushes Saul to give him a shot on the team (it should be noted that Saul actually really needs him – Manford is good).  Four actors bring the story to life with the aid of some refreshingly creative and sometimes almost distracting (because they are so strong) video projections (designed by Hana Sooyeon Kim – an artist to keep an eye out for).

As Saul, James Eckhouse endows Saul with such a crusty hard shell made up of often hilarious streams of foul language that the actor seems to relish one thousand percent. As humorous as his exchanges with the other characters can be, that shell of his seems almost impenetrable and that makes us wonder, over time, where the cracks are that allow him to take Manford in. One has to admit that as Manford, Justin Chien delivers a performance that sneaks up on you and steals your heart entirely. He is earnest, committed, and willful enough to mask the desperate need he has for this chance in ways that make you root for him right away, even if the play doesn’t necessarily help us understand what is at stake for him here. He has just come from his mother’s funeral – in fact, we learn that he left it early in order to meet with Saul and beg to be part of his China-bound basketball team – and yet there is no sense of loss at all in the first beats when we meet him. It’s easy to assume that he had no relationship with his mother until we later learn that she must have known him his whole life later in the play. Perhaps there’s a cultural disconnect implied but Manford is extremely American in every way so that doesn’t seem to be what the play is aiming for.

As Manfred’s unofficial cousin and biggest fan, Christine Lin infuses Connie with a practicality that doesn’t end up dimming her desire to see Manford break out of his possibly self-imposed rut to face his insecurities and finally (ultimately) connect with his parents in ways that director Wong does a solid job of masking until the emotional reveals are necessary, always favoring the humor over the darkness. That said, Connie doesn’t have much to do in the play save to serve as a kind of messenger/exposition delivery system. Connie spent time in China as an exchange student and she ends up being the one who understands what Saul is up against the best but she has no goals of her own. She gets to deliver one of the most delightful exposition moments via a phone call to Manford in China in a moment of crisis that reveals a lot about his mother he never realized. Conversely, she also delivers some lines that sound more like the playwright plucking the ‘idea’ string, as when she notes they are “All crowded around our tv waiting to see what forty years in the dark does to a country.” 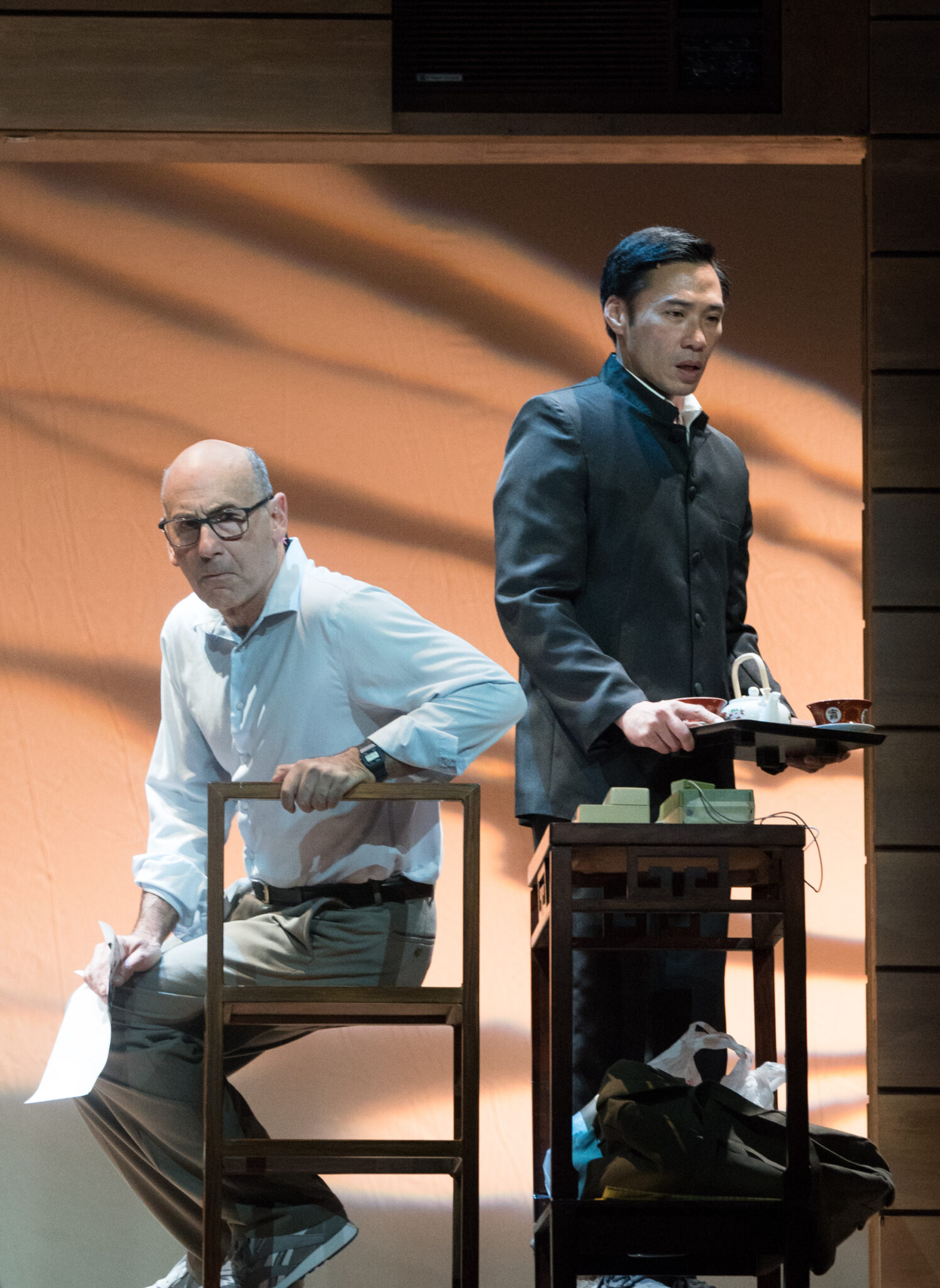 As enthusiastic and strong as his fellow actors are it is Grant Chang who utterly shines as Wen Chang; a character he brings to vivid life with humor, clarity of action, and a depth of emotion that took me by surprise. BD Wong and Chang have shaped a journey that is completely engaging and it is exciting to watch it unfold. With his tape recorder in hand, the use of video projections that lend a layer of ‘big brother watching’ to the play (while also standing in for elaborate scenic changes that could not otherwise have been accomplished), Chang delivers a performance that will surprise you. He morphs from something of a naive young man into a bureaucrat who has come to terms with his choices. He has personal experience that tells him Americans feel it is ‘always your turn’ and yet has never found the courage to take his. He knows Saul will expect his team to be short in height and therefore easy to beat so instead he seeks out the tallest Chinese players he can find and uses Saul’s drills to hone them into a machine that is ready to rip Saul’s team apart. He might not have been able to stand up and take his turn, but Wen Chang is not willing to give Saul an easy out.

Maybe it was the pacing, maybe it was the energy the night I saw the play, but Wen Chang says something I wished he had a bit more time to resonate with: “I had been waiting for things my whole life”. Each character could say that with equal weight. Saul has been waiting for a reason to feel special, Connie has been waiting for the moment when Manford might come into his own. Manford has been waiting for the day when he could feel a connection to a mother and a country he seems to have barely known. Wen Chang was waiting for the day when it would be his turn. Saul is responsible for the job he has, coaching his team. It was not a job he sought out. “Growing up,”, he says, “you did not want to be someone. You wanted to be the person three people behind someone because being someone could get you killed.” Considering what he learns over the course of the play, one might argue that being no one doesn’t serve him much better. 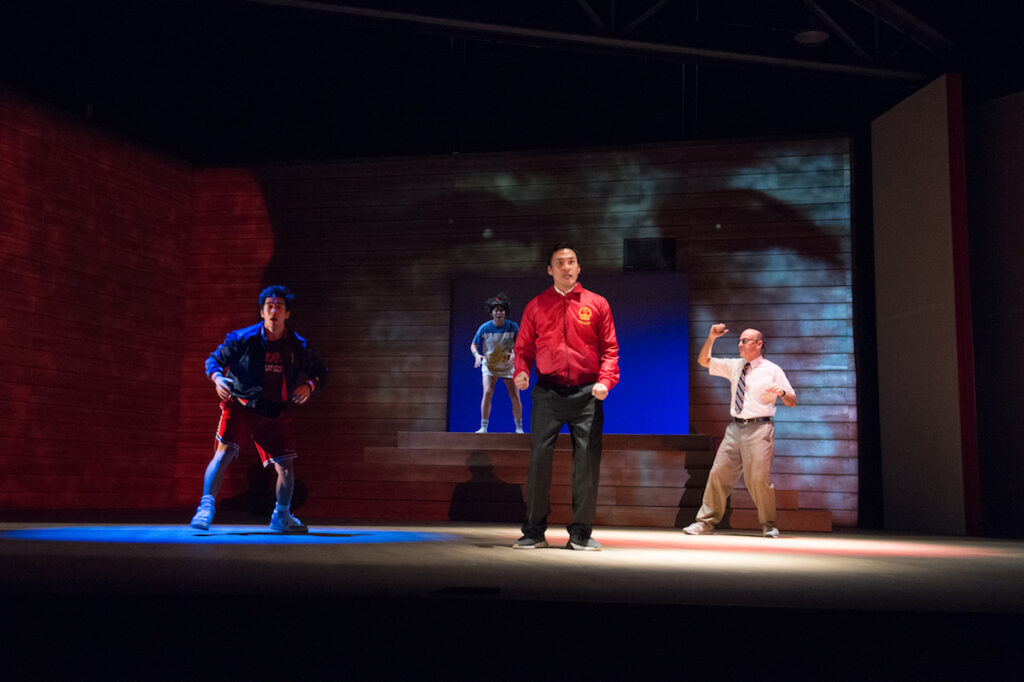 Before the play is over, we wrestle with text-related questions. Why didn’t Manford try harder to communicate with his mother and what does her loss mean? Saul seems to easily ignore a phone call from his daughter when the possibility of a star player joining his team gives him hope of a brighter future but what does that say about the man? How does he do all he does in China to try to help Manford if he’s that self-centered? Connie had been to China already and is connected to people there; why couldn’t she have been of more use? Why couldn’t she have gone with them? It’s hard not to think about the Houston Rockets GM’s Daryl Morey’s tweet, even if it might be impossible via the play’s timeline to hint at our knowledge of that event. As Wen Chang says, in a moment that inspired an audible reaction out of the audience, “Our memories are as conveniently short as they need to be.”  If we focus on Wen Chang’s journey, we can tune out the questions, for the most part. If we lean into the fact that he learned English from a recording of A Tale of Two Cities, explains to us that it is a story about a man who sacrifices everything for the woman he loves, and ends up acknowledging his feelings for Manford’s mother in a way that I did not see coming at all, we can live with them.

When Wen Chang makes his choice he knows, as he says; “This is China. Everyone is always watching.” It would be easy from a Western perspective where we have never lived with this reality to diminish the impact of that (though one might argue, big brother is watching us online all the time) but this performance makes the reality of Wen Chang’s situation a personal thing and that sweeps you up in an emotional wave that is surprisingly painful and startling before the end. If you’re lucky, you’ll let yourself feel it because it is a rare bit of theatrical beauty that BD Wong has crafted with his actors.  Any questions, confusing beats, visual overload or the like is lost in a final visual moment that might have been stronger if the actor were not replaced with a still image that everyone should recognize (if you do not, you need to look into Tiananmen Square, June 4, 1989, right now). “My whole life”, he says, “I had been taught that it was not my moment. But now I see:  It has always been my turn.” 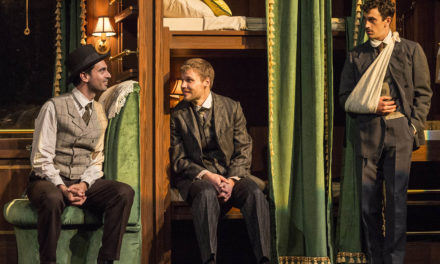 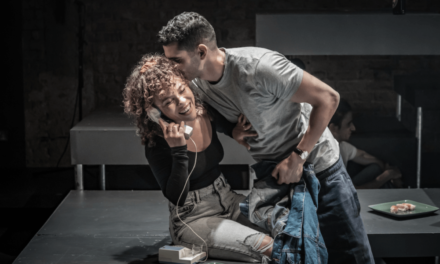 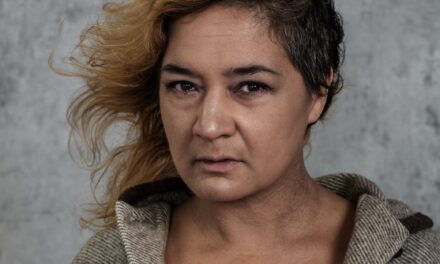