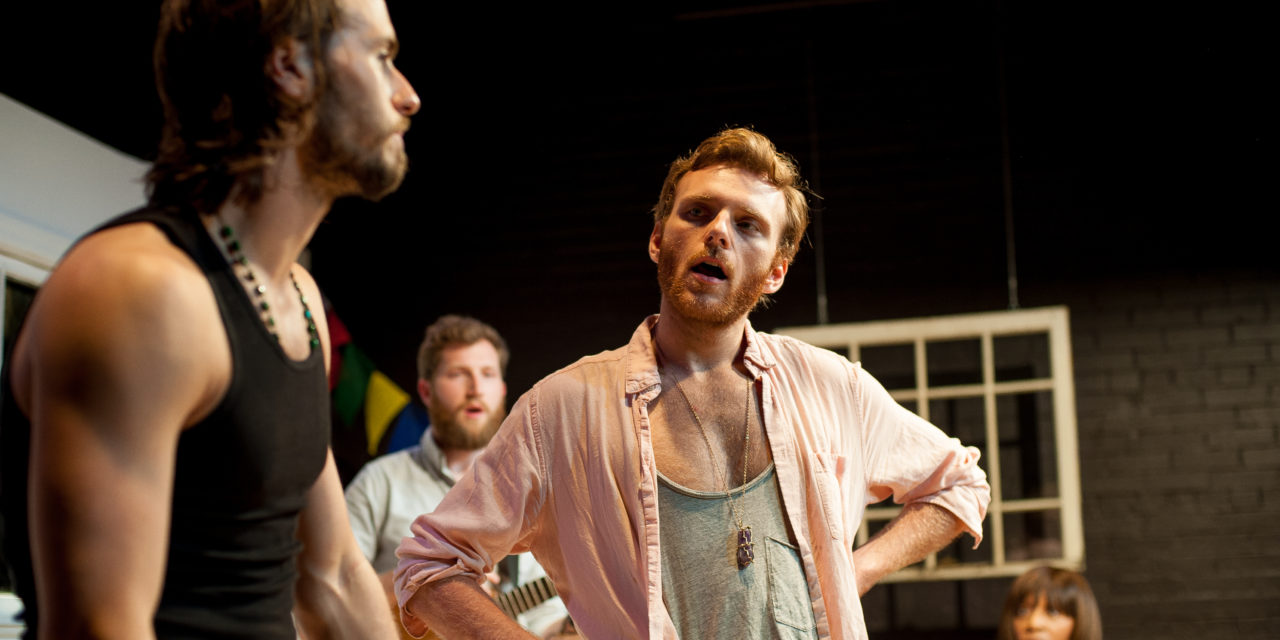 Connor Dylan, Nathaniel Mason, Shane Allen, and Patryce Williams on the set of "The Hungry Ghosts." Photo by teafortwophotography.com.

Core Artists Ensemble brings Tessa Borbridge’s The Hungry Ghosts to The Barrow Group Theatre this fall, a “comedy about addiction” that delves into several angles of the current American opioid epidemic. Director Rachel Casparian doubles as set designer; in this case, the combination makes for a cohesive creative vision. Set in a posh Malibu rehab facility, the room has an appropriately new-age-y feel, and the desired vibe is instantly communicated. Sharp attention to detail, such as sand surrounding the stage platform posts and rolled cigarettes instead of boxed, was a cue that this performance would offer careful inquiry to its difficult theme.

Character-as-symbol was bound to be unavoidable with only a four-person cast to represent an affliction that is unrestricted by any classifiable category, demographic or otherwise. At times, the types could feel heavy-handed, though never hyperbolic. Borbridge manages to navigate a number of charged edges, where assumptions are challenged with a thoughtfulness that reaches far beyond manipulation of plot for drama’s sake.

Connor Dylan, playing Chase, brings a nuance to the “badass type” that reads beautifully on stage. As a result, every shifting shadow of Chase’s arc is noticed and appreciated. Shane Allen (as Dalton, the resident flamboyant gay man) carries a high-energy, expressive range. He gives full justice to a smartly-written scene about the nature of relationships, one of the play’s most powerful highlights. Erika, played by Patryce Williams, holds the dual charge of only woman and only person of color in the cast. Her movement from apologetic pragmatism to compelling highs and lows is effortless. A foil to the three patients, Nathaniel Mason keeps counselor Danny’s character muted, as though curating the direction of energies and holding a mirror to magnify them for us to see.

The performance is awash with an audiovisual, metaphoric use of the element of water—primed for intellectuals and students of theatre to analyze. I won’t indulge, here, but am certain that others will enjoy doing so. Additionally, there is an unpacking of the language used in conversations about addiction and mental illness, not shying from the criminality applied by the legal system and the immorality implied by the health system. Through blunt exchanges between those directly affected, confusion and questions multiply.

Politeness is set aside by virtue of circumstance, thereby establishing the perfect conditions for confrontations to singe raw nerves. We get the extremes of physicality promised by the rehab setup, complete with guilt trips and panic attacks: from withdrawn and obstinate to laughing, vomiting, crying. The therapeutic setting provides a veneer of safety, then sardonically wrinkles the logic of the same support system, which is inlaid with contradictions. Considering the potentially dire consequences of missteps in this environment, comedy proves the unlikely but welcome guide down from more than one ledge.

Somehow, the patients are able to employ rationality and compassion for each other’s predicaments, while application of these traits to their personal truths remains elusive. They instinctively jump to aid one another during flares of crisis, demonstrating exceptional capacity for kindness. Then, as though unaware of their altruism, they immediately revert to self-loathing as soon as the chaos settles. But the audience has witnessed their noble impulses—usually masked by layers of maladaptive behavior—prompting a reflective consideration and heightened sense of humanity.

The definitive, swelling moment of healing manifests in the form of an impromptu song, where the players are uncharacteristically, fleetingly, free. It highlights especially the spectacular vocal talent of Patryce Williams. My reaction was simply: theatre exists for exactly this reason, to be utterly moved at this level.

Self-described as “full-length one-act” with no intermission, the intelligence behind this structural arrangement sunk it at the play’s close. Pacing is slow for the duration, with surges, then rests of open space—a keen simulation of the way time can be warped in an institutionalized setting. Borbridge’s final spin on the expectations of the form registers as a playwright’s wink, a reinforcement of The Hungry Ghosts’ focus on staying in the moment.

With the abrupt ending comes the reminder that we’ve only just dropped in on a small landing of the characters’ lifelong reckoning with the side effects of their addictions. For all the joking and posturing involved, one left a bit dazed by the interspersed layers of emotional depth, and with a lingering compassion for the long journey of those afflicted.

First published by The Atticus Review on September 15, 2017. Reposted with permission. 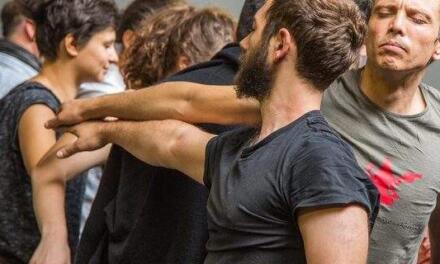 Independent Theatre in Romania: “You Can’t Change the System from the Inside”