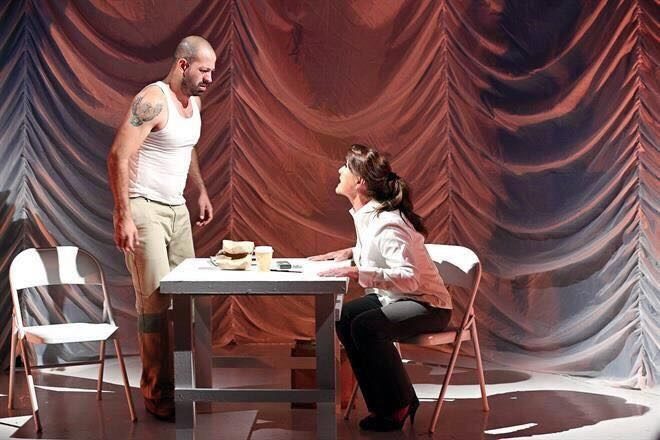 Leticia Huijara's "When There Were Grenades in November" at Casa Musa. Photo: Erick Hinojosa

Leticia Huijara’s theatrical piece When There Were Grenades In November is being presented at Casa Musa, in Monterrey, Nuevo León, Mexico, under the direction of Carlos Gueta and with the hilarious performances of Vicky de la Piedra and Ivancho Esquivel. This play won the dramaturgy prize “Víctor Hugo Rascón Banda” in 2014.

This magnificent “mise-en-scene” gives us a glance of one of the most painful criminal realities in Mexico’s present-days: kidnapping, the practice of organized crime that has caused many families to experience harrowing situations and also shows a symptom of the political, economic, social, and cultural problems of our country. Where we can see how violence reigns in a country scourged by impunity and wrapped in terrible corruption: two inextinguishable fires. 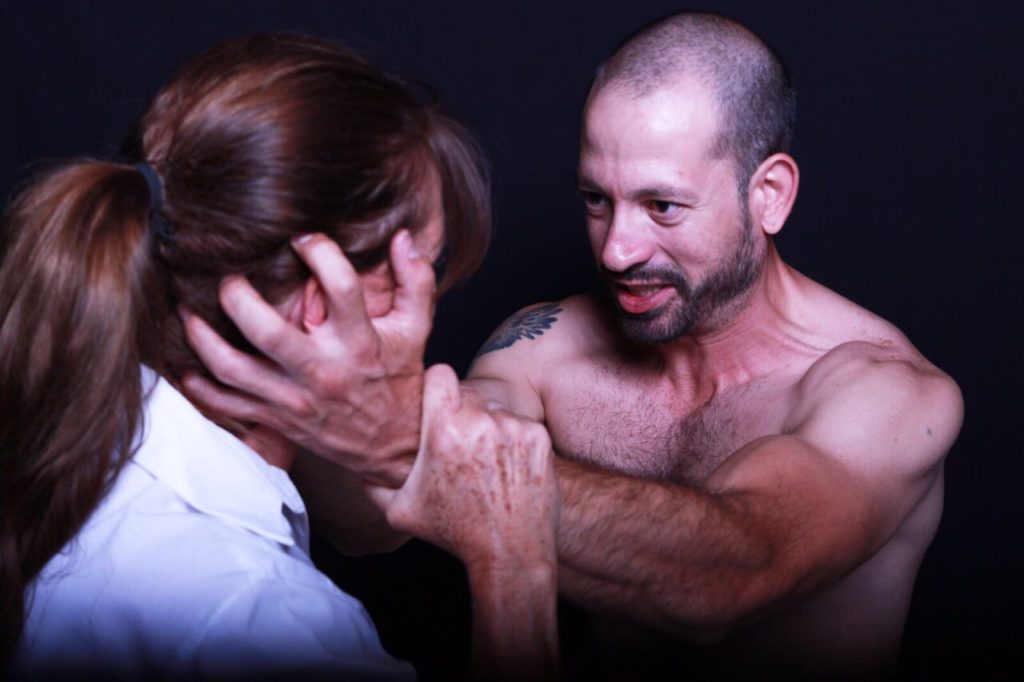 Leticia Huijara’s When There Were Grenades in November at Casa Musa. Photo: Erick Hinojosa

The work starting point and context of the play is the drama around a kidnapping and also shows us the process of cure, because of the events, whether the kidnapping, the death of a kidnapper or the imprisonment of someone, are part of a very painful process. This play reflects the process of knowing where we are and what we have to do in order to continue living because we can not go on if we do not digest what happened.

When There Were Grenades In November intermittently resorts to an idyllic metaphor shared by the characters and the whole country, the emblem of everything we want to eradicate, but that reality keeps painfully anchored to the earth.  The text is inspired by current events and highlights the ability of human beings to express and share the deepest feelings, even in hostile and painful circumstances.

During the play, we see a series of encounters between the two characters who have nothing in common and apparently nothing brings them together. However, the environment of violence is what has united them. On the one hand, there is an inmate, convicted of kidnapping and murder, and on the other the interviewer who seeks to find the details of the last moments of the life of the only man who cared for and protected her. So she makes an agreement to pose as a journalist in exchange for paying the murder’s wife so she can leave the country with his daughter.

The inmate rebels before the morbidity of his interviewer so a tense and complicated relationship develops leading the characters to strip their personalities, rediscover their respective losses and recognize themselves as victims of a country where extreme violence leaves the criminal scope to invade the privacy of many inhabitants.

The kidnappers not only kidnap a person, they also kidnap the whole family.  This work leads us to make a parallelism: people live abducted by crime and shameless politicians loaded with indifference, who do not want to realize what is happening.  The dramatic axis is a feeling of debt, which makes her seek the confrontation with the inmate, poking her wounds without knowing that that will lead her to undress her own soul.

When There Were Grenades In November also refers to the urban spot that is consuming the rural, as a metaphor of what will never again be and seeks to go beyond the subject of kidnapping to talk about the possibility of communicating and reflect in the other. These characters who start full of anger and restraint, unfold their emotions to accept their responsibilities and mistakes. They are beyond good and evil and are a tragedy as well, as they are sequestered of their own lives.  It also talks about the situation of violence in which we live, the lack of expectations in every sense, labor, social and economic issues, and shows the increasing distance between those who have and those who have nothing.

Undoubtedly it explores the emotional tension in an exceptional way, the performance of Vicky de la Piedra causes the viewer to have a lump in the throat and the character of Ivancho Esquivel shows that he is not a soulless man making the spectator hate it.  The script demands a deep work because the characters are not based on clichés, which means according to its director Carlos Gueta that are not white or black, they are characters with a large-scale of nuances that demands at all times the best of each actor.  It is noteworthy the great performance of both characters that at all times make the viewer feel that they are really living what happens in the stage. This shows a high level of acting, an arduous work, and study, which results in a magnificent creation of the characters that give life and make the proposal profoundly rich, as they lead us in a masterful way to a whole swarm of deep emotions that live during the development of the staging.

The existence of a series of constitutive elements that have their referential correlation within the subject of kidnapping in multiple senses is undeniable: the present time in social and political terms and the intersection between fiction and the intertext that intertwines in the cell that presents us two worlds in the same world.
Opposites generate estrangement and distrust.  And on the other hand, there are surprise effects that accentuate the sensation of a hasty world, mounted on a tremendously boring reality.

Through the interviews, the actors show us the universe of those who exercise power and that of those over which power is exercised.  The theatrical force of the spectacle lies in the impotence of these two great actors, in the struggle that each one makes to endure his pain and in the impotence that comes from not finding meaning to life, since its existence is not precisely filled with desire and much less hope.  Confessions, reproaches, memories, and violence grow in this gap, filling the space of tension. Containing the conflict until it comes out slowly, sometimes insinuating itself, and abruptly at other times, it is the task of the actors who achieve an exceptional work, from the composition of different profiles (each one is very well-defined as a character and is very different from the other), to the way in which their conflicts pass, magnifying them in an exceptional way so that the viewer can capture them thanks to the proximity of the stage and the dimensions of space.

This work is a reflection of the Mexico we are living, where there is an exponential increase of crimes, especially those related to kidnapping where the authorities are exceeded.  The scenographic concept is very well achieved since it makes the viewer immerse himself in the atmosphere of the prison with turrets lighting and with a sound design with alarms and movement of bars.

Ivancho Esuivel, originally from Monterrey, began his career at the 2004 State Theater Meeting in the work Crónica De Una Muerte Anunciada.  Since then, he has participated in several works such as Como Que Te Parta Un Rayo, Ruta 13, Nuestra Señora De Las Tortillas. He lived 8 years in Spain where he participated in The Rocky Horror Picture Show and Tríptico, among others.

Carlos Gueta, was born in Nayarit, he studied the degree of Art and in Spanish Language and Literature, and he also has a Master’s Degree in Higher Education. He has been president of the Academy in matters of art, adviser of theatrical promotion and coordinator of the diploma of scenic update in several secondary schools of Nuevo León. He has also been the General Director of the theater colloquium of Nuevo León 2008-2012. He has participated as an actor in more than 50 plays, directed by great masters such as Jorge Vargas, Ángel Norzagaray, Sergio García, Gerardo Valdez and Hernán Galindo, among many others. He has directed plays that have participated in state, regional and national shows and has also participated as an actor in several short films and feature films.

Casa Musa is a theatrical space with the purpose of promoting culture, and above all, the performing arts.
In addition to presenting plays, in this place have been carried out different workshops given by artists such as Luis Felipe Tovar, Héctor Bonilla, Alberto Estrella, Inés Morales, Odiseo Bichir and Patricia Reyes Spíndola.  Casa Musa opened its doors in March 2015 with a master class given by Alberto Estrella.  It is a space full of magic where you can appreciate the staging of excellent quality with professional actors of recognized prestige at national and international level.  A place of coexistence where acting and dramaturgy workshops are given to support the artists on the way to their professional excellence.  The first work that was presented in this place, was The Maids by Jean Genet.

Leticia Huijara studied Dramatic Literature and Theater at UNAM. She has worked in several films such as La Ley De Herodes by Luis Estrada, Lola De María Novaro, Sexo Por Compasión by Laura Mañá, Ciudades Obscuras by Fernando Sariñana, and Cilantro Y Perejil by Rafael Montero, among others.
In theatre: De La Calle De Julio Castillo and acted in the teleserial teleserie El Octavo Mandamiento.
As a film writer in 2010, she won the first place in the sixth feature-length script contest Matilde Landeta. 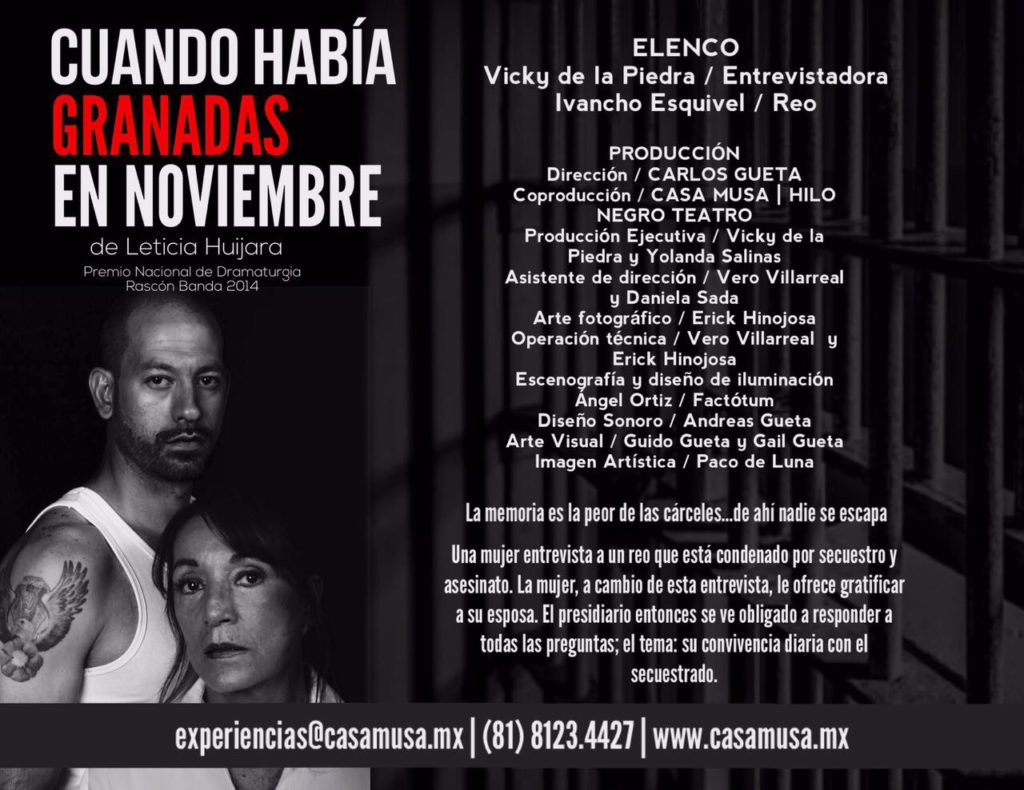 Leticia Huijara’s When There Were Grenades in November at Casa Musa. Photo: Erick Hinojosa 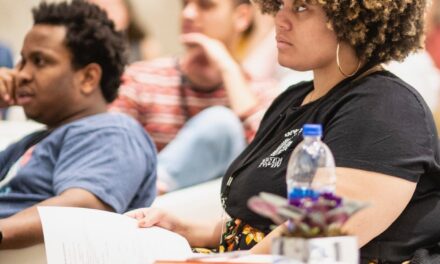