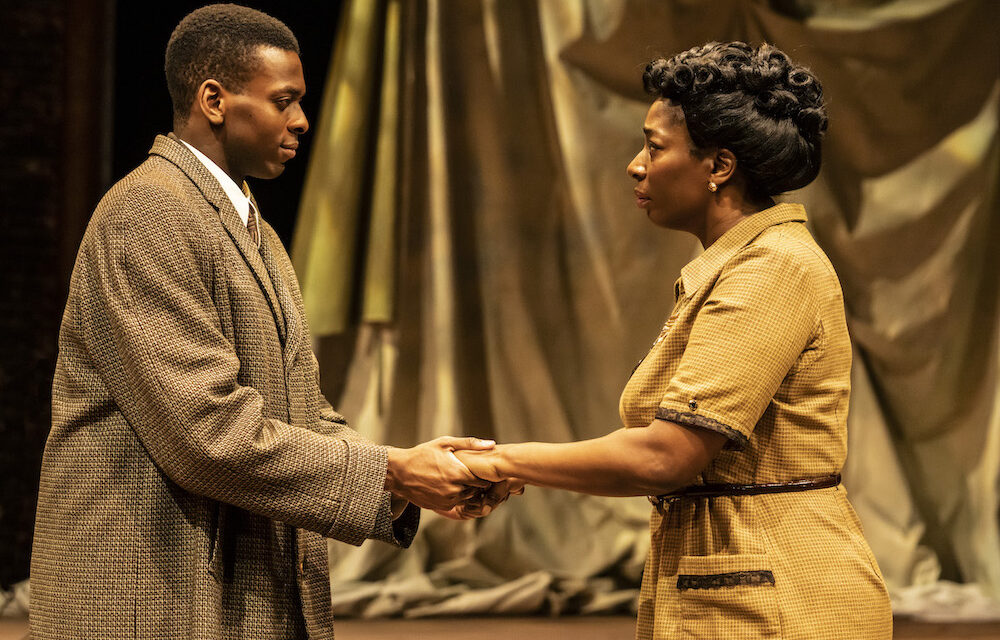 The National Theatre has a good record in staging classic American drama by black playwrights. James Baldwin’s The Amen Corner, August Wilson’s Ma Rainey’s Black Bottom and Lorraine Hansberry’s Les Blancs have all had terrific new stagings. Now it’s the turn of activist writer Alice Childress’s Trouble in Mind, which was first successfully produced off-Broadway in 1955. By a grim irony, this play — which attacks the attitudes of white producers and directors towards black creatives — was itself a victim of racism: the proposed transfer to Broadway fell through because Childress wouldn’t tone down her play to make it more acceptable to mainstream audiences.

Set backstage in a dusty Broadway venue, Trouble in Mind explores the story of Wiletta, a middle-aged, African-American actress who has a part in a barnstorming melodrama, set in the Deep South, which boasts a strong anti-lynching theme. The problem is that, despite her talents, the odds are stacked against her: both the playwright and the director, patronizing Al Manners, are white. The cast is divided into black people — the older Sheldon, the younger John and the well-healed Millie — and whites: naive Yale graduate Judy and veteran star Bill. The plot of this play-within-a-play revolves around a voter recruitment drive and the climactic lynching of a young black activist.

In this melodrama, Wiletta’s role is that of the young activist’s mother. The crucial part of this story, which is designed to spark outrage in the audience, is not only the lynching of the protagonist, but also the fact that his mother lets him go out to face the mob — instead of making him run away to save his life. When Wiletta protests that no mother would do this, the oily Manners tells her to stick to the play text. She challenges him by asking whether he would give up his son to a lynch mob, and demands that the scene be rewritten. He contends that realism is not the point: the play is political and only a sacrificial victim will appall the audience enough to make them think about racism.

Written as a deliberately uneasy mixture of acute satire and heartfelt tragedy, Trouble in Mind can be uncomfortable to watch — and that is a good thing. As well as some wonderfully grotesque impersonations of racist stereotypes, such as the black mammy, the wood-whittling old man or the young maid who exclaims “Laud have mercy!”, there is plenty of fun to be had with white stereotypes — the Southern belle and the hectoring politician. But in sharp contrast there is also the horrifying moment when Sheldon shares his story about witnessing a lynching, or the excruciating passages when the liberal Judy expresses her white guilt or Manners’s anguished speech about how “People think it’s wonderful to be white!”

The context of the play is 1950s New York, when well-meaning liberals want to support the Civil Rights movement, which was just beginning (Martin Luther King gets a name check). In the background are the McCarthyist anti-communist witchhunts. But Childress’s point is that white people in positions of power, such as the director Manners, might think that they are progressive, but that doesn’t mean that they are prepared to listen to black people, or take their arguments seriously. In fact, Manners is a portrait of smarmy and manipulative condescension. Although Childress writes with a very fair sense of balance, giving every character room to express their individuality, the result is clear: black people cannot rely on the good will of the whites to get justice.

As the actors discuss their roles, various questions arise which remain relevant today. Can dramas that are overtly anti-racist use racist language? A racial slur spoken on stage might help galvanise an audience into objecting against a racist character, but maybe it also normalizes the use of the offensive word. Added to this is the practical situation of the black actors: if they protest or become difficult, their employment prospects will be affected. As Sheldon says, he needs the job to pay the rent. Each black actor is taught to comply with the white folks: to smile, laugh at their jokes and accept the roles that have been written for them. So although Manners insists that he wants the actors to be truthful in their performances, he objects when Wiletta questions her character’s motivation.

Nancy Medina directs the show, designed by Rajha Shakiry, with a bright touch that sometimes emphasizes the humorous satire over some of the terrible tragedy. She is brilliantly served by Tanya Moodie (familiar from Motherland), who reprises the role she performed in 2017 for Laurence Boswell. Once again, her Wiletta is a masterclass: she shines in her humorous performance of racial stereotypes and ends the evening on a powerfully heartfelt assertion of her aspirations. Her range is impressive, and her singing moving. Equally strong are Daniel Adeosun’s John and Cyril Nri’s Sheldon, who give depth to the serious side of the drama, while Naana Agyei-Ampadu’s Millie and Emma Canning’s Judy are perfectly entertaining. As well as Gary Lilburn, who plays Henry the caretaker, the rest of the cast — superb Rory Keenan (Manners), Joe Bannister (director’s assistant Eddie) and John Hollingworth (Bill) — are similarly convincing. This revival of an American classic, complete with its moments of trouble, is both relevant and fun.

This article was originally published on Aleks Sierz on December 9, 2021, and has been reposted with permission. To read the original article, click here.