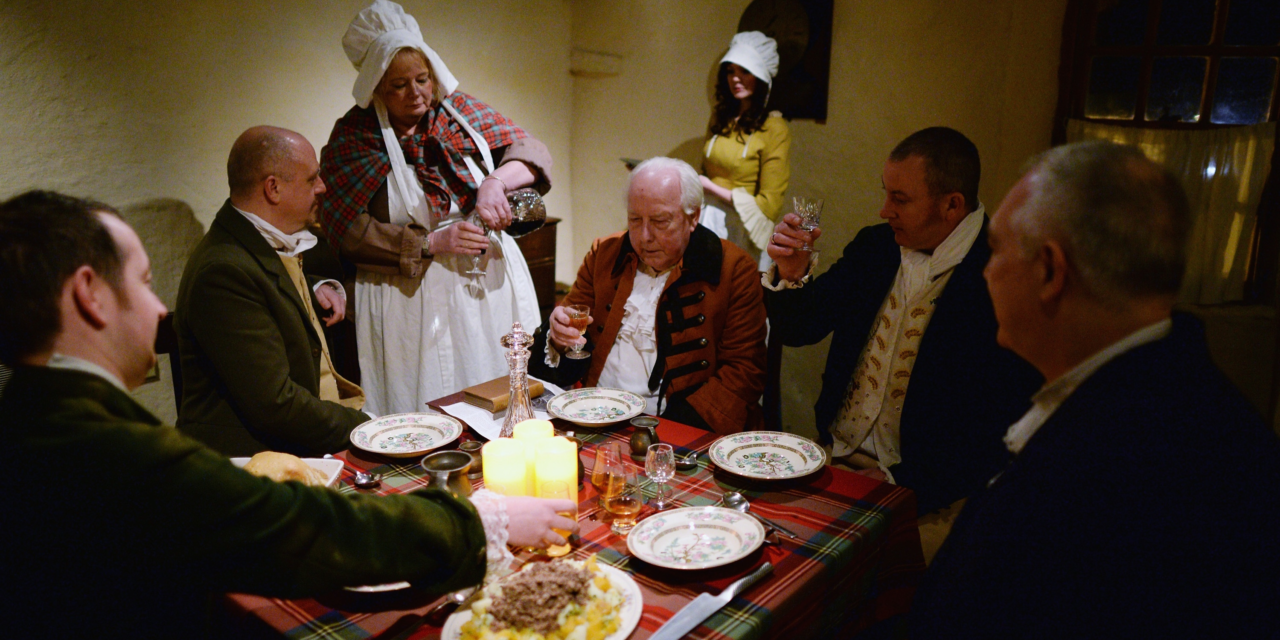 A re-enactactment of the first ever Burns Supper, held in 1801 on the fifth anniversary of the poet Robert Burns’ death inside the cottage where he was born in 1759 in Alloway, Scotland (Photo: Jeff J Mitchell/Getty Images)

“The Big Burns Supper aims to heal political rifts between the Scots and the English with 11 days of arts events–and plenty of haggis,” reports Nick Harding

To the outsider, the border region between England and Scotland might seem like a giant wound in Britain’s body, dividing English Brexiteers and Scottish Remainers. It has received a fresh rub of salt in the last few days, too, after SNP leader Nicola Sturgeon announced that her party will decide whether to push for a second independence referendum, depending on the terms of Brexit.

While politicians have done little to heal the rift, a cross-border arts company is trying to bring the two nations together by deploying a powerful symbol of peace to promote inclusion and collaboration. For 11 days, tens of thousands of people from both sides of the geographic divide will descend on Dumfries in the Scottish Borders to experience the restorative power of the haggis.

The Big Burns Supper is a mass participation contemporary arts festival which includes performances from an eclectic roster of artists. This year it consists of 200 live events taking place in more than 30 pop-up and permanent venues. Comedian Bill Bailey, rapper Ocean Wisdom, singer-songwriter Eddi Reader and folk icon Donovan are all appearing, as well as the sell-out cabaret show Le Haggis.

While it is not a political event, its location and mission to bring people together have made it a beacon of hope where audiences from both sides of the independence debate can meet, share a dram, enjoy some international-standard entertainment, eat some offal and celebrate one of Scotland’s most successful cultural exports–the poet Robert Burns.

“The Big Burns Supper has always been about getting people to come together, to socialise and enjoy themselves as a community,” says Graham Main, founder and executive producer of the festival. “This spirit of collaboration is more important today than ever, given national events. People are divided, we provide an opportunity for them to come together.”

Up to a quarter of visitors to the Big Burns Supper last year came from England, and it is hoped that number will increase this year. Politics features, but only in satire. One of the acts is the Edinburgh Fringe success Trumpageddon, which lambasts the US President.

The Burns spirit plays a central part in the festival vision. “Auld Lang Syne was written by Burns here in Dumfries, it was shaped here, and it embodies the spirit of the town,” says Main. “The line ‘and there’s a hand, my trusty fiere, and gie’s a hand o’ thine’ is symbolic of what the festival strives to achieve. Political agendas do not matter, we want to invite the world here. We want people to feel they belong.”

During the 2014 Scottish independence referendum, organizers realized its overt celebration of Scottish arts and culture could be perceived as a sign of political affiliation and enlisted the help of MSPs to assert its neutrality.

“There were murmurings that celebrating Burns night meant you were a ‘Yes’ supporter,” says Main. “We had to work through that and we actively engaged MSPs to build cross-party support for what we were doing. There was a debate in Holyrood in which members reiterated the non-partisan spirit of Burns night.”

Scholars have often tried to predict how Burns would have voted had he been alive for the Scottish and EU referendums. He was certainly a supporter of the French Revolution, so may well have been in the Remain camp, but throughout his life, he remained both a Scottish and British patriot. He championed equality and democracy.

His poem A Man’s A Man For A’ That imagines a future in which all people live as equals, in mutual trust and respect, so it’s likely he was no fan of borders or divisions. Indeed, the Borders region where he lived before his death in 1796, while possibly seen as divided by some outsiders, is, in reality, unified by a common history.

The region was linked by industry and housed a series of huge munitions factories where the Scots and English lived and worked with each other. Today as many people travel to work from Carlisle to Dumfries as they do the other way.

“Anyone who is not here sees a border. The people who live here don’t,” says Main.

This article originally appeared on Inews on January 19, 2018, and has been republished with permission.