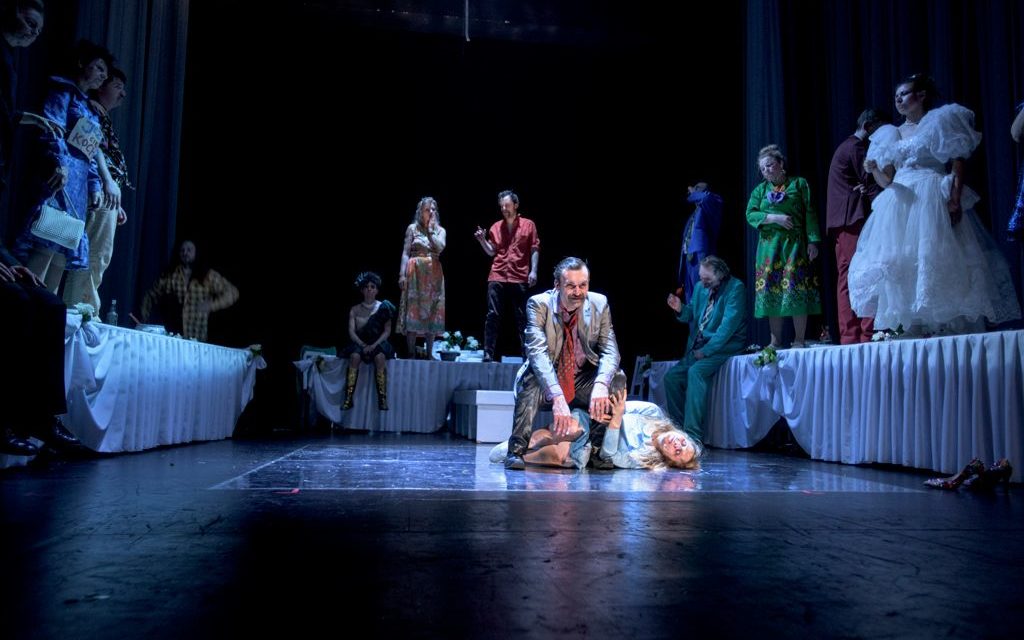 Traditionally, the veil of a Polish bride—removed at the end of the ceremony to mark her passage into womanhood, then tossed to or passed around her wedding party—would grace her again in death, part of the preparations for her burial. Perhaps You’ll Be Pleased, Madam, Or The Very Last Wedding In Kamyk Village is only customary, then, in its conflation of merry nuptials and much darker affairs. The production, which premiered at Poznań’s Teatr Nowy last March, took two prizes at the Divine Comedy festival in December—Best Director, awarded to Agata Duda-Gracz, and Best Actress, to Edyta Łukaszewska.

As inspiration, Duda-Gracz—also the writer and set and costume designer—takes up a 1981 journalistic account by Wiesław Łuka, titled I Do Not Make A Statement (Nie oświadczam się). It explores the infamous 1976 Połaniecka case, where on Christmas Eve, in rural southeastern Poland, a young, pregnant woman, her husband, and her brother were allegedly killed by several of their neighbors—supposedly over a rumor of sausages stolen at a wedding. The accused were said to have sworn 30 drunken witnesses to secrecy; the trauma and a troubled trial would grip the community in awful and unexpected ways. 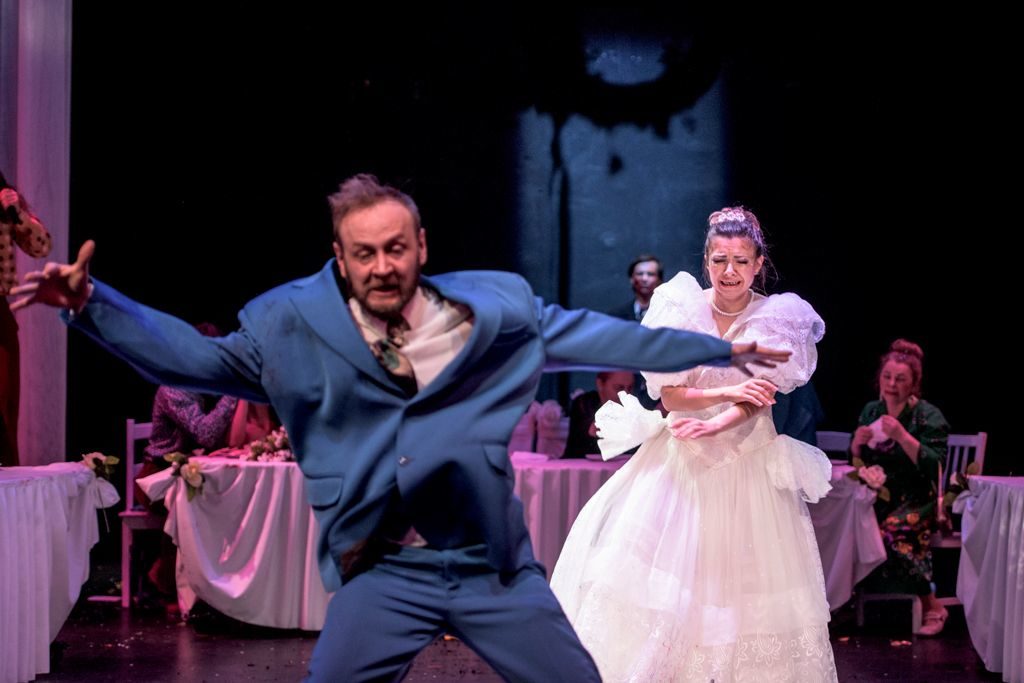 Visually, You’ll Be Pleased filled the Stary Teatr’s Kameralna stage from floor to ceiling. Decorations hung among the lighting instruments, high above three extra-long tables crowded with all of the dinner courses—and local characters —a small-town wedding reception could need. Similarly, the show’s story reached simultaneously for the grotesque and the sublime, as it shifted freely between the joyful celebration at hand and spectral re-stagings of unspeakable acts gone, but not forgotten.

A blind woman occasionally overcome with otherworldly visions sits stage right—near where the grave of the present bride’s brother, based on one of the source material’s victims, is situated. Before too much fun is had, his gruesome torture and murder are shockingly, violently replayed on a table turned upright on its end, toward the audience. It’s a sudden fright—but far too early in the festivities for us to turn away. We are caught in a similar clash, but more gradually, as Łukaszewska’s lovelorn character—the dead brother’s ill-fated bride—wanders amid the gleeful action, lost in more ways than one.

As the party rages on, the performance’s narrative and tone, along with its time, location, and ’90s-dance-club lighting cues, shift as quickly as the wódka is downed, or the karaoke begins. In the process, it appears a whole dramaturgy of Polish wedding plays is conjured—from Stanisław Wyspiański’s classic drama The Wedding, Jan Klata’s production of which also played at this festival, to The Dybbuk, S. Ansky’s seminal Yiddish-language play, whose bride-to-be is possessed by a lost love’s spirit. 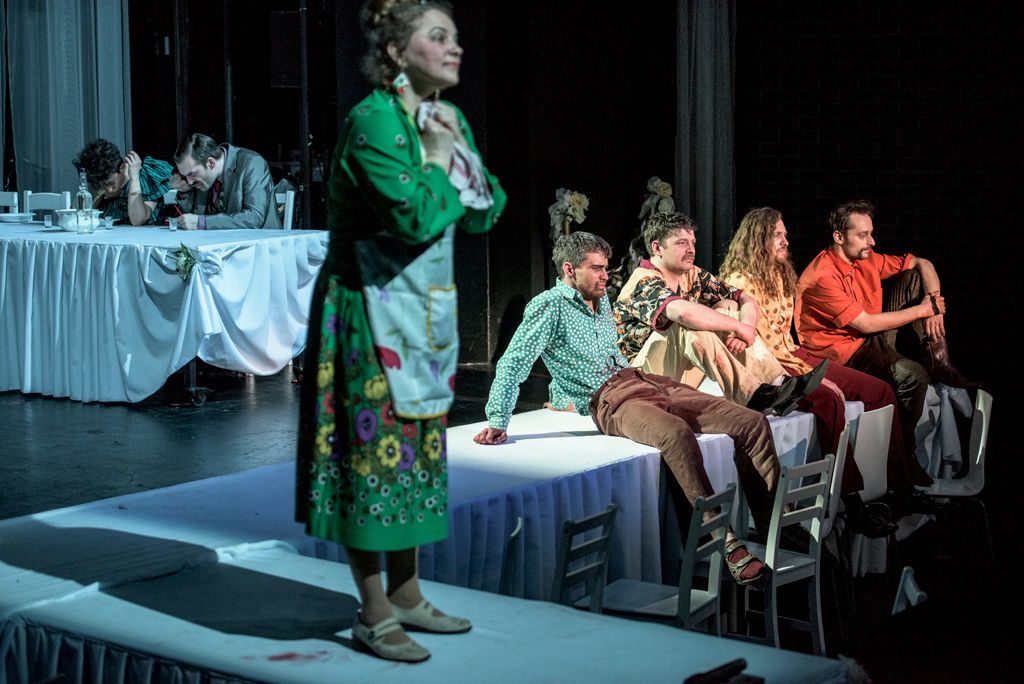 Ultimately, You’ll Be Pleased winds itself into an intoxicating whirlwind of celebration, horror, and ultimately, an anguished sense of irresolution. The twists and turns of familiar and funny; mysterious and frightful; and he said, she said are as dizzying as the dancing. If we are indeed pleased, it is only to prepare us to be shocked again, and vice versa—until the very ground underfoot, which features prominently (and terribly) at the play’s conclusion, feels uncertain. With a last moment perfectly chilling in its accumulated ambiguity, nearly all who are present seem to share the question: What just really happened?

Many of the villagers in Łuka’s sensational reportage were sentenced for false testimony. These undeniably accomplished artists, in turn, hold their story close, all while their generous performances pull us in. Should we lose our place between the marriage and the murder, the ensemble periodically, playfully sweeps us back up into the experience, when they propose a toast, or spill off of the proscenium. In the end, we become their guests and witnesses, as much as at any off-stage wedding. If we are also their judges, we know, too, deep down, that we are not entirely unlike them—as unsettling as that may be. 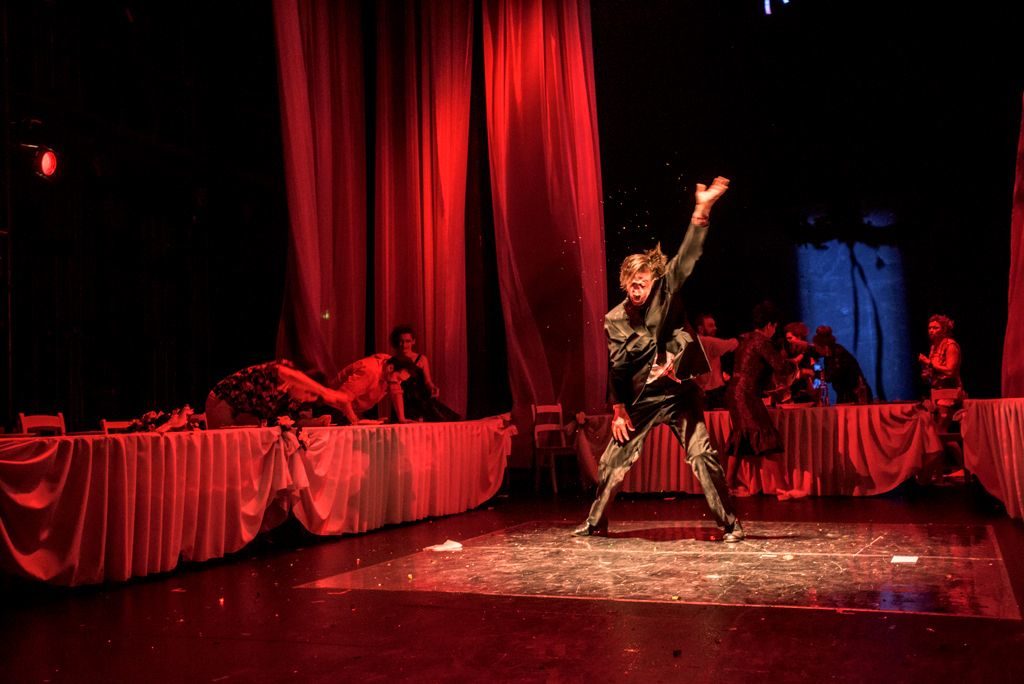