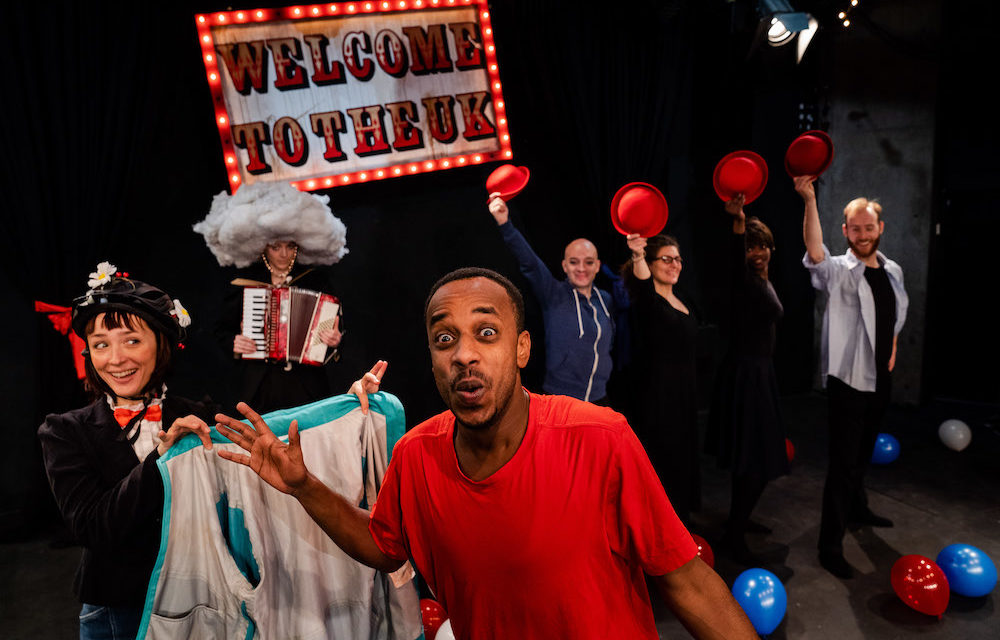 The cast of "Welcome To The UK" Photo: José Farinha

Refugees have an image problem—and it’s getting worse. But the widespread anger that their presence still provokes says much more about the anxieties of the host society than about the realities of forced migration. Recent scare stories about a cross-channel invasion show just how inhuman the British media has become. In such cases, theatre is on the side of the angels, and recent shows such as Joe Murphy and Joe Robertson’s highly successful The Jungle prove that there is an audience keen to listen to genuine accounts of the refugee experience. One such show is this offering by director Sophie NL Besse, who volunteered at the Calais camp in 2015 and decided, on her return to the UK, to set up Borderline, a theatre company which comprises some of the asylum seekers she’d met.

The company is a mixed ensemble of people who have recently sought refuge in the UK, and its members come from three continents, including the countries of Syria, Afghanistan, Iraq, Sudan, Gambia, Zimbabwe, as well as contributors from France and Italy. It is an amateur theatre group, a kind of makeshift rainbow nation of performers, and this show, Welcome To The UK is an 80-minute satire, basically a series of short sketches, which aims to raise awareness of the obstacles facing refugees, including some of the new concerns brought on by Brexit. On this occasion, Borderline worked alongside the Women for Refugee Women drama group, an organization that raises awareness about the trafficking of women to the UK, resulting in several of its members joining the cast.

From the start, the devised show is warm-hearted and inclusive, with the cast inviting the audience to enjoy “our funfair.” An MC in red glitter jacket introduces the popcorn and candy floss sellers, whose outrageous prices give the stories of the refugees a context that is both humorous and existential. As a reminder of reality, a young man dons a Deliveroo jacket. The sketches come at us in a tumble of bodies, with songs—anything from Amazing Grace to riffs on Mary Poppins—with black humor and a lot of physical clowning. A few stage pictures are particularly memorable: Rehman, who is sitting on a step ladder waiting for his status to be confirmed, tries to call his wife Yasmeen, but the line is poor and their relationship is as fragile as this feeble internet connection. Debby from Gambia comes to the UK to find a husband, but is swaddled as a bride, and ends up in the arms of trafficking swine. An Iranian tranny sings Queen’s I Want To Break Free. Baraa, a Syrian refugee, is infantilized by a do-gooding liberal.

Amid the jokes, there are some serious messages: we are reminded of the dangers and the death toll of perilous sea crossings; we are confronted by laughter in the face of poverty, and we see Brexit experienced as a nightmare. Bingo and an emotional roller-coaster give us metaphors to describe the experience of being in asylum-seeker limbo, waiting for the Home Office to grant leave to remain, and then having a mere 28 days to find a job, a place to live and a bank account (you should try it!). We are constantly told that the policy of creating a “hostile environment” for newcomers is still alive and well, while images of ghostly presences, dead bodies, and impoverished babies underline some of the feelings experienced by refugees.

The problem with this show is that, like a lot of devised work, there is no compelling central vision, no coherence, and no context. The politics are mainly clichéd and many of the jokes are crass. Most of the cultural references—from Popeye and ABBA to Romeo and Juliet—are old and tired. There is nothing new here. Oddly enough, given the composition of the company, most of the situations feel extremely impersonal. I would have loved to hear the real voices of people who have had traumatic experiences; instead, the general sense of silly clowning drowns out the potentially touching moments. Except for a few rare moments, it all seems curiously inauthentic. None of the satirical material has any real bite; after 30 minutes all of this gets a bit tedious; after 70 it is pretty unbearable. Sadly, this show is neither funny nor illuminating.

Directed by Besse, the large cast perform in a rough and ready way, and there are too many to name individually, but I was impressed by Mohand Hasb Alrsol Badr, Baraa Halabieh, Abd-Al Rehman Slama, Peter Pearson, Debby Kareem, Rob Landi, and Majid Zarei. The bare set, designed by Sayed Habib Sadat and Iona Curelea, is strewn with balloons, a step ladder, and chairs, and features a small but sadly under-used haunted house. But however sympathetic you might feel about the project of this theatre group, it is hard to ignore the shortcomings of a show that is poorly and self-indulgently put together, and that mainly fails to adequately utilize its most precious resource: the real-life experiences of its members.

Welcome To The UK is at the Bunker Theatre until February 16.

This article first appeared in Aleks Sierz on January 25, 2019, and has been reposted with permission.