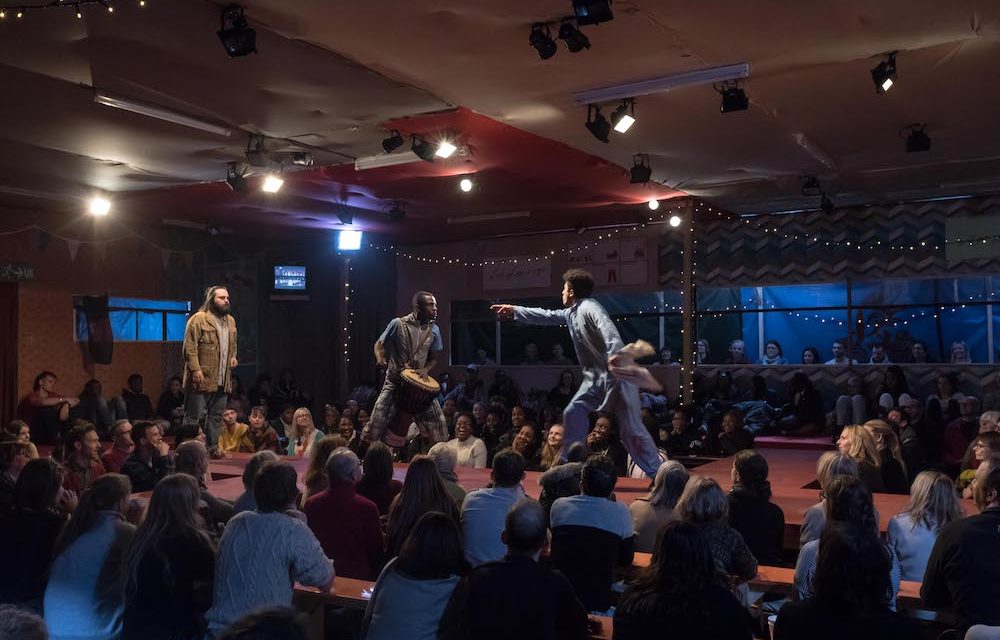 Refugees, it is said, have no nationality—they are all individuals. This new docu-drama, The Jungle, deftly put together by theatre-makers Joe Murphy and Joe Robertson, is a somber account of a couple of recent years of the great European migration crisis, and acts as a testament to the individuality and complexity of the refugee experience. As this co-production between Good Chance theatre company, the National, and the Young Vic opens, in an immersive production steered by directors Stephen Daldry and Justin Martin, it raises various troubling questions about this kind of theatre, most of which are addressed by the play itself.

The main space of the Young Vic has been turned into the Afghan restaurant, run by Salar (a 32-year-old refugee), in the Jungle camp in Calais, with the audience seated at benches and rickety chairs, and at tables that are also used as a makeshift stage. The roof and walls are patchwork, with signs and posters (and even an Arsenal football club flag), and we sit in the mud on back-straining chairs. Before we get to the restaurant, we pass through a re-creation of one of the dwellings in the encampment, smelling of fresh wood, and with a bed and lots of tinned foodstuffs. But the physical discomfort that immersive theatre forces on us is nothing like as grueling as the mental pain that empathy with refugees can cause.

Although the play begins in deliberate confusion, with shouting, chaotic snatches of dialogue, and an atmosphere of danger—the emergency is the prospect of eviction—the docu-drama soon settles down as Safi, a 35-year-old Syrian man and a former student of Eng Lit, takes over as narrator. He leads us back to March 2015, when the construction of a large encampment by a variety of refugees was begun. It is called Zhangal, and is divided into areas according to nationalities—Afghan, Kurdish, Iraqi, Eritrean, Syrian, and Sudanese. Very soon, as well as the restaurant, other amenities of a city are built: places of worship, a school and a center for women and children.

A huge list of highly individual characters appear, such as Norullah, a 15-year-old from Afghanistan, Okot, a 17-year-old from Sudan, Salar, the restaurant man from Afghanistan, Mohamed from Sudan, little Amal (a child from Syria), and many, many others. Pretty soon, after the picture of Alan Kurdi—the child from Syria washed up on a beach—went viral, British volunteers start to arrive: middle-class teens Beth and Sam, older politicos such as Derek and aid workers like Paula, and not forgetting the occasional freebooter like Geordie Boxer, with his banjo and his songs.

A picture emerges of a rough-and-ready democracy, which despite severe problems (lack of shelter, food and sanitation; violence and ethnic tensions) gradually creates a place that is a workable environment and an improvement on what went before. The paradox, of course, is that these refugees don’t want to live permanently in what is now being called the Jungle (“We are not animals”) and their sole aim is to reach the UK. Many die in the attempt, and Murphy and Robertson show us a burial, in angel’s corner, of one migrant who was killed trying to board a lorry.

In one of many subplots, Beth befriends Okot—who in a stunning monologue tells her his personal story—and tries to pay for a smuggler to get him across the border. Lots of vivid details emerge: refugees who phone home from the camp, pretending to their families that they have already reached the UK; the camp is described as “Glastonbury without the toilets;” one refugee has The White Cliffs Of Dover as a ringtone; there is joyful dancing and mournful setbacks. Theresa May, the British Home Secretary at the time, is furiously mocked. There is a fire, which coincides with the November 2016 terror attacks in Paris.

Much of the writing is clever: not only does the play act as an information-rich docu-drama, it also defuses criticism by, for instance, passages that discuss virtue-signaling—and the restaurant is even reviewed by the Sunday Times critic, the late AA Gill. More than once, the image of hope shines brightly across the proceedings—and Derek especially plays up the role of this place as an example of collective decision-making, popular democracy, and leftist community. Yet the problems of the camp are never shirked. Instinctively, I felt that there’s a balance between good and bad. At almost three hours in length, however, the play is a bit of an overload—often, I experienced it as all just too much.

Thinking about it afterwards, the power of the presentation tends to obscure just how middle-class this whole venture is. Somehow we end up knowing much more about the British characters than about the refugees. Although highly individual, we learn very little about who they really are and where they come from. What is their homeland? What are their politics? Their religion? Their friends? Their vices? Blank. Blank. Blank. But if the show is aimed at nice middle-class people, you could have doubts about its veracity. Are refugees such nice people? Are none of them liars, thieves, or dangerous? Here even the people-smuggler has charm. These are refugees as we like to see them: as victims.

Daldry and Martin’s production, designed by Miriam Buether, is challenging both physically and emotionally. The cast is excellent and enormous. Although it feels wrong to single out particular performances, I couldn’t help being especially impressed by Ammar Haj Ahmad (Safi), John Pfumojena (Okot), Mohammad Amiri (Norullah), and Ansu Kabia (Mohammed). Likewise, playing the Brits are Rachel Redford (Beth), Michael Gould, Jo McInnes (Paula), Alex Lawther (Sam), and Trevor Fox (Boxer). All in all, this is a sobering evening that lacks a really coherent or conventionally dramatic story, and is low on metaphorical resonance, with the exception of Okot’s description of his many deaths and the division of the camp into nations. It tells us little that we didn’t already know, but it is, I must admit, done with awesome integrity and total commitment.

The Jungle was at the Young Vic until January 9.

This post originally appeared in Aleks Sierz on December 23, 2017, and has been reposted with permission.