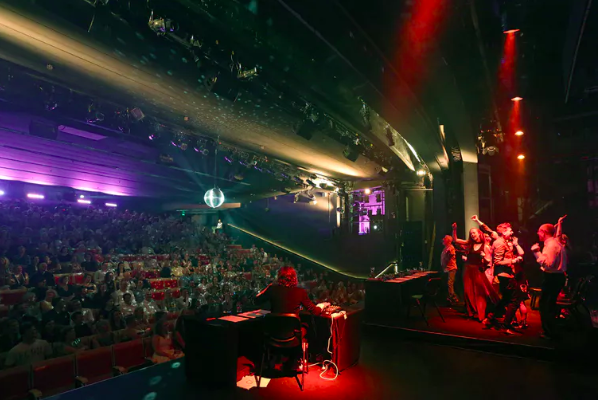 The performers dance to songs from different eras. Prudence Upton

Before even entering the Drama Theatre at the Sydney Opera House on the opening night of All The Sex I’ve Ever Had, there is curiosity in the air. This is helped by the fact that, unusually, the performers are mingling with the audience in the lobby.

Each of the six performers, ordinary Sydneysiders over 63 who will be revealing intimate details of their lives, have set up a table of memorabilia. There are framed photos, letters, condoms, and even a bottle opener in the shape of a yellow penis – or is it a banana? – that has been well chewed by a dog (best not ask!).

There is a slight nervousness in the air too. What will we be forced to endure? Our culture encourages the belief that older people are asexual, that somehow on crossing a certain age, we are stripped of desire.

There is something a little anxiety-inducing about knowingly walking into a closed theatre in which we will have no choice but to listen to the over-60s talk about their sex lives. This isn’t helped by the fact that I am forewarned that there will be questions… and that the audience is expected to answer them! 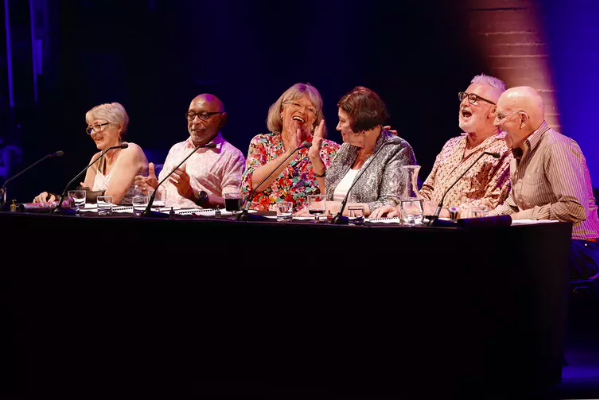 Peter, Jennie, Judith, Ronaldo, Liz, and Paul are all prepared to share their lives. Prudence Upton.

The stage is set up more like a conference panel than a performance, and the six protagonists take their seats at a long table in front of microphones and glasses of red wine. Alongside them sits sound designer, Steve Toulmin, in front of his laptop.

If we were worried before, we’re really worried now as we are asked to repeat after her, a pledge that

(The cast changes in each country the show tours to; previous oaths would have sworn Portlanders, Praguers, and Singaporeans to a similar silence.)

So, if you were hoping that this review would contain any juicy tidbits, I am sorry to disappoint you. You will have to visit one of cities that this unique performance piece will surely be brought to as it continues its successful world tour.

We settle down, and Toulmin announces the year–1943–and our six performers sway to Vera Lynn’s White Cliffs Of Dover. We’ve begun.

Peter, a 71-year-old retired solicitor announces his birth at Waverley hospital, followed by British-born Jennie, Judith from Sydney, Ronaldo from Glasgow, Liz from Sydney and 63-year-old Paul from Colombo.

From there, we are taken on a journey from their earliest childhood memories to the present day, and even into the technologically-enabled future. The years serve as stepping-stones, both for them and for us, with music from each decade punctuating the memories.

They dance to numbers ranging from Mambo No. 5 to Gangnam Style–we sing and clap along. The audience loses its initial nerves, suspends disbelief and becomes emboldened by the radical nature of what these six performers have chosen to undertake. Could we do it? Suddenly, we believe we could.

The first question comes and we are asked to raise our hands. Have any of us experienced what Judith has as a young child? Many have and the creators, dotted around the hall with hand-held microphones, encourage them to share their experiences.

A man seated behind me goes out of his way to call director Darren O’Donnell over to share – or over-share, his partner looked like she was thinking – but it seemed he just had to do it.

There is something about the confessional, yet safe, space the show’s creators have constructed with their open – yet unintimidating – approach. Combined with the unabashedness of the performers makes it utterly okay for the audience to share.

The years roll on, and it’s not all innocent. As the program notes state, following feminist philosopher, Martha Albertson Fineman, “Vulnerability defines the very meaning of what it means to be human.”

We learn about these six (extra)ordinary people’s most vulnerable times, times when even those who were supposed to give them unconditional love and care failed them, or times when their trust was abused. Times when their affections were unrequited, and times when the reverse was the case and the consequences had to be dealt with.

Gender and sexual identity and the discovery of what they mean in each individual’s life are deeply significant themes. We discover that they both matter beyond all else and matter very little except when – tragically – they determine whether or not we can live happy, fulfilled lives, and even whether we can continue to live at all.

Undoubtedly, All the Sex I’ve Ever Had tells a partial story. Although none of the six come from particularly privileged backgrounds, they are all an urbane and cultured lot today. While two out of the six are gay men, there were no lesbians or transgender people. Paul is Sri Lankan, but otherwise, as in much of the arts, the full reality of multicultural Australian society was absent.

Sex and sexuality unite us universally but we make assumptions about who can discuss them. What All the Sex I’ve Ever Had reveals is that, in the right conditions, dialogue can be facilitated so that we can reach those points of vulnerability and recognize them in each other, thus learning more about ourselves.

All the Sex I’ve Ever Had is showing as part of the Sydney Festival until January 24. Details here.

This post originally appeared on The Conversation on January 22, 2016, and has been reposted with permission. 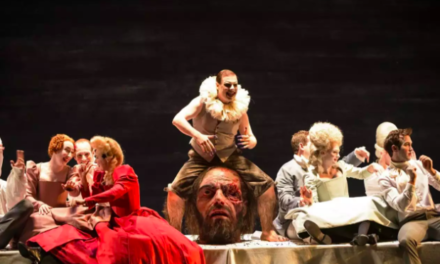 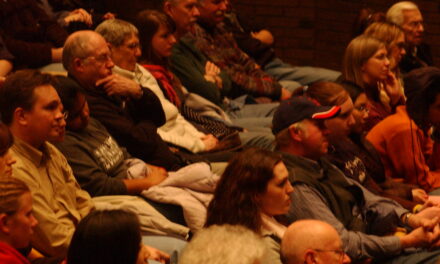