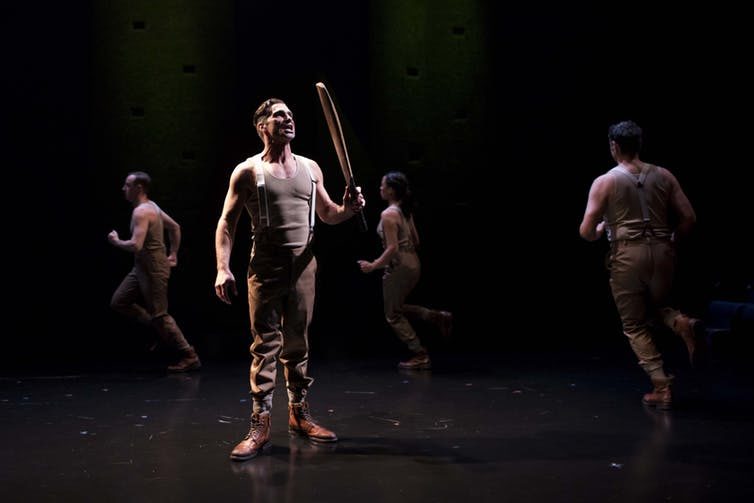 This one line summarises a sad reality of life for trans and gender diverse people. Despite coming from different cultural, religious and class backgrounds; despite there being so much diversity of opinion and politics; and despite expressing their gender identities in so many ways; what unites them is having experienced stigma and denigration.

It is for this reason that writer and director Priscilla Jackman decided to dramatize the life of Cate McGregor, who is arguably Australia’s most high-profile transgender person. Drawing on interviews with Cate, Still Point Turning depicts her life and transition journey using her own words.

The one-and-a-half-hour production addresses numerous themes: transphobia, substance abuse, masculinity, medical understandings of gender dysphoria, and differences between sexuality and gender identity. All of these topics are linked through Cate’s lived experience. 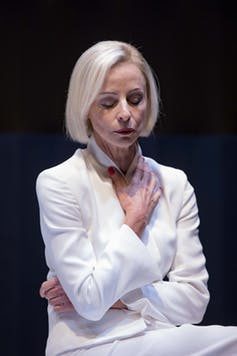 The play starts in February 2017, as Cate is in the hospital preparing for her gender reassignment surgery. She tells a few jokes to open the show, which very quickly suck in the audience and warm us to her personality.

Surtitles above the stage set the place and time as the play goes back in time to narrate key moments in Cate’s life. There is an intertwining of her present voice – played superbly by Heather Mitchell – with those of the other characters, most prominently her pre-transition self.

Ashley Lyons does an exceptional job in the role of Cate’s pre-transition self, portraying a hyper-masculine bloke who tops the class at the Royal Military College Duntroon. He moves to England to play cricket, before returning to Australia and becoming involved in politics while developing an alcohol and substance abuse problem. He explains his decision to re-enlist in the army in 1999 as being about proving his masculinity. (It is usually not considered appropriate to refer to a trans person by their previous name. Even though the play does use Cate’s previous name, I have not in this review.)

This is a theme common among transgender service members. As early as 1988, American researchers found that pre-transition transgender women were often attracted to armed services as a “flight into hypermasculinity”, the idea being that it would “make a man out of them”. Of course, as Cate and so many other transgender servicewomen in Australia and overseas have found, being in that masculine environment cannot suppress their feelings of gender dysphoria.

For me, three scenes really stood out. In two scenes about rejection, the actors intersperse Cate’s comments – some taken from Twitter, online forums and media interviews – with responses from angry trans people. They criticise Cate as a privileged, white trans woman who can “pass” (itself a controversial term referring to trans people who desire to be seen in public indistinguishable from cisgender people). Some trans people consider this an affront to those who believe in diverse forms of gender expression. This is a complex and controversial debate within the trans community.

In my own oral history interviews, several older trans women say that it was always their goal to be seen as women and essentially disappear into society after transitioning. Cate’s character points out that, for older trans women, disappearing was often a matter of safety. Several of my interview participants also explain that they simply want to live their lives unnoticed in their affirmed gender.

Cate’s transition journey was high-profile and, rightly or wrongly, that put her on a pedestal that set her up for attack. Cate inevitably experienced abuse from conservative transphobes, but she also copped lateral violence (to borrow a term associated with Indigenous experiences) when her affirmation of femininity drew the ire of some other trans people.

Young people especially have been upset at Cate’s supposedly heteronormative approach to gender, and her rejection of gender fluidity. Cate caused a sorm among LGBTI people when she rejected the Safe Schools Coalition in 2016. Regardless of whether you agree or disagree with Cate, the play shows the emotional toll that vicious, personal attacks took on her.

The other scene I found most moving is a telephone conservation between Cate and a Qantas customer service representative early in her transition journey. Cate is worried about what will happen when she goes to the airport and how she will be treated, presenting as female but with travel documents and identification under her male name.

The representative very sympathetically listens and kindly offers to change her name on the boarding pass. When the agent asks what her new name is, she says Catherine Elizabeth. The representative says it is a lovely name.

That scene stood out for me because it reflects the key message of the play: the importance of affirmation, love, and support for trans and gender diverse people. In the program (which is worth purchasing for its extra information, including an article by Kelly Glanney explaining terminology and meanings of transgender), Cate says she hopes the play will “humanize the experiences of trans people and… propagate that to a wider audience”.

Still Point Turning: The Catherine McGregor Story is showing until May 26.

This post originally appeared on The Conversation on May 1, 2018 and has been reposted with permission. 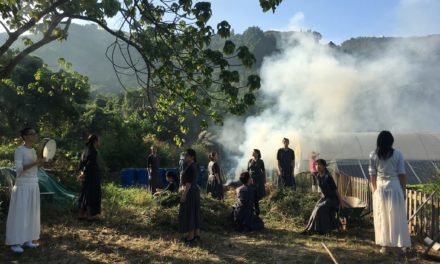