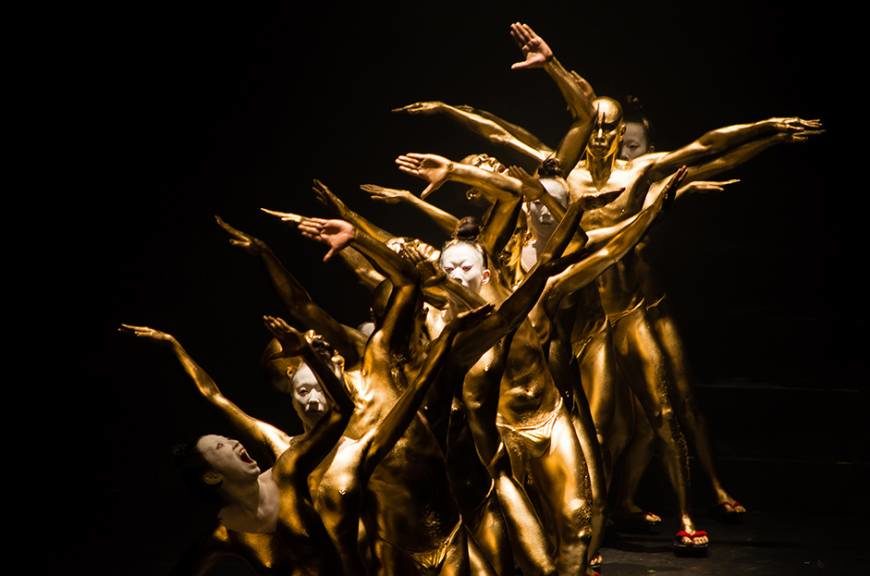 The gold-dusted Dairakudakan performers sparkle on stage for "Crazy Camel," at the Festival Automne en Normandie in 2013. Photo: Naoko Kumagai

“Many people have a preconception about butoh — that it is performed by dancers whose bodies are painted white. So when we debuted our current program, Crazy Camel, in France, and we came on stage covered in gold-colored powder, the fans and experts there thought we were pioneering a new style,” 72-year-old butoh master Akaji Maro says in a recent email interview. “In fact, this gold-powdered showy performance style has existed as a cabaret-show flip side of orthodox butoh since not long after the genre was started in 1959. It was developed by two trailblazers — Tatsumi Hijikata (1928-86) and Kazuo Ohno (1906-2010).”

Maro founded the butoh dance company, Dairakudakan (Great Camel Ship), in 1972, and the astonishingly athletic dancer has since also become well known to the non-butoh world as both a stage and screen actor. He was delighted by the audience’s enthusiastic reaction to Crazy Camel at the Maison de la Culture du Japon in Paris in 2012, and his company went on to perform the same kinpun (gold-powdered) show to similarly great effect in 2013 at the Montpellier Dance Festival in the south of France and the Festival Automne en Normandie in and around Rouen in the north, before returning to Poitiers in west-central France last May.

Ironically, though, as the golden dancers helped make the captivating art form of butoh familiar to European theatergoers, Crazy Camel was never staged in its original home of Japan.

“In the early days, Dairakudakan used to do short kinpun shows, mainly in cabaret theaters, and we toured the length and breadth of Japan with them,” says Maro, who explains some of the history of the golden butoh. “Back then, its main purpose was simply to earn money in order to keep (the troupe) going and buy equipment.

“Performing in places where people were drinking and having fun, however, also trained us, as dancers, to remain mentally, as well as physically, strong. The kinpun shows really supported butoh culture and were a very important part of its history.”

As the 1970s gave way to the economic boom of the ’80s, however, many cabaret theaters closed as nightlife trends changed, and soon kinpun shows could only be seen at Nagoya’s famous annual street-performance festival. Just when the sparkling butoh variant seemed to be teetering on the brink of extinction, groups of Dairakudakan dancers calling themselves “goldens” began performing at local street-performance festivals — and from there they soon found themselves invited as special guest acts at wedding ceremonies and other parties.

In Tokyo, goldens began performing at the annual spring Koenji street-performance festivals, and the popularity of the shows led to media coverage that helped the dancers attract even bigger audiences, which included many viewers who had never seen butoh before.

Kinpun shows that started as side projects of the dancers, it appeared, turned out to be an effective way of attracting a new audience to the company’s regular, white-painted indoor butoh performances.

“When our bodies are entirely covered with golden powder, people imagine the dancers as statues of Buddha, warriors in armor, androids, characters from a Terminator movie or other non-human creatures,” Maro explains. “So it’s a simple means to help expand the imagination. I suppose that’s why many people love the kinpun shows so much.

“Someone once told me it was just like seeing the hundreds of statues of Buddha at Kyoto’s famous Sanjusangendo Temple magically stand up and start to dance.”

For the Paris world premiere and subsequent shows of Crazy Camel in France, Maro says that he created an hour-long version of the work, which was inspired by Antonio Vivaldi’s violin concerto, The Four Seasons. When asked about Japan, though, he says, “In this staging, I especially want to emphasize the splendid effect of the golden powder, so I expanded the story and I’ve tried to express the magnitude of the venue, the vast expanse of the main stage at Setagaya Public Theatre.”

Those heading to see the show can expect something dazzling and unique. Maro has not only added several scenes but he has also asked the renowned contemporary jazz shakuhachi flute, player Keisuke Doi to write new music for the program.

This post was originally featured in The Japan Times on January 23rd 2016 and has been reposted with permission. 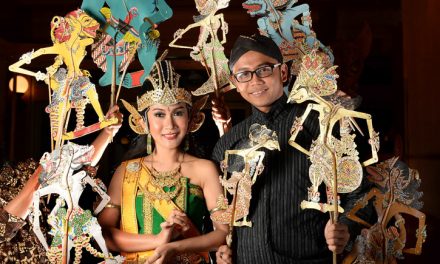