Alison Bell as Emma, making the long, counter-intuitive journey from despair to hope, is perfect in every way. Shane Reid

Some plays are ruled by a single word. It burns through their action, dark as pitch. Watching them is like being dropped into a volcano: sulphurous delineation of a problem; then a moment of extinction, when the drama evaporates in a cloud of ash. Screw Plato.

This is truth as playwrights see it. Not laid out in philosophical textbooks waiting for 40 minutes of polite discussion, but ripped from the flanks of flawed humanity, dumped on stage in a bucket of bones and blood.

The State Theatre Company of South Australia’s (STCSA) production of Harold Pinter’s Betrayal which has been running in Adelaide and Canberra, opens in Melbourne this weekend.

The plot, with its autobiographical origins, is basic, dealing with a seven-year affair involving Emma and Robert, a married couple, and Robert’s best friend, Jerry. Yet from this simple premise comes forth a situation of unimaginable complexity.

The word ruling this play is “when”. When did Jerry know that Emma had told Robert, her husband, of their affair? When did Emma know that Robert knew, and decide not to tell Jerry, but continue it? When did Jerry decide he would not leave Judith, his wife, and was this the catalyst for Emma to say, while pregnant with her son, Ned, that Robert was the father, not Jerry?

Was the failure to leave their marriage partners the real betrayal? Or did the real betrayal lie in the fact that, ten years on, Jerry is more put out by the fact that Robert knew of the affair – and that Emma knew he knew because she told him – than the affair itself, now that the marriage is over anyway, and Emma is seeing a third man, Casey, who Jerry and Robert both despise?

A precise, pursuant logic runs through Betrayal. Events concatenate, like ripples in a pool into which a body has fallen. One lie begets another lie, begets another, begets a world of falsehood that assumes the status of alternative truth. Either we change or it changes us. Perhaps we convince ourselves it is the truth, that our inability to declare it openly makes it a private truth.

There isn’t a word in the play you can’t find in a local newspaper. The language is entirely plain. There are the usual Pinter pauses and ellipses, stories within stories that bend back on themselves without telling you what you think you need to know (as if people had reasons for doing the things they do).

But ordinary language provides an abundant resource for the varieties of mendacity that structure human relations. It takes a certain kind of person, in a certain kind of situation to say, “I don’t think we don’t love each other”.

In its icy prevarication, it lays hold of what is left of feeling like a skeleton hand. It is what we say when we are backing out, replacing passion with semantics, covering the mess of our lives with a perfectly structured double negative.

Meanwhile, our souls spoil in a waste of shame. Emma gets it worst. She is the most culpable, but she pays the highest price. The others have the mercy of egotism. She is cognizant throughout, like a patient awake on the operating table.

It is not true, as people will tell you, that Betrayal is a play told backwards. Stage action is only intelligible when presented forwards. What is possible is to arrange scenes in reverse order, so that some information is released only after its consequences have played out.

Of the nine scenes in Betrayal, six so appear. Three are subsequent to the action of the previous scene: scene two, when Robert tells Jerry he knew of his affair even earlier than Emma admitted – and that it is possible Judith knew as well; scene six, when Emma, having confessed to Robert while on holiday in Venice, returns with a tablecloth for the flat she and Jerry keep on the side; and scene seven, lunch between Robert and Jerry in which Robert might confront his friend with his knowledge of the affair, but doesn’t.

Instead, he tells him a story about reading Yeats alone on the island of Torcello and wishing he could stay there forever.

This production of a very great play by the STCSA is beautiful, clarified, and haunting. You will be relieved to know it is “excellent”. More to the point it is right. It knows the damaged emotions it is faced with and plumbs them skilfully, like a surgeon draining a wound.

All the performances are assured. Alison Bell as Emma, making the long, counter-intuitive journey from despair to hope, is perfect in every way.

In the post-world-war Absurdism that Pinter’s characters inhabit, God may be dead but the world still resonates with biblical finality. There is a Fall, but a contemporary Fall: loss of feeling; avoidance; excuses; the pursuit of profit while everything festers. Now we can’t even get that far. Back then at least we knew when we were acting badly. 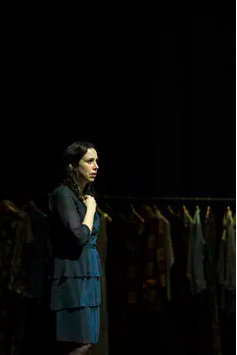 Today that category of behavior seems ambiguous, even empty. Damnation has become discomfort, forgiveness has become indifference. Got a problem with that? Start a blog.

But in Betrayal there are no blogs. No iPhones, no Facebook. No multiple, online personas. Only suffering and awareness, in unequal degree. The unfashionable Modernism that marks Pinter’s oeuvre is not so much a choice of form – endlessly pastiched – than a sensibility, an unwillingness to let go of the small, flickering flame we call our moral compass.

Betrayal is a play that happens twice, once in front of your eyes, once in your head, when you revisit certain scenes to judge their proper weight. A full list of these incandescent moments would take too long to recount. And it is subjective anyway. So here’s one of mine, small enough to miss.

Scene four: drinks at Robert and Emma’s; Emma offstage, with Ned, Jerry and Robert onstage, talking. What we don’t see, but will see later, is that Robert knows about the affair, and Emma knows he knows. What we don’t see, and will never see, is what this means exactly because she has not given him up, and Robert tolerates this, and so does she – Robert knowing, Jerry not knowing he knows.

Casually, Jerry says he will be taking a trip to America. He has not told Emma, and when he leaves it is clear this is devastating news for her. She then turns to Robert for… what? Punishment? Pity? Comfort? Is it possible – that a wife would turn to her husband for solace when her lover casts her off?

God knows. What is true, what makes Betrayal a luciferous study in motivations and consequences, is that Emma loves Jerry. And her love cuts a channel so deep the banks of her life collapse into it. Love is the force that both authorizes the betrayals in Betrayal, and makes them devastating and destructive.

It’s hard not to read a wider allegorical meaning into all this, a pointed lesson for our ethically compromised world. Those wondering where Pinter’s later politics came from can start with Betrayal. It is a perfect example of playwright Joanna Murray-Smith’s recent observation that “plays about nothing […] have always been the cornerstones of political insight”.

Of course the personal is political. All betrayal starts with betrayal of the self.

This article first appeared on The Conversation on August 26, 2015, and has been reposted with permission.