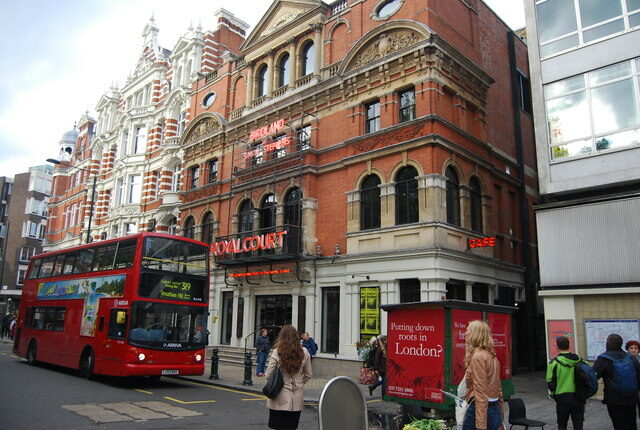 The Theatre Times interviews Ola Animashawun, Artistic Associate at The Royal Court Theatre and one of the project producers on The Royal Court Market Stall in Pimlico to learn about their work engaging the community in London.

The Theatre Times: Opening a market stall to promote theatre may sound like a slightly unusual idea to our international readers. How did you come up with it?

Ola Animashawun: Well we knew we wanted a local presence, something to raise our profile on the ground within the local community and to announce our arrival, whilst creating something that had a sense of continuity and permanence. This led us to the idea of a shopfront, i.e. something designed to attract attention, promote wares and is usually strategically positioned so that a lot of people will pass by as they go about their everyday business. However, some research quickly revealed that a shop would be way beyond our budget, besides, we didn’t have anything to sell per se. It was then that we thought of a market stall as the logical, economic alternative and it felt like the perfect way to literally announce our presence, face to face.

T.T.T.: We came to visit you and thought it a fantastic place. How is working with the locals going?

O.A.: It’s going great, we couldn’t be much happier in that respect. People have responded to the stall with such enthusiasm and interest. It’s quite inspiring.

T.T.T.: What activities do you promote at the stall?

O.A.: The main thing we promote is the theatre itself, as Pimlico’s local theatre. So, if you like theatre then really you should be getting yourself along to the Royal Court, as it’s within walking distance for anyone who lives and /or works in Pimlico. In terms of the stall itself, on a weekly basis, we offer an ‘Espresso Playwriting Service’ whereby members of the public can commission a one-page play, written for them by one of our ‘writer baristas’ and expertly served up and delivered within 10 minutes. It is a new, fresh and original piece of dramatic writing. There are also 6 short radio plays, ‘Pimlico Playground’, written by Royal Court writers and recorded by actors from the local secondary school Pimlico Academy. Each piece is bespoke and inspired by the children’s playground just behind the market stall. Members of the public borrow our headphones and a MP3 player and spend 20 minutes wandering around the playground as the drama is played out in their ears. We also have free play scripts from past Royal Court productions that we give away and we run ‘instant’ how to write a play 10-minute workshops. We also ask everyone who stops at the stall to make a wish for Pimlico. We’ve got quite a wish list now. It was important to us that there was no exchange of money involved in all of these activities, we’re a market stall with a difference! What we want to do is exchange ideas – ours is the currency of culture, creativity and the imagination.

T.T.T.: What is your three-year plan for the stall? Have you already identified any adjustments to the project?

O.A.: The stall itself was always intended to be a temporary phenomenon. In terms of the three years the plan is to engage with the local community and in particular local artists of all persuasions, with a view to infusing and energizing the local arts and culture. Over the past 12 weeks we’ve built up quite a database of local artists and interested parties, and the next stage is to call a big meeting with all of these people to find out what they want to do in terms of our stated aim of energizing the local arts and culture scene.

T.T.T.: Have you already experimented with a similar project in the past? When and where? How did it work?

O.A.: We have always taken our work beyond the Royal Court, from touring productions to primary and secondary schools to our previous community-led work ‘Theatre Local’ where for one project we took over a shop in the Elephant and Castle shopping mall and offered audience members ‘pay as you like’ tickets to see Debbie Tucker green’s play Random.

T.T.T.: What other programs have you developed to engage your audiences?

O.A.: This project extends to another area in north London, Tottenham. We are hosting a series of events and performances to take place across Tottenham this summer. It is part of our three year engagement with community groups, artists, young people and businesses in the area. This July we took ‘Primetime’ our project for young writers aged 9 – 11 to primary schools in outer London boroughs. The children took part in writer workshops alongside professional performances of plays that other young people in that age bracket had written in the previous years writing workshops.

T.T.T.: We have previously featured your international program on our site as part of a spotlight section on Chilean theatre. We, as an international theatre organization, are especially fond of your work, as I’m sure you can tell by the content we have been publishing. So our question is: What drives you to present international theatre in such a closed scene as London?

O.A.: If, as you say in your question, that London is a closed scene then that is precisely why we present international work. In George Devine’s opening blueprint for the Royal Court he stated that the full range of international work should be available to our audience. So the Royal Court has always felt that responsibility to look outside its immediate context and engage with the world beyond the UK. But this has been a particular focus since Elyse Dodgson founded the International Department in the early 90’s and started to work with playwrights from all corners of the globe. Now we feel a real hunger in our audience to hear authentic stories from the world, giving them an insight into lives they haven’t directly known but which are intrinsically connected with theirs.

Thank you very much, Ola and The Royal Court Press and Publicity people for taking the time to reply to our questions.