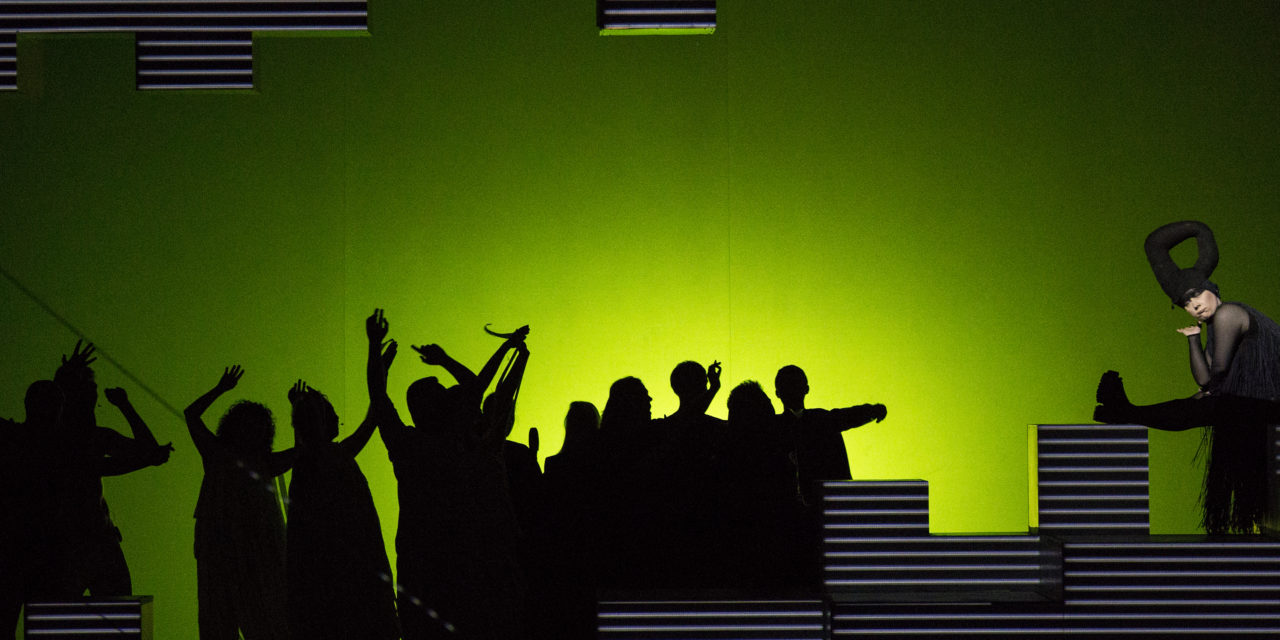 “A long, long time ago…or maybe not so long ago…in fact, quite recently, there was a boy named Omar”–this is how Jolanta Góralczyk (as the National Conscience) opens Yemaya–Królowa Mórz [Yemaya–The Queen Of Seas], the Wrocław Puppet Theatre production about the refugee crisis aimed at audiences six years old and above. Throughout the next hour, children will build a relationship with Omar (the phenomenal Agata Kucińska) and experience a colorful adventure. Many of their parents and minders (and the current author) will struggle to hold their tears as they see a father (Igor Kujawski) waiting on a shore for his son who was taken by the sea. This image evokes the death of Alan Kurdî, a three-year-old Syrian boy who drowned in the Mediterranean Sea in September 2015. The picture of Alan Kurdî that made global headlines was a direct inspiration for Małgorzata Sikorska-Miszczuk to write the play. Resonating with audiences of all ages and raising issues that few theatres in Poland engaged with, Yemaya is a production that should be invited to all major theatre festivals, especially those aimed at young audiences.

Małgorzata Sikorska-Miszczuk, known internationally for her collaborations on the multilingual play Europa (2013), wrote a multi-layered play that Martyna Majewska staged with a great sense of empathy, playfulness, and theatre aesthetics. Yemaya tells a story of a five-year-old boy, Omar, who lives with his father. Omar loves daydreaming and talking to flowers, neither of which his father approves. One day, Omar wakes up and his city is gone, taken by the war. Omar and his father must escape on a boat over a big sea. During the journey, a wave washes Omar off the boat and he finds himself underneath the sea in the magical kingdom of Queen Yemaya (the superb Marta Kwiek). By the end of the show, Omar will have to decide whether to stay with Yemaya or return to his father. 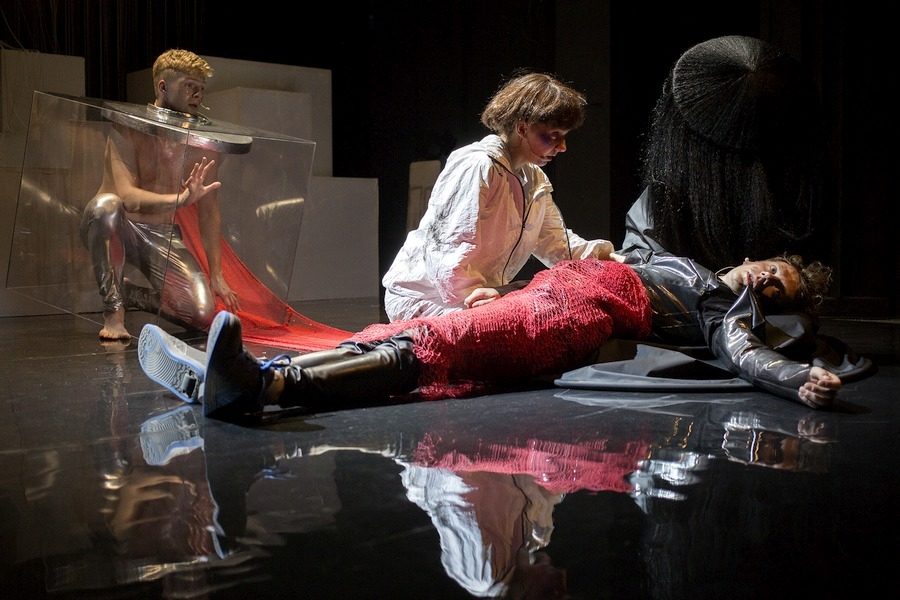 The story offers plenty of topics for post-show discussions with children, including not only refugees but also religion (Yemaya is a goddess in the Yoruba religion), masculinity, ecopedagogy, animal rights, and foreignness. The only death that the audience witnesses is that of the extremely entertaining Shark Gogo (Grzegorz Mazoń), who slides around on Heelys shoes. Gogo dies harmed by fishermen who cut off his fins. There is also a precious moment when the Dinosaur Molecule (Sławomir Przepiórka) teaches the audience to pronounce Omar’s name using a made-up language. In other words, through double-foreignization, he makes Omar’s “foreignness” familiar. This challenges the idea of language as unique to humans, which is also evident in the fact that Yemaya-Kwiek often communicates through vocalizations that remind one of a dolphin’s language.

“We are all on the same boat…”

Music by Dawid Majewski (brother of Martyna) plays an important role in the production. As the world under the sea is filled with singing, it helps to balance Yemaya’s socio-political, entertainment, and aesthetic values. Majewski’s music is also a key signifier of the dramatic space, evoking the sounds of the sea and complementing Anna Haudek’s scenography. Haudek uses mostly white, black, and silver colors, supporting the parable quality of Yemaya, evoking the colors of the oceans, echoing the myths of Aleppo as the white city, and providing an ideal background for Jakub Lech’s multimedia projections. 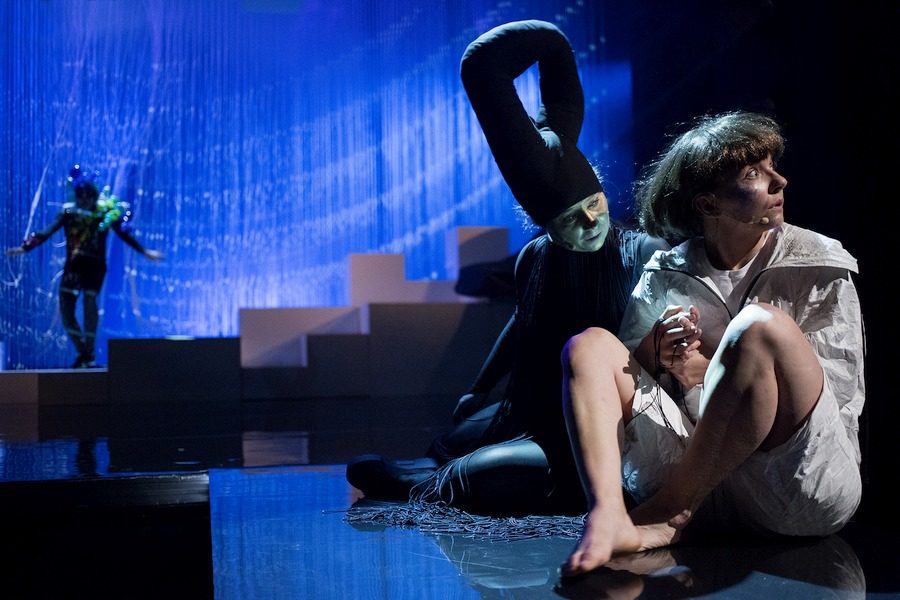 There is also a platform that projects from the stage into the auditorium. Kucińska and Kujawski use it as a boat for Omar and his father. This positioning of the boat gives much strength to Omar’s line, delivered as Kucińska looks around the auditorium: “There are so many people on this boat. We are all on the same boat…” The line–in the context of Poland’s refusal to accept any refugees from Syria, including orphans–lingers in the theatre space. The immediate relevance is also highlighted, as Omar’s father (Kujawski) and the National Conscience (Góralczyk) never leave the stage, remaining respectively downstage right and left. The two figures remind the spectators of the individual tragedies and ask about collective responsibility. As pointed out by one of the reviewers: “How, after a spectacle like this, could an adult tell his child that Omar and his dad might love the environment and are generally cool, but one should not help them to find a new home?” (Bryś 2016). This is particularly so, as Omar-Kucińska pleads in the finale of the performance: “When I will be flying over your place, let me in, if you have some space…”

The audience’s engagement with the story is enhanced by the highest-quality individual and ensemble acting. Marta Kwiek and Agata Kucińska deserve a special mention. The former metamorphoses into a being that cannot be simply described in human or animal terms. Her energy and voice fill the stage. Kucińska’s performance in Yemaya was described by the Polish critic Jacek Sieradzki as a “masterclass”. Watching her Omar, one forgets that one sees an adult woman. Her body, gestures, and voice transform into those of a shy and naive boy. As the production premiered when the theatre celebrated its 70th anniversary, it was a special touch to feature Anna Proszkowska’s voice as the Heart of the Ocean. Proszkowska is the legend of Polish puppetry theatre as an actor, director, and educator. She has trained generations of Polish puppeteers, including many of the actors featured in Yemaya. For many, she remains the heart of the Wrocław Puppet Theatre.

*All translations are provided by the author.