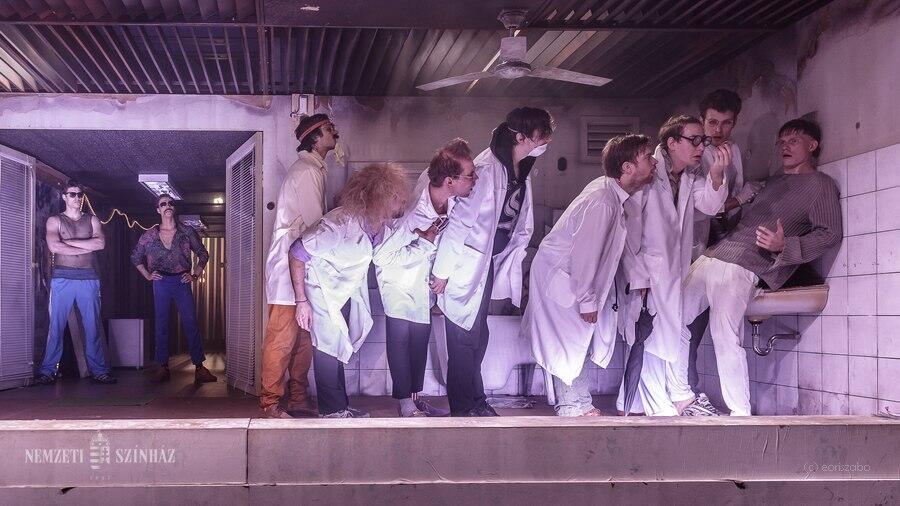 Buchner’s “historically difficult explains modernity” in the performance of Woyczek by the National Theater of Hungary (Nemzeti Színház) sets the region on fire to the great delight and admiration of the audience.

“Once upon a time there was a poor child with no father and no mother everything was dead and no one was left in the whole world. Everything was dead and it went and searched day and night And since nobody was left on the earth it wanted to go up to the heavens and the moon was looking at it so friendly and when it finally got to the moon was a piece of rotten wood and then it went to the sun and when it got there the sun was a wilted sunflower and when it got to the stars they were little golden flies stuck up there like the shrike sticks ’em on the blackthorn and when it wanted to go back down to earth the earth was an overturned piss pot! and was all alone… and it sat down and cried and there it sits to this day all alone.”[1]From “Full text for Woyzeck, as printed in the Woyzeck 2002 program. Photography by Hansen-Hansen (Erik Hansen/ The Ocular One); Posted by Bai Hao via Academia.

That is Woyczek. A hero of morality and virtue. The protagonist of the classical drama of the same name by Georg Buchner from 1836. This stage play form first appeared with a performance at the Residence Theatre in Munich in 1913. “Since then, Woyzeck has become one of the most influential and often-performed German plays. Due to its unfinished nature, the play has inspired many diverging adaptations.”

National Theatre from Budapest (Hungary) and famous regional theatre director Attila Vidnyánszky put a group of young actors together to make a creation of the whole new dramatic Woyczek that has been since 2018. followed everywhere with great long applauses, shock and laughter. Powerful sound and light effects, claustrophobic scenography, great talent, crazy improvisations and unbeatable literature made the auditorium’s life extraordinary for two hours of experiencing this storytelling play.

The famous play by Buchner depicts the alienation of the main stage hero concerning a world that is not favorable to him. Today, every person is a Woyczek because of pop culture, TV series, films, commercials, and YouTube channels… The media have brought stories about superheroes, which people are not, and which we must not admit to ourselves that we are. The show and reality collided dangerously and switched roles so that the man is utterly lost, and the question is in collision with what (reality or imposed fiction)?

“When we started rehearsing this play, our textbook consisted of only four pages,” says the actor Nagy Márk, who plays Woyczek in the play, “but Attila (Vidnyanszky Jr.), our director, said that we will build our play utilizing improvisations. We worked on it for two weeks – improvising, and then we started putting the different parts together. Before this play, I had already worked with Attila (Vidnyánszky Jr.), and we collaborated at the university. But I was still afraid because this role (Woyczek) is a notorious, world-famous role. Many famous actors have played Woyzeck before. I didn’t get too much text, nor did I get too much instruction. I was only 23 years old and only a fifth-year university student. But it helped me that in the play, around me, there were all young actors who were still students like myself or they just finished their studies a year earlier. We knew each other very well and worked well together. Attila (Vidnyánszky Jr.) told me I should not act in this play as in some kind of realistic drama. My first and primal task was to find or create a spiritual tension through which I could react to this crazy world that Attila (Vidnyánszky Jr.) built around me on stage. I realized that I actually had two tasks: To create tension and to react to the world around me that was presented by all the other actors. Last week of practice, I managed to assemble the finished parts and was ready, calmly waiting if one of my colleagues decided to improvise a new illusion, a new idea. During the four years since the premiere, we played this play many times, we were in Romania, in Israel, here we are in Novi Sad (Serbia), and we played in Hungary not only in Budapest but also in other cities. To be honest, I have fear before every performance. How will the audience react to our madness? But when the play starts, I always start feeling confident that the audience will understand why we act like this and that they will perfectly understand the message to the world of this play.”

Actor Tamás Kovács said the following about his experience working on this play:

“Lots of the scenes you saw in the performance we didn’t do during rehearsals, but outside of them. For example, the scene when Roland Bordás enters at the beginning of the play when you can’t understand what he’s saying. It all happened one day when we went out for a beer after the rehearsal when Roli (Roland) asked us if we knew about that video on Youtube where the monkey takes a Kalashnikov and starts shooting at people. We told him we didn’t know about it, and he started imitating a monkey. We died out of laughter. After that, a day or two passes by when Attila (Vidnyánszky Jr.) says at the rehearsal: ‘Come on, Roli, now play that monkey.’ That’s how we built the scenes. I think that my generation receives so much information from all sides that we are all very nervous because of it. Because of that, we cannot concentrate at all. And for those reasons, our generation is already starting to fall apart. The premiere of our play was four years ago and I think that, although the play has developed over time, the world has already reached the chaos that we projected and that reigns in the play.”

God turns off the Sun when a dark night arises in the performance of “Woyczek” by the National Theater of Hungary. The whole world fits into a small studio apartment and becomes a TV soap opera, a Spanish series, a reality show or an advertising program. The entire and complete life becomes an illusion. South American “The Truman Show” from the bunker. Actors enter the stage from the TV and refrigerator, through the walls and the famous star “Chacahaito”‘s wall poster. With props from a Chinese department store, they evilly spy on the audience through the blinds of a dilapidated and ramshackle apartment. They tumble, fall, and destroy the theatrical illusion of wind and shipwreck with a room fan and similar things, all searching for something to do, finding an occupation. The tango of death and the salsa of passion are played. In the meantime, the Freemasons from the shadows and darkness are conquering man, humanity and the world of Woyczek. It seems today is a masquerade. There are no dreams because nightmares have replaced them. The audience is presented with an ideal that has long since ceased to exist, making life irreversibly lose all meaning. The theatre team that worked on this play understands the psychological state of a man in the modern era and decides to indulge in the absurd, giving the tragedy a very comical status.

As Stella Adler, an American actress for the ‘New York Times in December 1992. said: “The word theatre comes from the Greeks. It means a place of seeing. It is the place people come to see the truth about life and the social situation. The theatre is a spiritual and social x-ray of its time.”

The audience, positioned very close, right next to the actors, in a cramped box, a paper house, feels the scene breathing all the time. The wall is fragile. The scattered harmony is the same and unique for the theatre and the auditorium. Every movement, every tremor with every word reverberates like frequency multiple times through the cramped and narrow space. The first-class superb and energetic madness of the performers with skillful acrobatics and neon lights where under them they, at the same time, dance and rot pour into the audience. It’s all of us. But man was made of flesh and blood to dream nightmares. The human psyche and human psychedelia, the complete surreality of the real world and life are happening to all of us. Heroin and the Bible. The realization that there is blood on the moon as well. In the mouse hole, a super-savior is born, while Woyczek, who talks to himself at everyone’s persuasion, becomes the killer of the woman Mari, the mother (wife) and her newborn. The theatrical or realistic play takes place in the house, in the battle for meaning and the Sun, blessing and peace victims come to the surface. The interpretation of innocent children’s play is presented with the song “Stop Children What’s That Sound” by Buffalo Springfield, the overall music arranged for the play by Szabolcs Mátyássy is ingenious. And the human (Woyczek’s) brain (colored cauliflower) is plucked alive, taken out, thrown, and rolled into pieces, witch parts are everywhere. While this is going on, the actors encourage the audience to endure, that they must endure, just a little more, just two minutes when everything will be over. The actors ask the audience to calm down, announcing that the non-existent end of the performance will soon come.

​​”Is the world meaningless because the main character is crazy, or is the main character crazy because of the meaninglessness of the world?” It’s up to you to decide. The audience of the play “Vojcek” in Novi Sad, at the 49th INFANT, littered with newspapers, peas, plastic, cans, confetti, and pieces of the human brain (grey-brown colored cauliflower), was amazed and will return to this play in their minds for a long time, questioning own feelings, thoughts and ideas,  entire reality and existence, with the intention of reaching some kind of true meaning of itself, of our relationship with others as well as the purpose of us individuals and human existence in general.

We are always on stage, even when we are stabbed in earnest at the end. 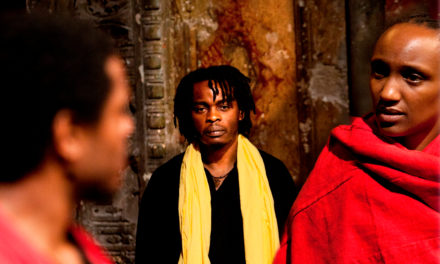 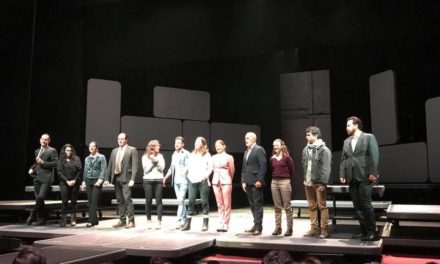