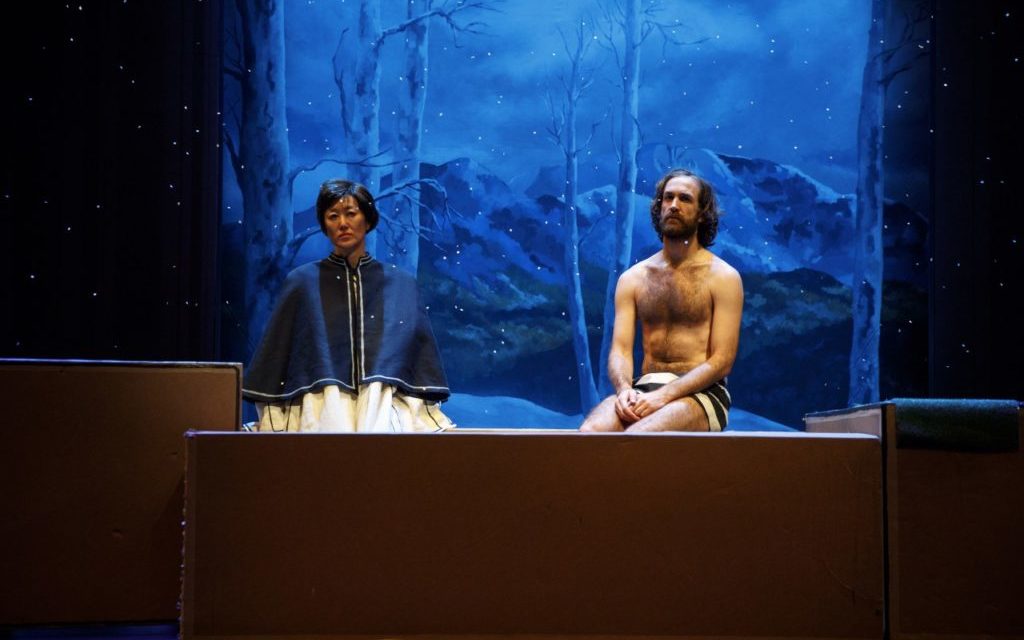 Rude Mechs, an Austin-based ensemble in their twenty-first year of collective creation, recently appeared at the Yale Repertory Theatre. As is their wont, Rude Mechs’ production is a reshaping of a work whose ideas, characters, potential for humor, and updating appealed to the group. The consensus is de rigueur in the running of this company.

Field Guide, commissioned by Yale, is an unusual adaptation of The Brothers Karamazov now in its third iteration. Its source is the Constance Garnett translation of Dostoyevsky’s novel which runs to more than a thousand pages while the play is eighty minutes long. It is striking that the script manages to tell as much of the story of the Karamazov family as it does, although at times it feels a bit spare and occasionally crammed. The current version combines scenes and characters drawn from Dostoevsky’s novel interposed with stand-up comedy.

Early on, actress Hannah Kenah, who is responsible for the finished script, stands behind a microphone and in front of a red curtain and tells a long series of deadpan jokes, some of which foreshadow the action. Stand-up returns later in the play in the body of a bear (Lowell Bartholomee) who complains about his unfair father, and once more in its surprise ending. Direct connection between actors and audience is customary in Rude Mechs’ shows. Movement, dance, and music also play an important role. Symbolic and often funny (e.g. the Bear) Russian touches are added to the production.

The first scene introduces the main theme, the difficulties of family life. At the opening, we meet the four brothers and their selfish, vulgar, immoral, and alcoholic father Fyodor who left their upbringing to his servant Grigory (Hannah Kenah). Everyone sits in silence involved in their own thoughts. Ivan, the philosophical and atheist brother (Thomas Graves) is moved to perform a magic trick in which a book levitates. This is followed by the levitation of Alyosha (Mari Akita), the youngest, most forgiving, naïf, and religious brother. Alyosha yearns to become a monk.

Smerdyakov (Robert S. Fisher) Fyodor’s unacknowledged illegitimate son stands at a distance holding a toy cat. Dmitri (Lana Lesley), a womanizer like his father, enters and soon after a monumental family quarrel breaks out. The scene ends with Dmitri threatening to murder his father. Dmitri, in love with Grushenka (Hannah Kenah), needs money to pursue his relationship with her and to repay his former fiancée Katya. Fyodor refuses him.

Hannah Kenah returns in the brief interlude with her mic to analyze family madness. “Getting together. Doing the same things, repeating the same behaviors, again and again. Expecting different results.” In this play the source of family madness is the behavior of fathers who are detached, controlling, and angry.

Props come to life in the Box Dance where a group of cardboard cartons realign themselves to become a hot tub, the contemporary version of the Russian “banya.” Cardboard has long been used by the Rude Mechs for building sets and creating props, since it is inexpensive, strong, and can easily be adapted for scenic needs.

Ivan, wearing baggy black and white striped trunks climbs onto the edge of the tub where he is joined by Alyosha dressed in a long and full white robe covered with a short royal blue mantle. The two sit pensively against a beautiful blue background with birch trees and falling snow. Brian H. Scott’s lighting is impressive throughout.

Ivan describes a poem he conceived to Alyosha who asks to hear it. He obliges and delivers a shortened and simplified rendition of Dostoevsky’s famous The Grand Inquisitor. Despite its brevity, Ivan’s argument in Field Guide disturbs Alyosha’s faith. Later their father taunts Alyosha’s belief telling him in crass terms his dying teacher and spiritual guide Father Zossima will stink after his death.

In one of the production’s most beautiful and moving moments Alyosha, alone onstage, dances to express his grief, spirituality, and longing.

The third family scene seems to be a Rude Mechs’ satyr play. Once again, the boxes are moving, this time performing magic tricks. Fyodor has turned into a goat and eats books, bleats, and looks as if he is defecating onstage. Appropriately, Ivan is wearing a devil’s tail. Dmitri’s former fiancée Katya (Hannah Kenah) enters and Ivan who has been silently in love with her throughout the play caresses her with his tail. Fyodor gives a speech that no one understands and leaves through a death door.

The last scene takes place at a dinner party upstage. Missing are Dmitri and Smerdyakov. In biblical fashion, the actors eat bread and drink wine. They read sections of The Brothers Karamazov aloud.

Shawn Sides’ direction is to be commended. The actors’ performances are strong. Lana Lesley, complete with mustache and beard, is a very convincing angry and passionate young man. Lowell Bartholomee’s Fyodor is cruel and disgusting, while his bear is very funny. Thomas Graves brings believability and sophistication to Ivan. Hannah Kenah makes each of her four characters distinct.

The Rude Mechs’ Field Guide played at the Yale Repertory Theatre from January 26 through February 17, 2018

This article originally appeared in Capital Critics’ Circle on February 18, 2018, and has been reposted with permission.