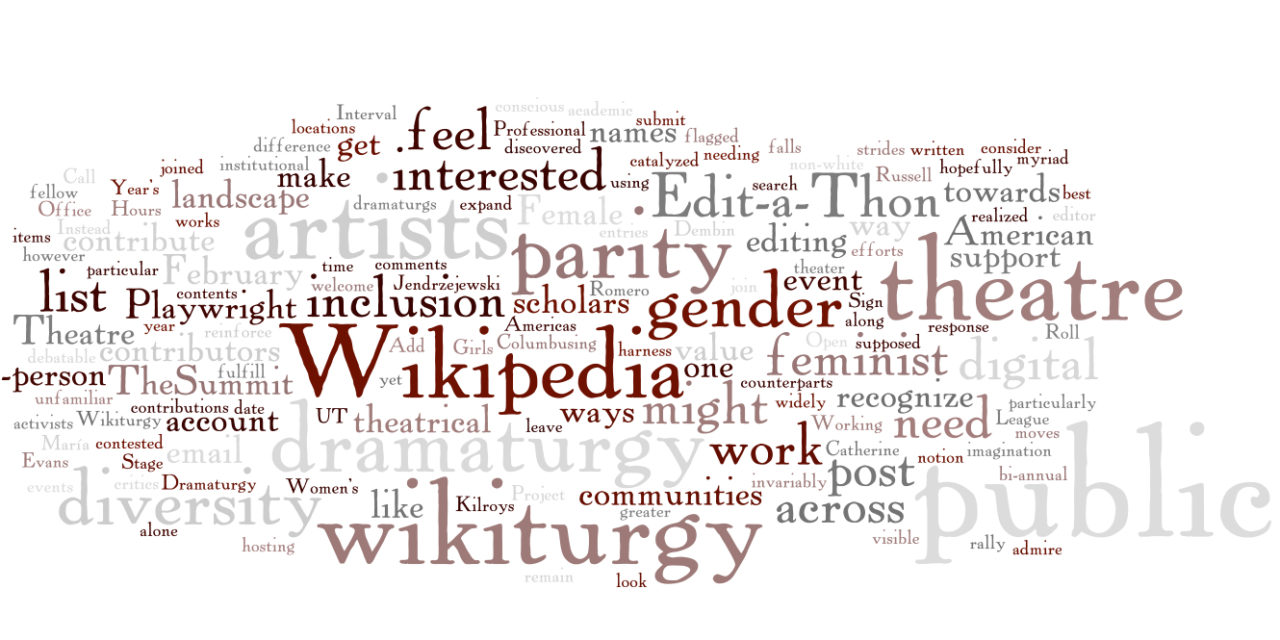 Last year, on February 17, the online theater world exploded following candid remarks regarding gender parity in U.S theater at a panel discussion that became known as #TheSummit. This year, on the one-year anniversary of that event, #WikiTurgy. Organized by three innovating dramaturgs, Jules Odendahl-James, Catherine María Rodríguez, and Russell M. Dembin, #WikiTurgy will serve as a day of digital intervention with an eye towards improving the public’s access to theater knowledge with a particular focus on parity and diversity. This internet-wide Edit-a-Thon is open to anyone and everyone who would like to help make Wikipedia’s theater coverage more inclusive. Odendahl-James says, “We’re calling on dramaturgs to think about what they do in the theater as connected to a larger discourse.”

The project began at a conference of the Literary Managers and Dramaturgs of the Americas (LMDA) in Vancouver two years ago when Odendahl-James did a presentation for the University Caucus on Wikipedia as a dramaturgy teaching tool. At the following year’s conference in Boston, Odendahl-James ran a session, which Dembin attended, about the specifics of editing Wikipedia with a dramaturgical bent. Taking the lead from other larger scale Edit-a-Thons for gender parity, Odendahl-James contacted Dembin and Rodríguez. Though they’d never directly worked together, the trio knew each other thanks to their active presence on social media, through online channels like Rodríguez’s work on the Dramaturgy Open Office Hours Project. And, being dramaturgs, after identifying their common interests, the three “dramaturg’d” the idea until it was ready to launch. Dembin says, “Two traits that unite us are that we are all enthusiastic about public dramaturgy, bringing our skills and excitement out into the community, and about the inclusiveness and diversity of the theater community.”

This focus on inclusiveness is a central tenet to the #WikiTurgy project. Although the original focus on gender parity (due to Odendahl-James’ background in other feminist interventions in Wikipedia), the trio quickly realized that the conversation needed to open itself up to all types of under-represented voices absent from Wikipedia’s pages. They developed the idea around the feminist principle of “intersectionality,” which means working across many communities of difference at the same time. Rodriguez says, “The invitation is broad because we are very consciously not wanting to limit people’s imaginations. The key words are parity and inclusiveness. Anything you feel that is underserved and deserves a spotlight gets attention on the same day.” Odendahl-James adds, “We are intersecting with people who are interested in raising visibility, and doing it in a public, digitally archived way.”

Others have hosted similar Edit-a-Thons: Adeline Koh (Director of Digital Humanities, Stockton College) intervenes via Wikipedia to improve the visibility of global women writers and post-colonial feminist theorists (Koh and the late Adrienne Wadewitz were Odendahl-James’ inspiration for the notion of a dramaturgical Edit-a-Thon), and the New York Public Library’s Schomburg Center for Research in Black Culture recently hosted a Black Lives Matter Edit-a-Thon on February 7, as part of their programming for Black History Month.

According to a recent study published by the Cornell University Library, even the smallest intervention in Wikipedia’s content has profound effects. The purpose of #WikiTurgy is two-fold: Not only does it provide an important opportunity for dramaturgs and theater practitioners around the world to take ownership of advocating for work that is important to them, but it also enriches the viability of Wikipedia as a resource for those who are looking for a baseline of information about theater. Odendahl-James admits that it took her several years to warm to the idea of editing Wikipedia, or even consider it a potentially valuable resource. However, she now says, “I would rather make Wikipedia better, and make it a better resource for fellow dramaturgs instead of just saying, ‘You should never touch Wikipedia, it’s really terrible.’”

Realistically speaking, Wikipedia is one of the most accessible and widely used sources of popular knowledge online. As Odendahl-James says, “There’s no excuse. If we don’t include our artist in that Wiki-forefront of knowledge, they’re lost. In the way that information is gathered and relationships are built, it’s a way to get our artists onto a larger stage. There’s no reason why people can’t find that information.”

All three dramaturgs admit that their relationship with Wikipedia has changed over the course of their careers, particularly since they started developing this Edit-a-Thon. Rodríguez says, “When I talk about dramaturgy research, people comment that it must be so much easier now because everything is digital. Yes and no, because there is so much information you have to wade through to find what you’re looking for from a reputable source. Wikipedia is a culturally accepted place to turn for quick information. There’s something political about that. It’s so easily accessible with just an internet connection, and even if the writing is being curated by scholars, it doesn’t fall into pitfalls of academese; it is still easy to access and to comprehend.”

Whereas all three were previously wary of the viability of Wikipedia as a dramaturgical resource–Dembin goes on to say it’s often perceived as “that ‘monster’ that you want to discourage people from using”–they have all come around to appreciate its accessibility for theater practitioners and general audiences alike.

Theater makers love to talk about the numerous “pipelines” between people in places of privilege and places of power, from London to Broadway, from Broadway to regional theaters, etc. The notion of the pipeline, as it exists, is concerned with peer-to-peer direct sharing, domineered by a withholding spirit. Rodríguez says, “Parity is about cracking open the supposed pipeline, releasing the floodgates, and recognizing that we have resources at our fingertips. It’s about calling everyone to be a voice and share, to expand relationships beyond the one-to-one.”

#WikiTurgy aims to explode the extant pipelines by creating room for more voices to be heard and more information to be easily accessible, allowing for new relationships to spark and thrive.

In terms of the logistics of the day, Odendahl-James, Rodríguez, and Dembin will each be hosting local editing sessions from their respective cities, and tweeting throughout the day to share their progress. Odendahl-James will be working out of the Chapel Hill Public Library in North Carolina, and Dembin will be located at the University of Texas at Austin’s Oscar G. Brockett Center for Theatre History and Criticism. Several groups will also be hosting their own editing sessions, such as a class of dramaturgy students from Carnegie Mellon gathering at the Helen Hunt Library. Other gatherings will be happening at Columbia University’s Butler Library and the University of Maryland. Participants across the web will be live-tweeting using #WikiTurgy to track and share their progress throughout the day.

If you are interested in participating in the Edit-a-Thon on February 17, you can find a list of the meet-ups that have been scheduled across the country here. If you participate, be sure to use #WikiTurgy to mark your progress on Twitter over the course of the day, which will help the reverberations spread beyond the immediate communities of participants. You don’t have to be a dramaturg to chip in, as the #WikiTurgy project is hoping to enlist as many and as varied a team of editors as possible. Rodríguez says, “Recognizing the diversity of voices is really important. While we could make it our mission to do the work ourselves, it is more expedient to involve others and include diversity of perspective and opinion.”

If you are interested in getting involved but don’t have time on February 17, send an email to wikiturgy@gmail.com for answers to your questions and help connecting you to other people in your area who are participating in the Edit-a-Thon. Even if you can’t do it on February 17, the #WikiTurgy team is eager to act as matchmakers to connect potential editors within their communities, because you can always edit, even without a special day!

Long-term, the #WikiTurgy team hopes that the Edit-a-Thon will become a recurring event. They encourage all participants in the February 17 Edit-a-Thon to incorporate this type of work into their regular practice. They see potential for overlap with various “designated” months where national attention is paid to underrepresented groups, e.g., Black History Month (Feb), Women’s History Month (Mar), Asian-American History Month (May), and American Indian Heritage Month (Nov), as the Edit-a-Thon continues to evolve. But as Odendahl-James says, “As dramaturgs or theater scholars, we already have an incredibly long game plan, it doesn’t have to be one day or one month a year to attend to inclusion.”

The overlaps between dramaturgy and technology are endless. Odendahl-James, Rodríguez, and Dembin all have incorporated technology into their practice, not only through sharing their findings on social media (as self-identified “Twitterturgs”) and Wikipedia, but also through archiving their research digitally so that it is easier to share it with colleagues. Odendahl-James calls it “activist dramaturgy,” saying, “We’re the ones looking at who’s getting programmed. How can we help champion emerging and too-often overlooked playwrights? The social media domain is emerging and thriving and an active part of my dramaturgical practice.”

The #WikiTurgy team is very active on Twitter and would love to hear your with thoughts, questions, and contributions to the project. Their handles are as follows: 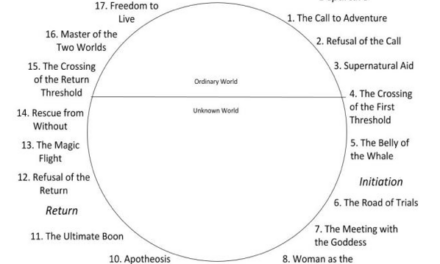