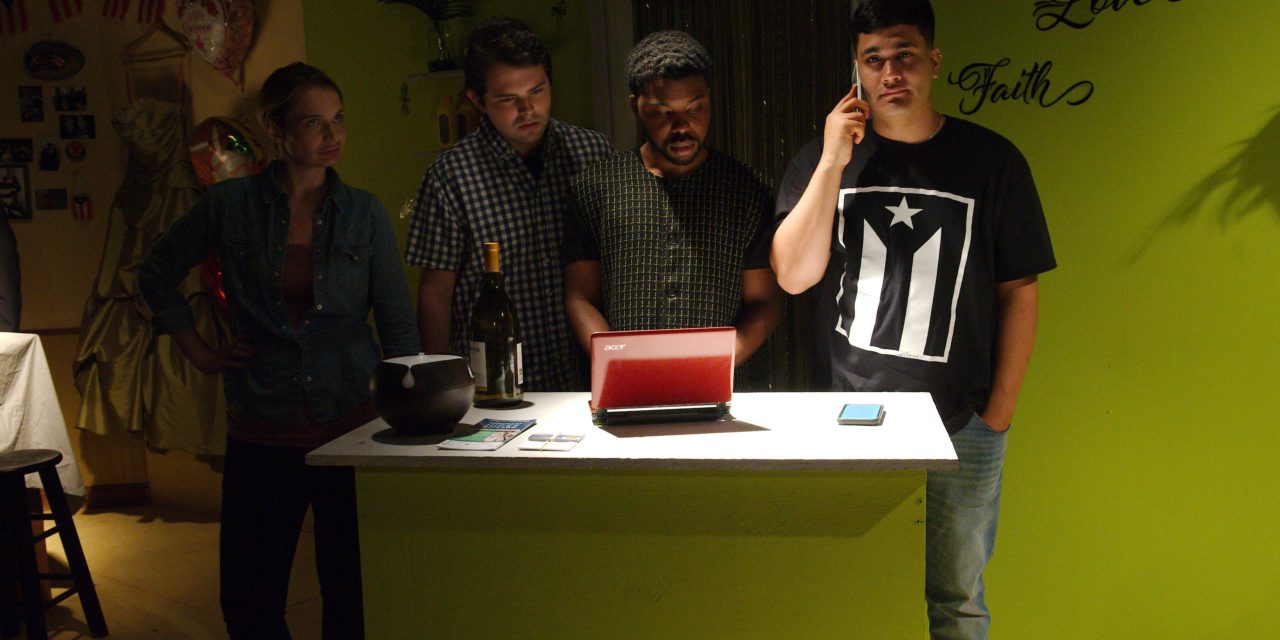 The cast of "Not For Sale" at UrbanTheater Company. Photo by Anthony Aicardi.

One of the core components of the Latinx Theatre Commons Carnaval of New Latinx Work in July 2018 was the inclusion of site visits to leading centers of Latinx art-making in the Chicagoland area. While theatremakers from across North America came together at The Theatre School at DePaul University to see six new play readings and learn more about the wealth of creative talent in Latinx theatre, it was important for conveners to experience what makes Chicago’s Latinx community so special. So, on Saturday, July 21, we all piled into buses and went out into the local community to meet the community. Whereas others went to Teatro Vista at Victory Gardens Theatre, Aguijón Theater, and the Chicago Latino Theater Alliance, I was fortunate enough to visit UrbanTheater Company in Humboldt Park.

Humboldt Park is the world’s only official Puerto Rican community. This fact is not lost on any visitor to the neighborhood. The famed Paseo Boricua—an 8-block stretch of Division Street complete with Puerto Rican eateries, community centers, and Puerto Rican flags seemingly everywhere—is flanked by two enormous 59-foot tall steel Puerto Rican flags marking the area as definitively Boricua and serving as an official gateway to the neighborhood. In the middle of Paseo Boricua sits UrbanTheater Company (UTC) at Batey Urbano. Founded in 2005, the company is the neighborhood’s resident Latinx theatre company and one of the nation’s most recognized young Latinx theatre companies. With the motto “From the Stages to the Streets,” the company is intentionally ingrained in the local community. Part of this intentionality includes telling stories that reflect the local community. As such, UTC’s 2018-2019 season is entirely comprised of stories that speak to the lived realities of Chicago’s Latinx community. 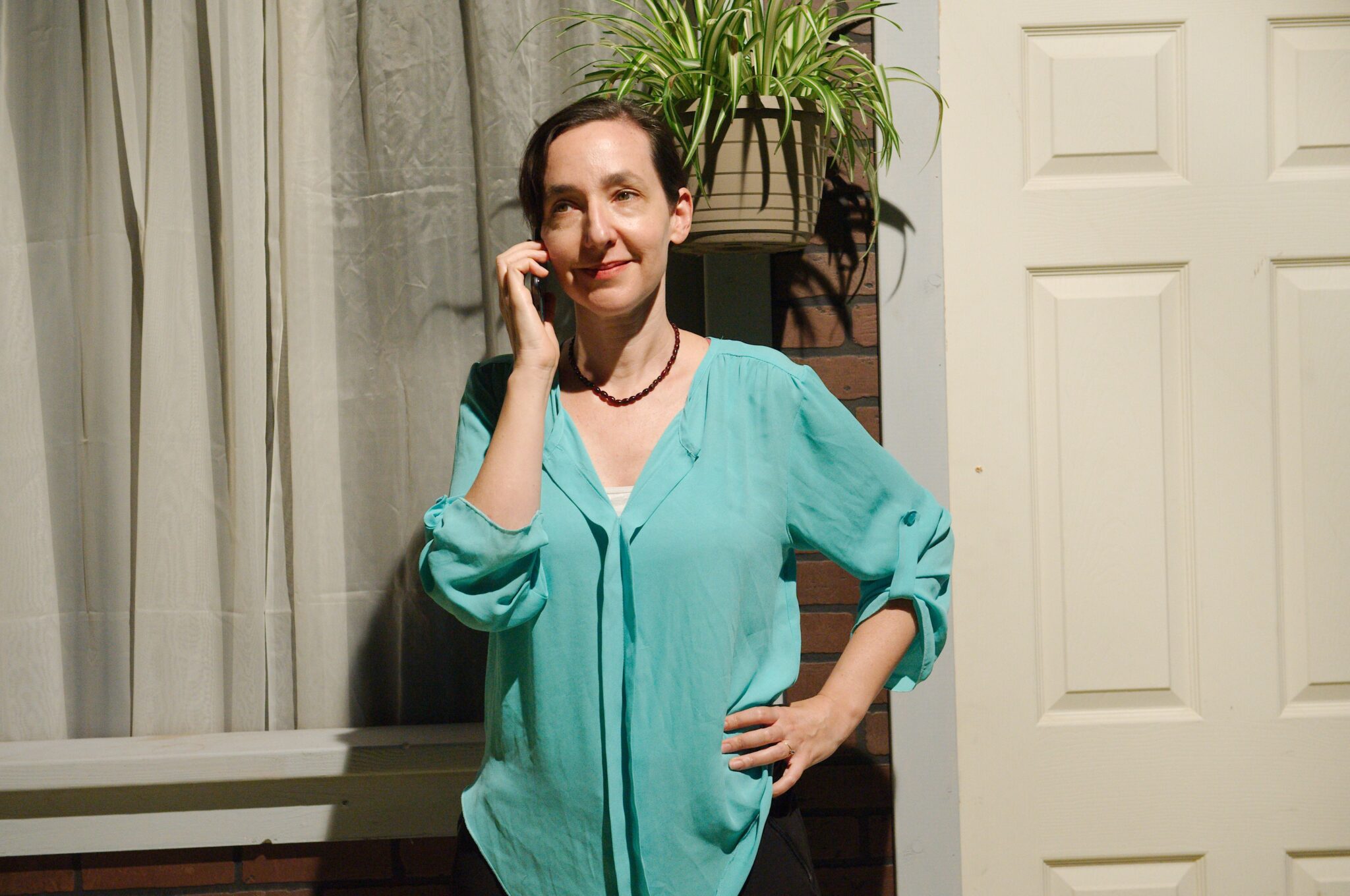 The cast of Not For Sale at UrbanTheater Company. Photo by Anthony Aicardi.

When Ivan Vega asked me to come on board, I began to look at UTC’s place in the local and national theatrical conversation. I thought about UTC’s tagline “From the Streets to the Stage” and started asking who and what streets are we referring to. I am a Chicago native, our Executive Director is a Chicago native and our company manager is a Chicago native. And then it hit me: they are our streets, our city. We should be telling our communities’ stories from first-hand experiences. We should be a part of archiving Chicago history through the arts.

And, while UTC is thriving and despite the unparalleled sense of Puerto Rican identity that saturates Humboldt Park, the neighborhood is not immune to the forces of gentrification. This is precisely where UTC’s next production, Not For Sale by Guadalís Del Carmen, grounds itself. Running from September 21 to October 20, 2018, Not For Sale was commissioned by UTC and is being produced in association with DESTINOS, the second Chicago International Latino Theater Festival, which will feature over 14 plays from Chicago, the United States, and Latin America is venues all across Chicago. Notably, the play is the company’s first commissioned play, signaling a particular belief in Guadalís Del Carmen’s value as a playwright.

“I couldn’t be happier that our upcoming season is dedicated to Chicago playwrights and Chicago stories. It took thirteen years to commission our first play,” affirms UTC co-founder and Executive Director Ivan Vega, adding, “I’ve admired and believed in Guadalís del Carmen’s talent as a playwright for more than ten years and it brings me so much joy that our season will kick off with this world premiere.”

As a Chicago native, Del Carmen has seen how gentrification has changed the face of the Windy City:

Aside from the obvious displacement of businesses and people of color, I think one of the unique things about Humboldt Park is how Puerto Rican it is. It’s like with every push for change, some of the cultura wanes. The Puerto Rican Festival used to be about 2 weeks and was cut down to three and a half days. That’s a true sign of the times.

Having grown up in Humboldt Park, Miranda González shares these sentiments,

As a Chicago Native, it’s difficult to watch the neighborhoods you and your friends grew up in change. Watching the swings where first kisses happened to be changed into a dog park or homes that your family grew up in torn down makes them feel like they never happened. It’s erasure of generational memories.

In Not For Sale, Del Carmen tackles these exact issues. With the Puerto Rican Festival less than two weeks away, the Humboldt Park community is thick in preparations for the annual event. When Mark and Susan move to the block and open up an upscale health food store, those who have lived in the neighborhood must decide to work together in the face of change. Will they embrace the new face of Humboldt Park, letting go of the legacies of their ancestors? Or, will they resist change? Showing the various personalities comprising the neighborhood, Not For Sale presents the nuances of community, family, and politics, ultimately asking us who truly gets to claim a neighborhood? 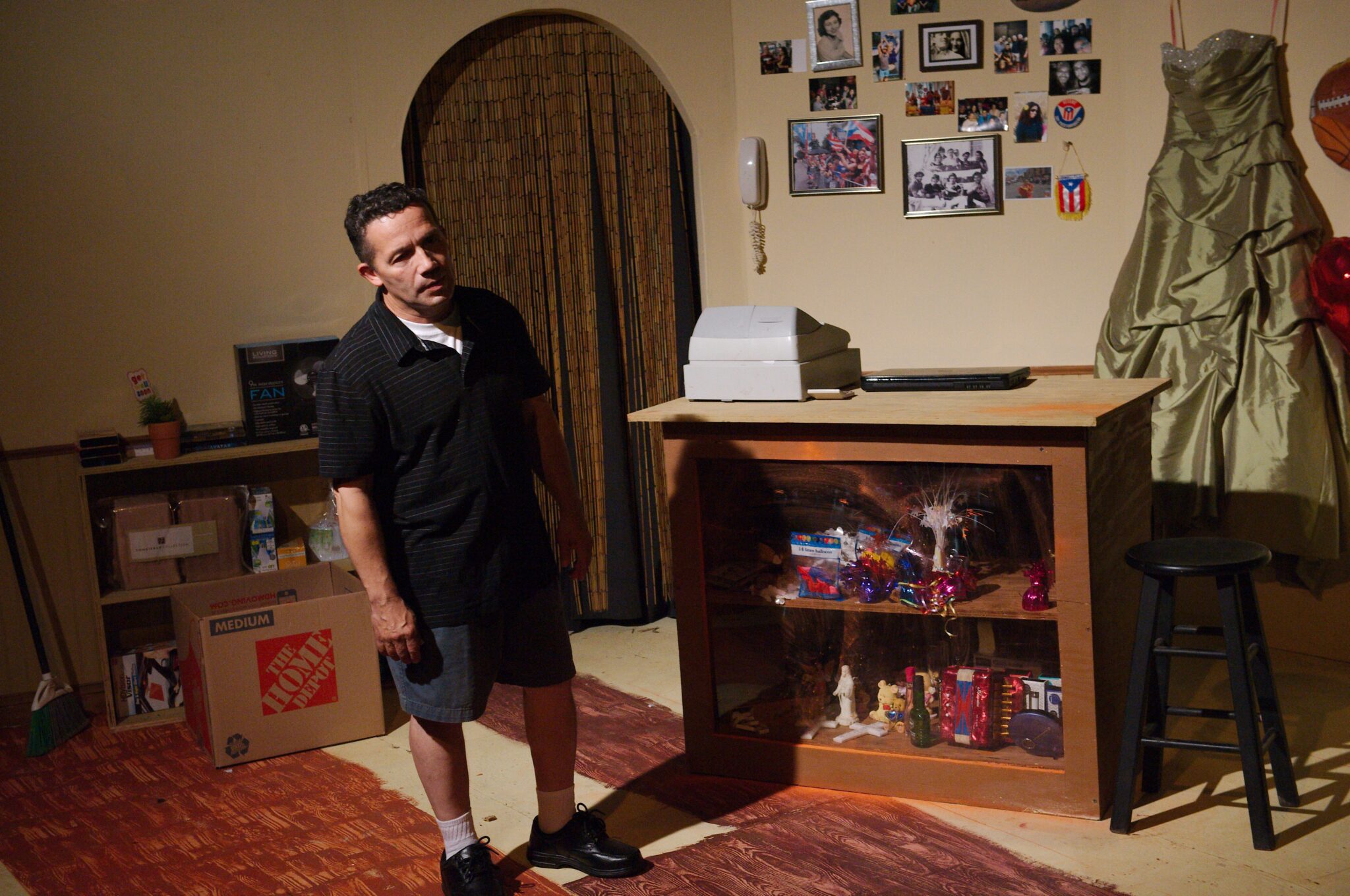 The cast of Not For Sale at UrbanTheater Company. Photo by Anthony Aicardi.

For Miranda González, Not For Sale was the story that had to be told right now and Del Carmen was the perfect playwright to pen the script. González notes:

The idea of the play came to me because of incidents that kept happening at our space during rehearsals for other plays. The neighbors would complain about the noise, at noon on Saturdays or 8pm on Friday nights and they were consistently white. I remember telling Ivan “we are within our right!” I actually found it hilarious and thought to myself what would these folks do if they lived here in the 90’s! I remember picking up my girlfriend Janice and having to YELL on the sidewalk to the second floor apartment on Division Street so she could open the door, at 11PM! It was the only way she didn’t have a working doorbell.

The rehearsal incidents were not the only things occurring in the neighborhood. A person named Susy Q on an online public forum was protesting the Puerto Rican Festival that had been celebrated in Humboldt Park since the late 60’s. The Humboldt Park Advisory Council was being led by a racist woman who was attacking the community on social media and in online public forums ( see here). These events that made me realize we had to begin an unapologetic discourse concerning gentrification. So I called up Guadalís and asked if she would be interested in writing about two storefronts in Humboldt Park. As a Chicago Native herself, she understands the importance of neighborhood identity and the loyalty we feel to the communities that shaped us.

For Guadalís Del Carmen, the play’s intentions are two-fold. Hearkening back to the origins of Latinx theatre-making in the United States and social justice theatre in general, Not For Sale is meant to both reflect the local community as well as educate audiences about the realities of gentrification. Del Carmen affirms:

I want Puerto Rican and all Latinx audiences to hear their story, and I want non-POC audiences to understand why this neighborhood is so important. Blood was shed and tears were wept for this neighborhood. Those steal Puerto Rican flags on Division Street are representative of what people are fighting for in Humboldt Park and in Puerto Rico. But I also want folks to understand that there is so much politics involved in what happens to a neighborhood, the change didn’t start when Starbucks opened up on the corner. 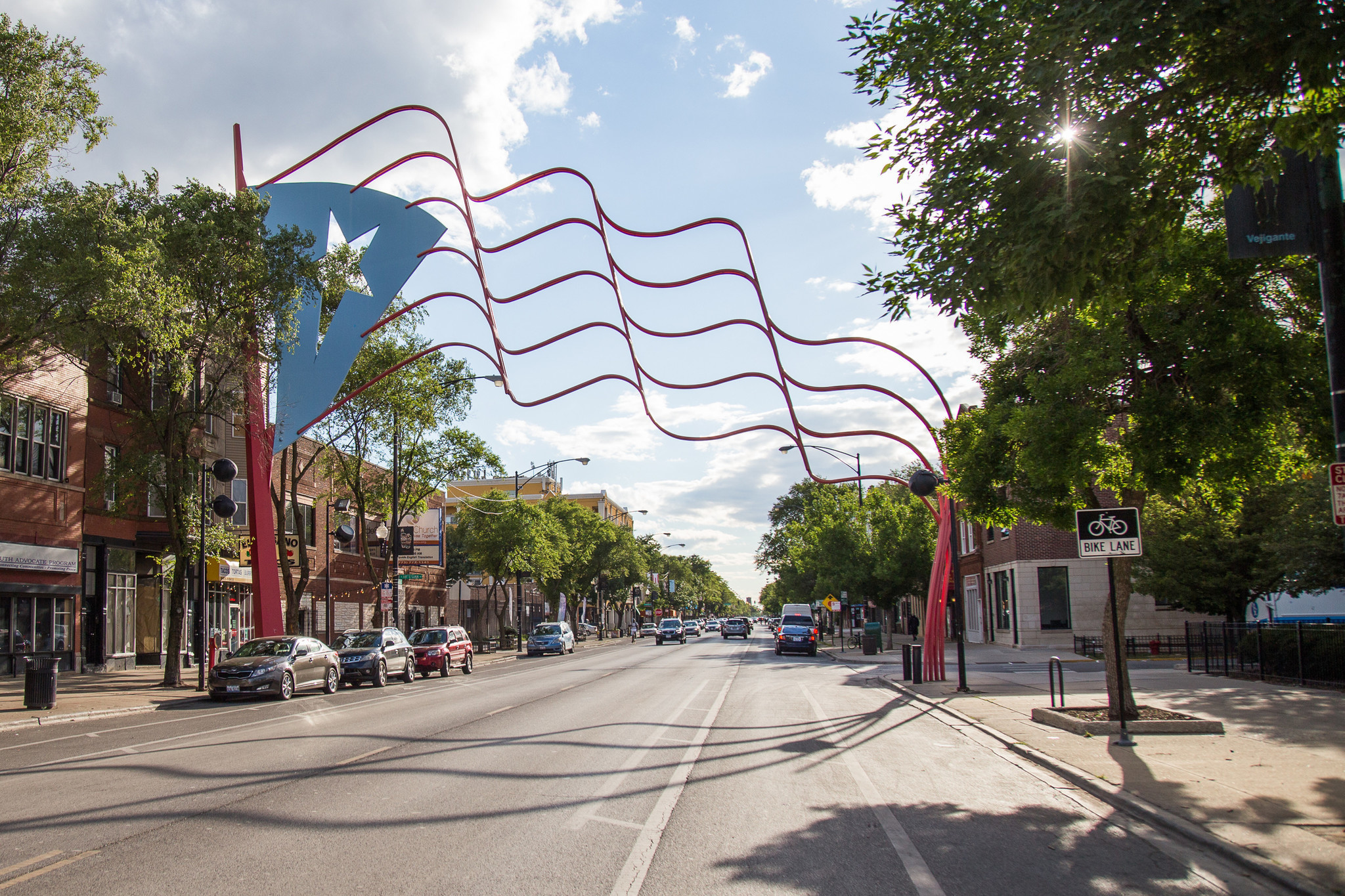 Ultimately, Not For Sale speaks to the importance of theatre-making that is socially embedded in its local community. While Del Carmen’s play could be successfully produced just about anywhere, there is a certain sense of urgency that exists with the play being produced in the very community with which it engages. While audiences make their way to UTC, they are quite literally confronting the very issues that Not For Sale tackles. Seemingly simple acts such as seeing a play at UrbanTheater, buying artwork by Cuca at Café Colao, or eating coconut oatmeal at Nellie’s are anything but simple. These things are the heart of Humboldt Park. These things are the fabric of the community. In Not For Sale, Del Carmen shows that this fabric bleeds blue, white, and red. Then, now y despúes.

Performances of Not For Sale are scheduled for September 18 through October 20 at UrbanTheater Company, 2620 W. Division St., Chicago, IL 60622. for information visit www.urbantheaterchicago.org. $15-30. 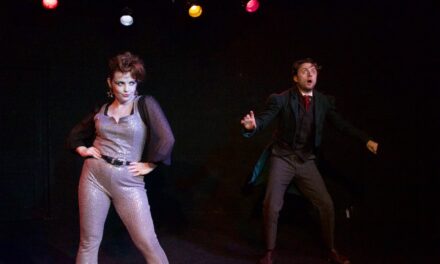