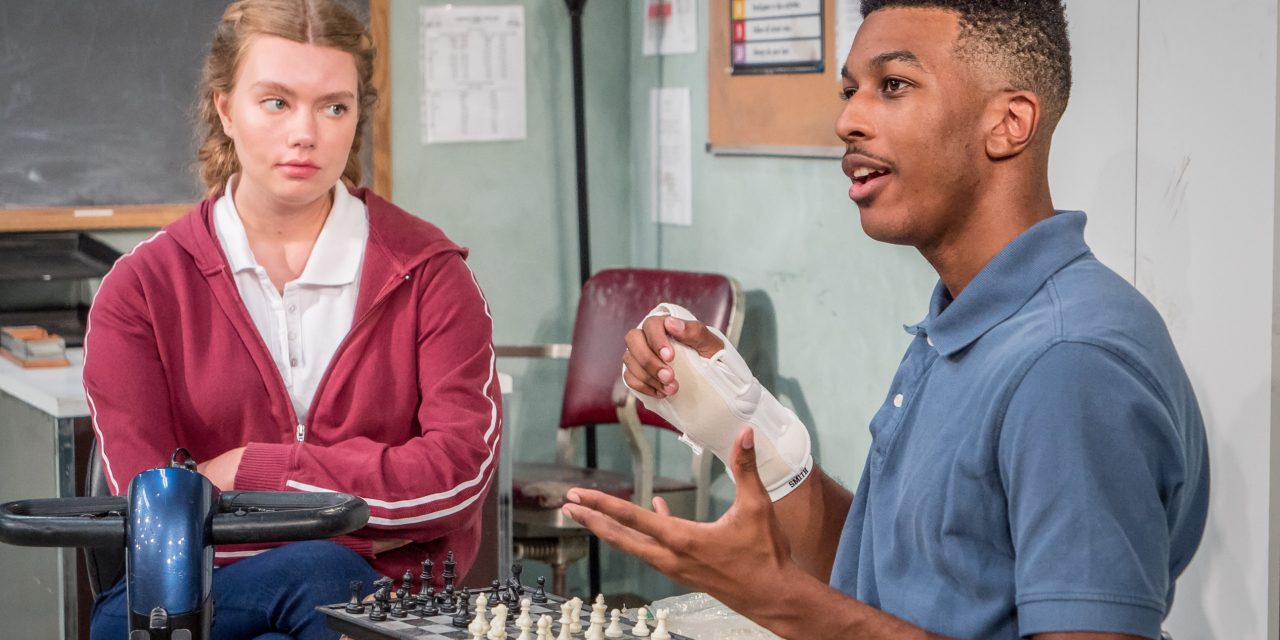 Nicole Pandolfo’s Brick City was produced in conjunction with NJPAC and the New Jersey Theatre Alliance and shown at Premiere Stages at Kean University. The plot follows Jessie and Darnell, two students at an underfunded inner-city high school who have problems at home and in school, as well as their teacher, Ms. Vega, who is struggling with reinventing her life.

The set–part boring classroom, hallway, outside hideaway cove, and parking lot–proved to be an excellent catalyst for character relationships to develop and flourish. With numerous spots where characters could interact, it was easy to see how certain conversations were only held in particular locations and how the play’s most intense moments were tied to this.

In fact, the two years that the playwright spent in developing this piece certainly shows when it comes to the characters, their overall development, and their relationships with each other–this was ultimately one of the strongest aspects of the play. 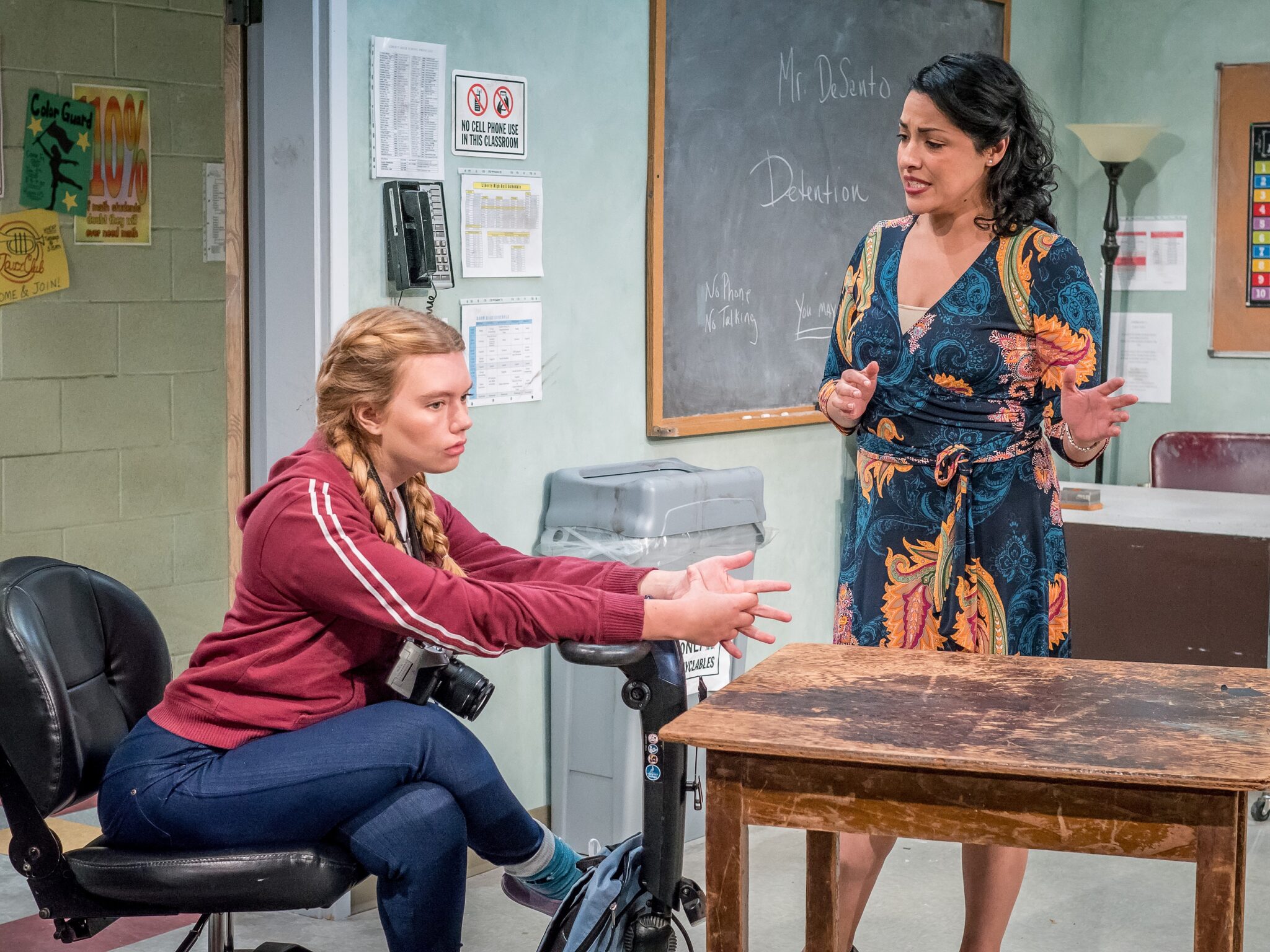 Jessie, played by Madison Ferris, and Darnell, played by Chris Grant, form an intense friendship originating from their placement in advanced study hall. At first, they seem to be opposing forces: Jessie is artistic, with an outspoken, sarcastic attitude toward almost everything, while Darnell is athletic, outgoing, and committed to his studies and to helping his family in any way possible. As time passes, they form a bond built on trust and understanding that lasts through the constant tribulations that life keeps throwing at them.

Their unexpected friendship could have easily slipped into something more romantic, as Darnell is a ladies’ man and fairly attractive, while Jessie is a girl in a wheelchair who believes that boys are scared of her. Pandolfo’s choice to keep them as friends serves an important purpose–that of ensuring that Jessie does not perpetuate the “someone is willing to date the disabled person” stereotype. Doing so would reduce Jessie’s value as a proponent to the story and make her into someone to be pitied.

The fact that Jessie has a disability is handled in a way that seems effortless, which is exactly how it should be. While she may struggle with keeping a door open and getting through with her wheelchair or complain about not having the proper desk in the classroom when she arrives, she is established as a person with likes, dislikes, thoughts, feelings, problems, and solutions–aspects that have nothing to do with her wheelchair. If there is mention of her disability, either it comes from her own mouth or she is in control of the conversation and where it leads–it is also only mentioned to further the plot. None of the other characters treat her differently because of her disability, and she never elicits pity from them or from the audience, another aspect that is difficult to bypass (even unintentionally) and which Pandolfo pulls off with ease. In this way, Jessie should be seen as a model for playwrights and theatre administrators everywhere–put the person before the disability, and if it must be talked about, let it be done by the disabled person themselves.

Brick City is only successful through its character development, character relationships, and the way disability is handled. The plot and its structure seem disjointed and clearly need more development. Some of the plot points, like Ms. Vega’s decision to take a teaching position at another school because the principal won’t allow her to teach certain classes, are abrupt and inconsistent with the characters’ previous choices. This abruptness also carries over to the endings of the scenes, when characters walk into the empty classroom for no apparent reason. Because those actions don’t make sense and are never addressed, they seem to be a device to hold the audience’s attention and therefore reduce the play’s merit. 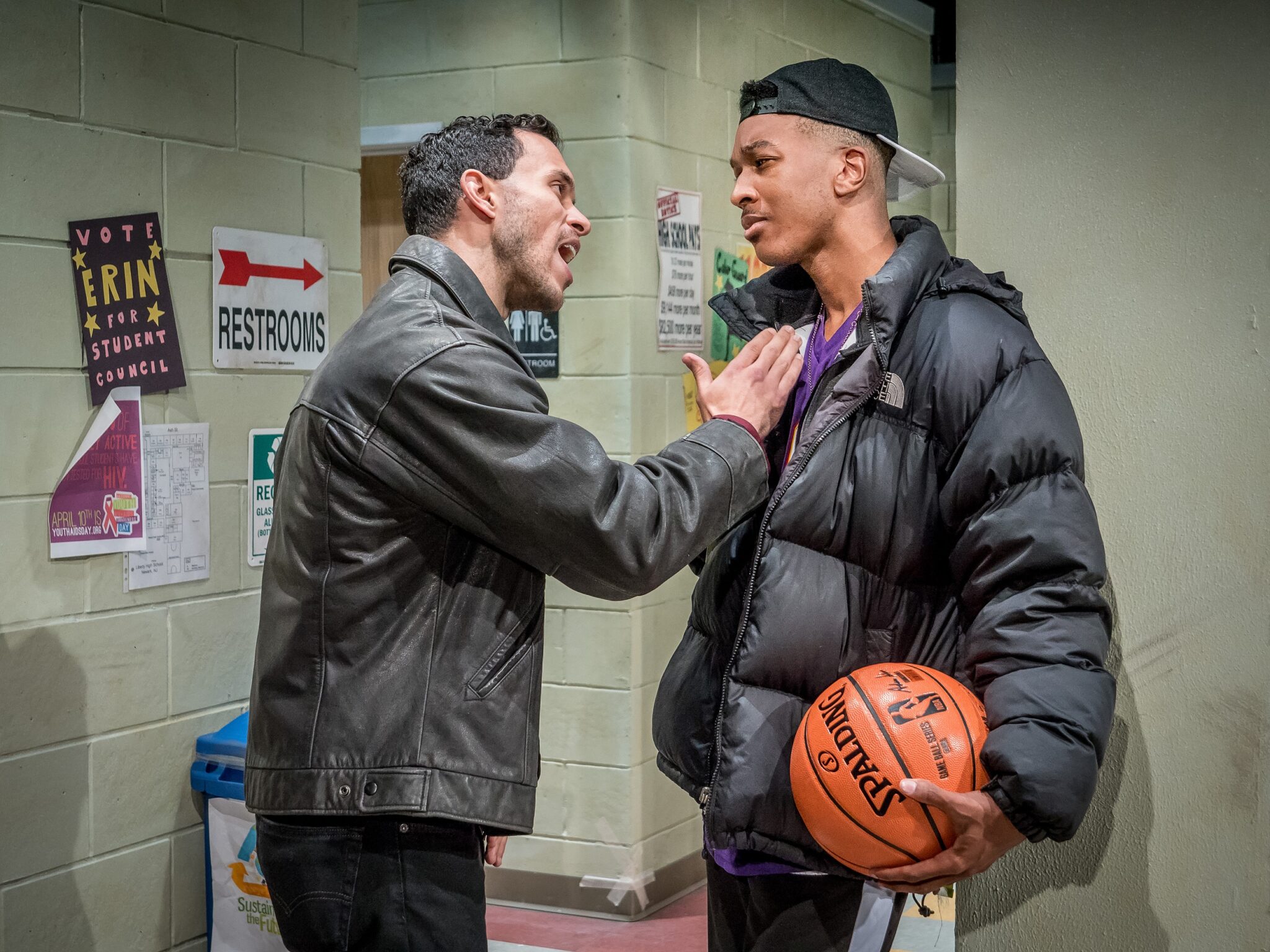 The structure of the play was also off, because it was nonlinear. A deviated structure added in with the intermingling themes of neglect, opportunity, and mental illness muddles and reduces them to insignificant pieces of the puzzle. If audiences are too busy putting together an event timeline to focus on the bigger messages of a show, something needs to change; in this case, a more linear structure would help establish some clarity.

While strong character relationships and a positive portrayal of disability (finally) certainly aren’t all that could go into making Brick City successful, these aspects are two big steps in the right direction. However, if the plot and structure continue to be developed and fine-tuned, the play could very well be on its way to success; in the meantime, future theatre-makers can take notes on how to diminish disability stereotypes and give disabled characters the voice they deserve.