I lost a night’s sleep recently over Forced Entertainment. I did it on purpose. They were coming to New York with one of their major marathon productions, something that had never happened before, and I had to see that in action. The piece was called And On The Thousandth Night, an eight-actor “durational” originally from 2000, which began at midnight at NYU Skirball Center and ended at 6 a.m. I lasted until shortly before 3.

FE excels in c (as I’ve described in Great Lengths), conceiving it as informal, game-based, decidedly slackerish, yet somehow world-embracing events that often hold audiences spellbound. They don’t expect people to watch the pieces from beginning to end. You’re encouraged to come and go, and Skirball had gallons of free coffee and other wake-me-ups obligingly on hand in its comfortable lobby. Some picnicking, milling and schmoozing took place out there, but remarkably enough, most people sat tight in the auditorium. About 120 of the 350-odd midnight spectators reportedly stayed until 6.

I wasn’t bored at all. The limiting factor was my body, which isn’t 25 anymore. I saw enough to be very glad the event happened and to affirm my conviction that this 34-year-old British company remains one of the most original, ingenious, aesthetically coherent, and consistently inspired experimental groups on the Euro-American scene.

The leaders of New York City’s big theater festivals—just to digress a moment—really ought to be ashamed that so little of Forced Entertainment’s work has been seen here. Their smaller pieces, for two or three performers, have played short runs now and then (Tomorrow’s Parties at Florence Gould Hall in 2016, Real Magic at the 2017 COIL festival), but the Skirball event was the first performance of a full-company FE work in the U.S. theater capital.

The reasons are depressingly obvious. Our most prestigious forums for innovative performing arts—e.g. the Lincoln Center, White Light, and Next Wave Festivals—are no less invested in celebrity, polish, and virtuosity than the commercial theater they purport to disdain. They just don’t know how to accommodate the wave of improvisatory, superficially mundane, anti-virtuosic work from recent years that has been variously called “real-life theater,” “theater of the awkward,” and “theater of the everyday” (which also includes Nature Theatre of Oklahoma, Goat Island, and Elevator Repair Service). For some reason, it doesn’t matter that this work is sometimes wildly popular. That it speaks a new kind of truth about our day-to-day lives and presumes to critique our received paradigms for excellence makes it vaguely threatening.

The frame of And On The Thousandth Night is a storytelling game. Or a storytelling compulsion. Or a purgatorial sentence of perpetual storytelling. Or something. The seven performers, wearing cheap red cloaks and cardboard crowns, take turns telling improvised (or sometimes memorized?) stories that all begin with the phrase “Once upon a time.” The stories range from flippant glosses on famous fairy tales and myths to movies, plays and TV shows to silly and serious love and horror stories to dumb jokes and quips. Each performer speaks until another says “Stop,” and the interruptions are evidently compulsory. No story is ever allowed to finish. These kings and queens are condemned to usurp one another ad infinitum and then be summarily deposed themselves.

The show’s title refers to the classic book 1001 Nights, which relates an act of marathon storytelling accomplished masterfully under threat of instant death. In And On The Thousandth Night, no performer has absolute power like the homicidal king in 1001 Nights, and none is particularly masterful or in greater danger than others, like Sheherazade. Nevertheless, there is a vaguely torturous undertone to the action, because the imperative to continue the game no matter what has been accepted by the whole company. Mental and physical exhaustion become a prominent part of the spectacle, forcing us to ask what exactly we are enjoying in the nonmetaphorical actor-breakdowns.

The show begins with the actors sitting on chairs in a line on the forestage. As the night wears on, though, they all take breaks upstage, withdrawing with their chairs whenever they feel like it to rest, sleep, or eat and drink at a refreshment table in the corner. These breaks mirror the banality and casualness of everything else. But they also have the opposite effect of heightening tension sometimes. If five actors take a break at once, leaving only two actively performing, there’s enormous pressure on them to stay sharp and inventive.

The “Stop” interruptions amount to story handoffs, and they are shaded with every conceivable mood and intention. They can be thrusts, parries, compliments, judgments, insults, deflections, defenses, and much, much more. They’re where you feel most sharply the knife-edge between collaboration and competition that the show rides on. It’s as if you’re catching privileged glimpses into the company’s real-world relationships. Tim Etchells, for instance, interrupts Cathy Naden at one point when her story is mashing up the plots of Alien: Covenant, Prometheus, and Interstellar. He says, grinning,

“Stop. Once upon a time there was an actor who couldn’t really remember a movie…”

At another point, Etchells, Robin Arthur, and Terry O’Connor have a quick-fire comic exchange that feels almost like a values-based argument over the complexity of protagonists:

No one owns material here, despite the constant pressure to invent. They often pick up on a tale just told, or told an hour or two earlier, redirecting and refocusing it, and to that degree, some sharing is unavoidable despite the selfish premise of the competition. They will often cut one another off just before a climactic word is uttered, or leave one another to dangle and struggle with a thread that has grown thin. But they will also flash anomalous generosity at times. The most gripping moment of the three hours I witnessed (which also felt like the greatest compliment possible among the company) was when the whole group’s attention was held for several minutes by a beautiful and surprising origin myth spun out by Richard Lowden.

And On The Thousandth Night is simple and clear in its rules but not at all simple in its implications. The same is true of all the other FE durationals. A mysterious alchemy occurs in these works as they cover so much experiential ground, without evidently trying to, that they come to seem like accidental epics. The inanities and wisdom and imaginative panache of the tales washes over us, we recognize the gifts and limitations of the separate performers, the opportunities and obstacles in the absurd performing circumstances. At the same time, we come to recognize all these conditions, qualities and people as constituents of a complex little world that feels weirdly complete in itself. The cracks and fractures in the childish game plan don’t feel childish or trivial in the end but open up to suggest immensities.

This article first appeared in Jonathan Kalb on September 18, 2018, and has been reposted with permission. 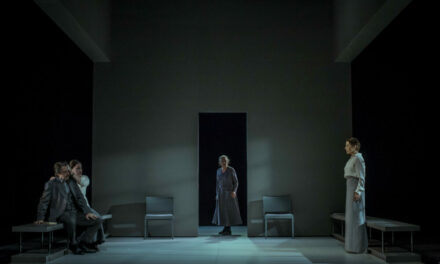