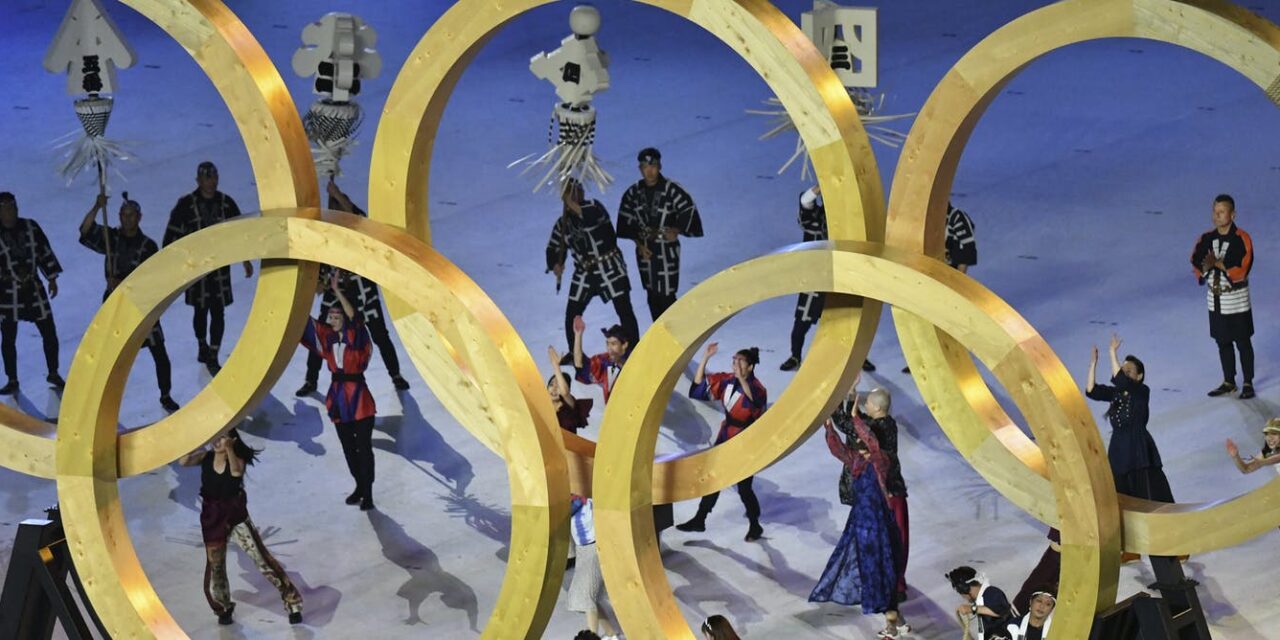 The Yomiuri Shimbun via AP Images.

The rising of the Japanese flag and the singing of the national anthem is the first moment of stillness. Devoid of external commentary, before a sea of empty stadium seats, it is a stark reminder of the pandemic.

More than any of the previous symbols of the “apart but not alone” theme, this image reinforces the optimism (misplaced for some, hopeful for others) of continuing with the games despite the obstacles wrought by the pandemic. The rising of the Japanese flag is the first moment of stillness. Kyodo via AP Images

Olympic opening ceremonies come with certain expectations: large-scale choral movement, overhead camera work (Busby Berkeley on steroids) and fireworks. This year’s ceremony ticks all these boxes. According to the commentators, there are 694 fireworks in the opening moment alone.

Heavy with symbolism, Channel Seven’s commentators leave little room for the viewer’s imagination. From the opening image of a blossoming seed, every symbol is explained.

Performed under stadium-spectacular lights and music in front of a giant glowing effigy of Mount Fuji, the program is a series of discrete sequences.

For an “in memoriam” that references both the Israeli delegates murdered at the 1972 Munich games and those lost to COVID, dancer Mirai Moriyama epitomizes the power of one individual. Mirai Moriyama’s dance epitomizes the power of one individual. Kyodo via AP Images

From this somber reflection, we are abruptly transported to a representation of life in Japan’s Edo period. A stylized ensemble routine of building accompanied by a traditional work song morphs into a troupe of tap dancers.

An integration of ancient and contemporary, and the interplay between the individual and the ensemble, reverberates throughout the ceremony. A single violinist tuning up is gradually joined by other musicians to become an orchestra.

It is a fitting parallel to the coming together of the world’s athletes to create the Olympics.

The parade of athletes is a sweetly shambolic affair. 205 nations later, the artistic programme resumes with its diverse snapshots.

Here’s an ensemble of clowns portraying the world’s media; now here’s some dancing children moving colorful boxes. Look up in the sky, there’s a ball of 1824 drones of light transforming into a rotating globe! Now, here’s some children, representing Asia, singing the Lennon/Ono classic Imagine. But wait, beamed in from some heavenly white void now they’re joined by Angelique Kidjo representing Africa, then Alejandro Sanz for Europe, John Legend for the Americas and finally, Keith Urban for Oceania.

Less of a linear narrative than previous opening ceremonies, this is a series of isolated, discrete sections. Less a celebration of the host country (although it’s unmistakably Japanese in tone and style) this eclectic mishmash of styles and performances becomes a durational performance where you can wander in and out.

The official speeches prior to the formal opening reference “the unifying power of sport,” the inclusion of refugee athletes and the adaption of the International Olympic Committee’s motto “Faster, Higher, Stronger” to include the word “Together.” “Together” speaks to a world lingering in the residue of COVID-enforced separations. Given the austerity of the times the ceremony is relatively subdued, but the optimism of the speeches is matched by the overriding exuberance of the performers. Not drowning, but waving (and there is lots of waving).

There’s no room for cynicism; only high-pep energy. The ceremony is very genki (a Japanese word without a direct English translation, roughly meaning “energy” or “pep”), slightly kitsch, but presents a surprisingly diverse representation of contemporary Japan. The creation of 50 pictograms is equal parts low-fi and hi-fi, and totally camp. The Yomiuri Shimbun via AP Images

The brightest spot in the post-parade section is an animated performance of pictograms depicting fifty sports. Moving the pictograms from two to three dimensions via a kind of human-puppetry meets real-life stop-motion animation, it is equal parts hi- and lo-fi and totally camp.

Its complete weirdness makes it un-look-away-able, as minor human errors show it for what it is: real people in real time, operating within a framework of precise choreography smashed up against the reality and vagaries of live performance.

It is completely compelling. Then, just when you think they couldn’t add any more eclectic ingredients to the mix, enter performers from that most Japanese of ancient art forms Kabuki, paired with an embodied performance from contemporary Japanese jazz pianist Hiromi.

Beginning with the requisite video collage tracing the journey of the torch from Greece, we watch it enter the stadium and hand over person to person to the sounds of Ravel’s Bolero. There’s a moment’s respite from the slick technology and choreography when it lands with Japanese baseball legend and octogenarian Sadaharu Oh.

In this human moment, we are forced to slow down and experience the world in his tempo, giving a true sense of what it means to be alone together. As the torch makes its way around the stadium, time slows. Ondrej Deml (CTK via AP Images)

If a performance needs a big ending, then this one delivers with the appearance of tennis player Naomi Osaka to light the cauldron.

As explained by Kumi Taguchi in Channel Seven’s commentary, the choice is particularly significant because of Osaka’s hafu status (literally the Japanese word for “half”) as a person of mixed heritage. For this reason, Osaka has not always been accepted in Japan’s notoriously homogenous society.

Another significance ringing in the air around Osaka is the worldwide attention she recently received for speaking about the impact media scrutiny has had on her mental health and the vitriol which she has been subjected to as a result. These factors all contribute to making Osaka an unexpected and inspired choice.

As the symbolic Mount Fuji opens up and she ascends its internal staircase to the cauldron, Osaka lights the fire around which we can all gather for the next 17 days. And so, with yet another human moment, the games begin.

This article was originally published by The Conversation on July 24, 2021, and has been reposted with permission. To read the original article, click here.