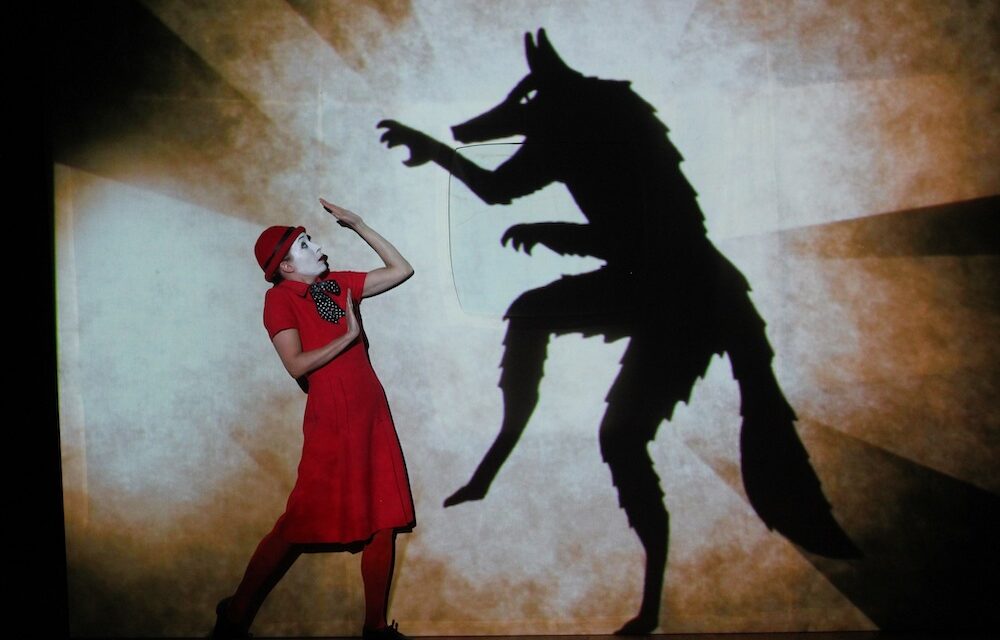 Genevieve Dunne in "The Animals And Children Took To The Streets." Photo: Alex Brenner

Whenever I hear the word “cosmopolitan” I think of Europe in the 1920s: German Expressionism, Russian Constructivism, Czech eccentricity, DaDa everywhere, Italian Futurism and French Surrealism. With music from Weimar cabaret and visuals by Soviet agit-prop. Let’s take an imaginary train journey from Paris to Berlin to Zurich to Prague to Milan. It is the world evoked by The Animals And Children Took To The Streets. This filmic theatre show, the second created by 1927 theatre company, was first staged in 2010 at the Sydney Opera House and the Battersea Arts Centre, and since then it has not only been remounted at the National Theatre, but has also toured all over the globe. Now it returns yet again, this time to the Lyric Hammersmith, where it retains all of its lyrical panache.

Written and directed by Suzanne Andrade, the story opens in Bayou Mansions, a dirty tenement block on Red Herring Street, on the edge of an unnamed European city. It’s a slum. Life here is shit. It is crawling with dirt; there are rats; there are cockroaches. The people are poor. Some are perverts; others are racists. But what’s this? Oh, a group of feral kids… probably up to no good. They make noise and smash windows. Meanwhile, Agnes Eaves — a liberal, middle-class do-gooder — and her little daughter Evie move into the block. Agnes wants to help the kids by providing them with arts and crafts. But the ungrateful brats just break up her Art Club.

One of them, Zelda, spawn of a drunk and petty crim, organizes a special gang of child-pirates — decked out in bandanas and eye patches — who go on the rampage. Zelda’s manifesto is the politics of envy: her repeated cry, “We want what you have out there”, shows that the poor kids are ready and willing to expropriate the rich. They take over a middle-class park, the pride and joy of the city’s mayor, and then they go too far: they kidnap the mayor’s cat. So he fights back, armed with sedative sweets and, like a modern-day Pied Piper, the ability to entice the kids, including Evie, away from their slum tenements to a sinister rehabilitation center. Can Agnes, helped by the Bayou Mansions’ kindly old caretaker, find her daughter alive?

In 70 minutes, this exciting fantasy tale is told using a mixture of only three actors (Genevieve Dunne, Rowena Lennon and Felicity Sparks) and continuous animated projections, to the insistent and lilting sound of music. The effect is truly wonderful: a beguiling atmospheric picture show which conjures up Central Europe of the 1920s, contemporary graphic novels and even a dash of good old English pantomime. Sometimes comedic, sometimes slightly melancholy, the play brings to mind the image of the little person who is pitted against authority, of individuality against conformity. You are reminded of Charlie Chaplin, or Emile and the Detectives. Both Agnes and the Caretaker are essentially powerless, archetypal little people, yet they must take on the frustrating bureaucratic rules and regulations of power as they cross the city in their quest for little Evie.

While the mayor deploys gum drops laced with debilitating drugs (a chemical cosh), the stakes rise as the contemporary significance of this urban fairy tale sneaks into your consciousness. For the story evokes a past when kids were free to play in the streets, when being naughty was inconvenient rather than dangerous. It also suggests that children are still objects of suspicion. Whose autonomy we fear. And, as you’d expect from a company that calls itself 1927, there is a lot of historical resonance in the visual aesthetic: some passages are reminiscent of Soviet-style iconography; others bring to mind the worlds of Franz Kafka or even Kurt Weill; Fritz Lang hovers somewhere on the dystopic edges of this creation.

There is a feeling of Grosz-like vividness in the cartoon quality of the animations, which are often busy with crawling cockroaches while the humorous words summon up the stinks of poverty. The Caretaker acts like a narrator throughout, but Agnes is the main protagonist whose middle-class sense of justice and idealistic desire to help the underclass is put under strain. I loved not only the yellow-tinged squalor of Bayou Mansions, but also the bright greens of the wonderful park, and the silhouetted figures of the children and the various animals. Some of the best bits are pure shadow play. At one point, there is a lovely dog, performing tricks, and a poor unfortunate cat. In one moment of typically visual joy coffins open to reveal twitching skeletons and then transform into ringing telephones. Great!

The words by Andrade are both gently comic and satirically incisive, while the film animation and design by her co-creator Paul Barritt gets a lift from Lillian Henley’s music. The three actors have clown-like white faces and interact perfectly with the projections and film. It really is brilliant entertainment. But what does it all mean? Originally, The Animals and Children Took to the Streets seemed to predict the social unrest of the 2011 riots; today its vision of social despair and destined communities, of the division between shiny city and dilapidated slums, rich and poor, still rings true. And the device of offering two alternative endings is thrillingly ambiguous: on one reading, the story is a council of despair; on the other it is a Brechtian provocation. You don’t like our society? You have nothing to lose? Then go out, says this cartoon, and change the world.

The Animals And Children Took To The Streets is at the Lyric Hammersmith until 16 March.

This article appeared in Aleks Sierz on February 25, 2019, and has been reposted with permission.